BPMD – “It’s Going To Be Serious Musicianship, But With A Smile On Our Face” 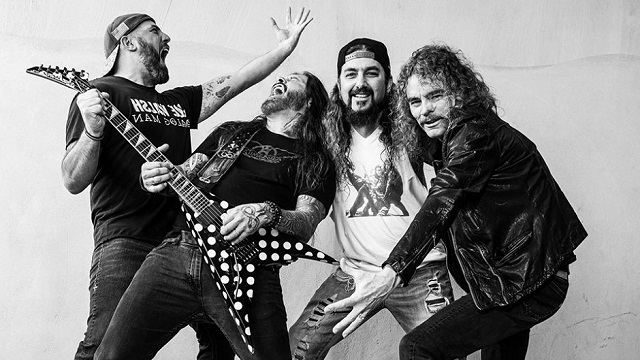 “Somebody sent me something the other day; it said ‘2020: it’s like looking both ways before you cross the street and getting hit by an airplane.’” The always affable and outgoing Bobby Blitz shared this, outlining the sheer ridiculousness and unfortunate craziness of 2020. With the world in a desperate shape, BPMD – the new supergroup composed of Blitz, drummer Mike Portnoy, guitarist Phil Demmel, and bassist Mark Menghi, have arrived at the perfect time to deliver fun and nostalgia with their debut record, American Made, out now through Napalm Records. A tribute to the greats of ‘70s U.S. rock, American Made is ten covers that combine well-known songs along with some “unknown” deep cuts.

The catalyst of the idea came from an unlikely source. Metal Allegiance bass man Menghi explains, “It actually came from the brain of an 8-year-old.” Referring to his son, now 9, he elaborates, “Last summer we were just hanging out, relaxing, fire pits, s’mores, and drinking beer. ‘Saturday Night Special’ came on and he just said, ‘Hey dad, you guys should cover this.’ I started thinking how I would perceive it if I were to play it. And then I started hearing it and was like, ‘Wow, this could be pretty cool.’ I immediately called Blitz off the cuff. It wasn’t like planned. I just called them while the song was still playing. And now here we are.”

Blitz was into it from the get-go stating, “That was the beauty of the whole thing was that the seed was planted by his son. Probably within the hour, [Mark] was on the horn with me and replanted the seed. Probably by the end of the night, we did suggest Phil and Mike as being the other guys. The momentum was what it was all about.”

Nothing was fully planned or fleshed out, and that goes the same for the band name; a combination of the four guys’ initials.

As Menghi suggests, “I believe it was spontaneous. I remember sitting at my desk just writing the letters; I just started writing letters down.”

Blitz further details, “I liked it just because it kind of was reminiscent of that era. There was other bands of that era that had initials for band names and it was cool to have that in our wheelhouse too.” 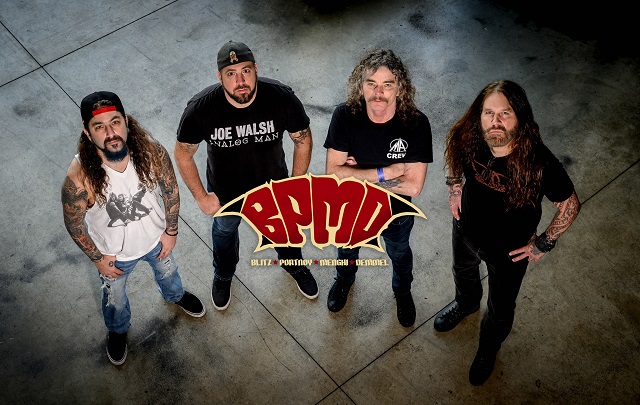 Lynyrd Skynyrd’s “Saturday Night Special” was the inspiration behind the formation of BPMD and naturally would be recorded for American Made and the “metalized” version of it reveals a riff similar to that of Black Sabbath.

Menghi agrees, “That’s kind of what I heard. Like what you’re hearing of our version of that is what I heard sitting in the backyard that night. I was like, ‘you know, that trunky riffing going on with the double bass in the presentation is what I heard.”

One of the positive aspects of American Made was not to rely on covering the hits from that era, but also digging deeper. Again, the guys make clear it wasn’t done intentionally, just happened to result that way.

As Menghi clarifies, “It wasn’t by design. We didn’t pick the hits like ‘Walk This Way’ from Aerosmith or ‘Dream On’; we didn’t pick ‘Sweet Home Alabama’ or ‘Freebird’ from Skynyrd, ‘Tush’ from ZZ Top or any of the Eliminator stuff. We went well-known, but kind of deep, and then there’s the case of ‘Tattoo Vampire’ [Blue Oyster Cult song], which I’d never even heard the damn song before or recorded [laughs]. We didn’t set out to avoid certain hits, we just did songs we wanted to play.”

Blitz concurs, “There was no brain trust. We didn’t sit down and say, ‘Oh, maybe this and maybe that, or let’s get deeper.’ It was real simple. Everybody gets two, the other guys have to do the picks of that member. There’s no debating it and then we’ll vote on two more. Shit, the song list was done inside of 20 minutes once everybody knew what was going on.”

There was also never a discussion or thought to record original songs; a thought that only occurred to them once interviews with the media started. As Menghi simply states, “We just had this idea to cover these great songs from the ‘70s. We were just focused on doing these songs and just having fun. That’s really all it was.” 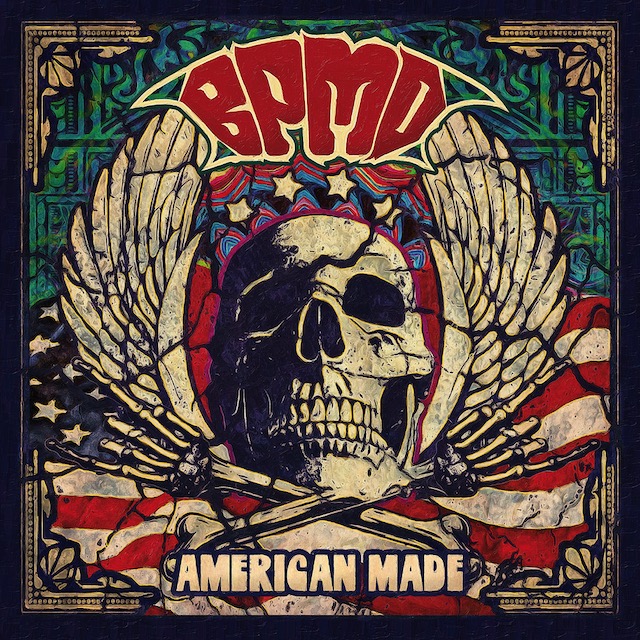 Another song kicked up a notch is that pesky “Tattoo Vampire” an under 3 minute tune from Blue Oyster Cult that turns full tilt into a thrash metal song.

Blitz discusses the track, “Let’s be real. The fucking thrash has always had that punk element to it or at least that energy that’s moving throughout much of the thrash presentations. So I kind of agree with you. I was really surprised with that song.”

Demmel’s picks were the most surprising for the guys, which was the aforementioned “Tattoo Vampire” and Van Halen’s “D.O.A.”

“I just never expected myself presenting either of those tunes; I had to channel my inner David Lee Roth,” laughs Blitz.

Menghi concurs, “Those were [the most difficult] for me too. I never heard ‘Tattoo Vampire’ before; it wasn’t so much challenging to play, it was more so knowing the parts.”

Demmel’s playing on the record is monstrous and is exemplified with that nasty riff featured on “D.O.A.”

Blitz praises efforts, “Phil really killed this record. He really rose to the occasion. He really brought a modern element to it. When we were doing the original recordings over at Portnoy’s, when we were getting the drums done, they were done like the ‘70s. He had completed the tracks within a day for the entire record. And that’s kind of the old school way of thinking, but Phil kind of brought this modern element to it. He kept the integrity of the songs and went back and schooled himself and learned how the presentation was going to be done, but did it with modern elements, I think which gave the entire process a re-imagined type feel and not just a cover, but a re-imagined cover.”

“When I spoke to the guys about it, I said we got to do the Double Live Gonzo! thing. We got to do something like and everybody was in agreement. So, I just kind of felt my way around and I didn’t really rehearse, I just picked some key phrases from the original introduction and went for it. It was really just a one-take thing. And it really kicks the door open when you press play on a record because, to me, it just says, ‘Okay, it is going to be fun. This is what it’s going to be all about. They’re going to go back into the ‘70s and re-imagine that whole era and they’re going to have some fun with it.’ It’s going to be serious musicianship, but with a smile on our face and a tongue-in-cheek approach,” Bltiz enthuses. 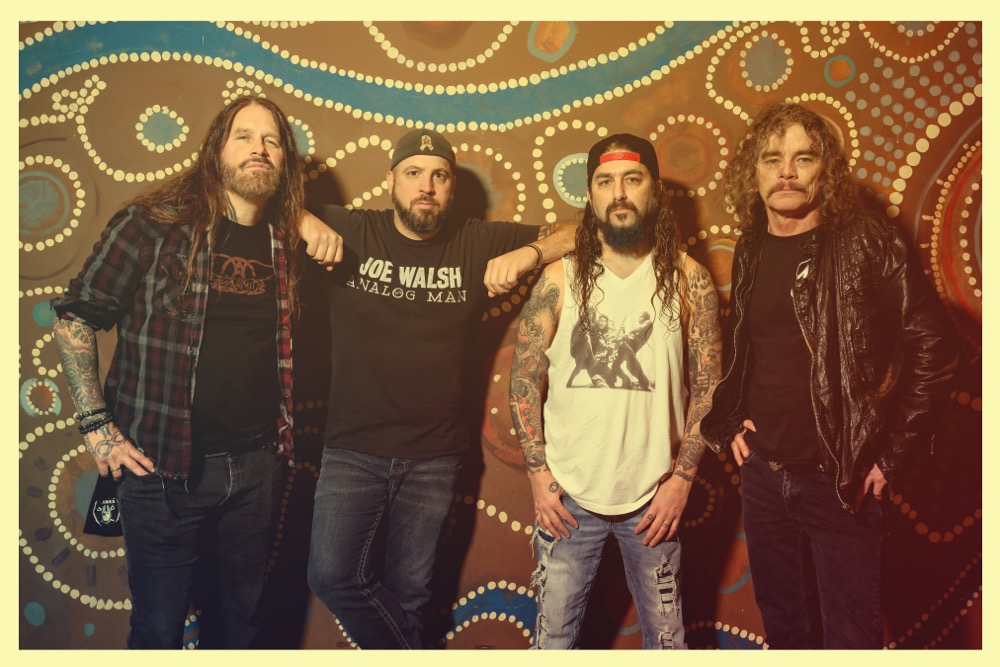 There’s also no replacement for live jamming in the room with the bandmates rather than sharing computer files to put the tracks together.

Menghi agrees, “You get the chemistry working together. That’s what made this record so special because were in the same room recording the drums, just jamming, arranging. Mike was recording and you hear that energy on the record. If this would have been done differently, like a quarantine project, like you see these different quarantined videos going around, there’s a million of them right now. They all kind of sound the same, but they’re fun to watch to see the different lineups of all these people. Again though, that energy, I liked the energy of getting into a room with people and just writing and recording and having fun that way.”

The Covid-19 pandemic has thrown a wrench into possible tour dates, but there are indeed plans to bring BPMD to a live stage.

“That was one of the big things that Napalm wanted. We thought Napalm would be a good home for us because of their diversity. They do a lot of different things, a lot of different artists on there. Sure metal, sure rock ‘n’ roll. They were interested in us doing shows and we said, ‘You know, we obviously have our own things.’ I mean, this is a band, but this is specifically a side, but we said we were more than willing to tour as long as it didn’t interfere with our other schedules. I think even Mark brought it up with regard to, ‘Hey, how about festivals? How about specialty shows? Short weekend tours? How about a week long? That’s the thing, let’s adapt to what everybody else is working with in their own projects at this time.”

Are there already plans for a BPMD 2?

“There’s legs for this project,” says Blitz. “It doesn’t just have to be, take the money and run, one-off and done. There are other places in the world we can go for the 1970s; we could do Made In The U.K. We could Made In Europe, Made In The World, Made In Canada; I mean we might not be able to make an Ecuadorian 1970’s [laughs], but for sure there are different places we can with this era of music, different locales, different countries, different scenes that inspired what followed it; the explosion of metal in the ‘80s.”

Before wrapping it up with the gentlemen, Blitz and Menghi provide updates of their main bands.

Blitz on Overkill: “We’re taking advantage of the downtime from the road and moving ahead with what we’ve done for fucking four decades or almost four decades. I love the normality around it because in a kind of an upside down time; it just feels right on a personal level to be working that way. I’ve worked with D.D [Verni, Overkill bassist] and the other guys for decades. We’re working on record number 20 at this point. Expect to see it in spring 2021.”

Mengi on all-star band Metal Allegiance: “Metal Allegiance is on sabbatical. We’re all over the place. So it’s hard. Alex [Skolnick, Testament guitarist] and I have been going back and forth on ideas and how we’ll take the next steps, et cetera, et cetera. So nothing urgent at this moment.”