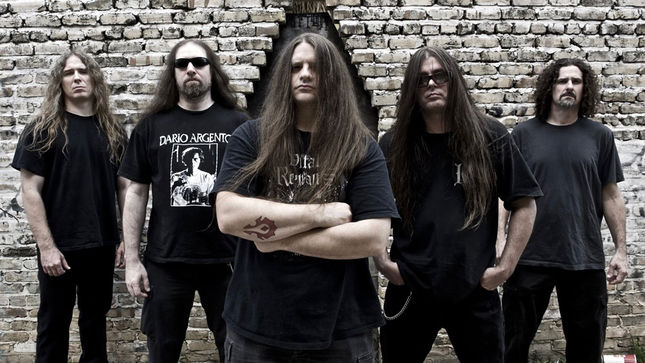 “We just took it to another level; it’s crazy,” proclaims drummer Paul Mazurkiewicz. Given the beyond impressive nature of the thirteen Cannibal Corpse albums prior to Red Before Black, achieving an even higher level of respect within the death metal community seemed impossible, yet that’s exactly what happened. “It seems like we’ve been doing that for the last four or five albums. We’ll come out with an album and everybody will say, ‘how are they going to top this?’, and we do. It’s just been getting better and better and better. Especially the older we get. You’re gaining knowledge as you go, and you’re trying to be the best you can be. We’re always trying to write a better song. All those things come into play and here we are – the best Cannibal we’ve been. It’s pretty insane.”

Producer Erik Rutan (Hate Eternal, Goatwhore) is also a significant component of the band’s sound. He helmed three Cannibal Corpse albums: Kill (2006), Evisceration Plague (2009), and Torture (2012). Then, Mark Lewis (Six Feet Under, Whitechapel) was brought in to produce for A Skeletal Domain (2014). Now, Rutan has returned and the band is back at Mana Recording Studios in St. Petersburg, Florida. “We didn’t know what we were going to do after Skeletal,” admits Mazurkiewicz. “The days of needing five guys to go to Sonic Ranch (in Alameda, Texas) – it doesn’t have to be done that way anymore, where everybody has to be there at the same time. We wanted to stay local; that was really our mindset. We didn’t want to go anywhere to do this. If we could have all recorded in our own houses, we would have loved that; with the families and stuff. The longer we can stay home, cause we’re going to be gone soon enough. So, when it comes down to who’s the guy close to us that can do this? Of course, it’s Erik – the hometown guy. I’m the farthest out at about an hour’s drive to get to the studio, which isn’t bad. Every day, I was able to leave in the morning, go and do my stuff, come home and sleep in my own bed. Then I could be on call, and still be at home. When my work as the drummer is done, I don’t need to be there for the guitars and bass. That really was huge for us, doing it local; not having to fly somewhere and stay in hotels. Erik makes great sounding records, and we were as prepared as we could be. We were a little more focused on what we wanted to achieve, especially with the guitar sound. Pat (O’Brien) really wanted to push his guitar sound more – and we obtained it on this record. Erik’s a great producer – not that any of the other ones weren’t – but it always comes down to the fact that he’s a death metal guy; he’s one of us. That always helps. Overall, everything went as smooth as could be.”

Looking at the Red Before Black tracklisting, “Only One Will Die” and “Heads Shoveled Off” seem to be pretty standard Cannibal Corpse song titles. However, “Corpus Delicti” immediately stands out as it’s a Latin term which translates to Body Of The Crime. “Actually, that is one of Rob (Barrett)’s songs. When we all do our brainstorming… I’ve written every lyric for every Pat song; of course, I’ve written some others for Rob and Alex (Webster) throughout the years. Rob ended up writing three songs on the album; he only did two songs lyrically. He always wants to do his own lyrics if possible; I had to step in and do one. But he really wants to come up with his own song titles as well. So, Rob came up with that title. I’d never heard of it – okay, why not? Something different. And it’s a really cool song.” 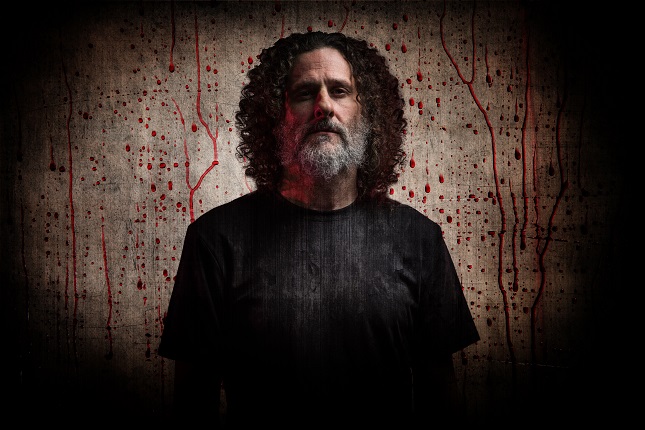 Picking a first single and video, specifically “Code Of The Slashers”, is no easy task. “That’s a tough one, when we’re talking about which songs to put out; the three the record label wants to put out. To me, you don’t want to put out the first song that opens the album. You want a strong song, of course. Everyone just decided to go with ‘Code’. It has a slow, cool intro, then it speeds up. That was our dilemma, because we think all the songs are cool. Any of them could have been the single. Metal Blade was talking about releasing ‘Code’ as a lyric video. We are totally against lyric videos! We just don’t want that. So, we made a video (which can be seen below) without us in it. When you look at it, I know people want to see the band playing in a cool setting. But at the same time, you’re not really playing. You’re faking it in a barn, or outside in a field. What’s more cool to me is the story. Seeing these visuals without any interruption of any band footage, is pretty cool actually. So far so good, nobody’s been complaining that they haven’t seen us in the video.”

“Destroyed Without A Trace” was written by Paul, and came about in a rather unusual way. “That was a fun one. I’m so happy the way that song turned out. When we finished touring last summer, we were done with the cycle, take a little time off. I just felt I had to start right away. I didn’t want to get complacent. I want to better myself, push myself, and I really have. But that’s how that song came about. Everybody else took a bit of a break, and understandably so. I went to the practice room by myself every day and started working on my own stuff. I set the metronome, and I came up with this whole song in my head. There was no guitar, but I knew what the riffs should be and where they should go; what I wanted them to sound like. When those guys came in, it only took two days cause I had it done, I already knew the arrangement. It’s crazy that the song came about by just me having all the drum beats and nothing else – songs never really come together that way. It was a first, and it’s one of my favourites.”

Red Before Black – which came first, the album title or the song? “We’ve got our sheets of paper, our lists of things – just trying to come up with cool phrases, words. This one, we were in the middle of this whole thing. Some songs may not have titles ‘til the very end. This album in particular was: Pat Song 1, Pat Song 2, Alex Song 1, Rob Song 1. That’s how we labeled them for so long. How Red Before Black came about… in the middle of the whole process. I was sleeping, it woke me up in the middle of the night – I swear! I’m the one that came up with the title. Red Before Black is so simple, yet so good. I remember going to practice the next day. It was just me and Pat that day, and I told him about Red Before Black; he liked it. We weren’t sure at that point if it was going to be a song or the title track. Basically, we put it on the list and it sat for a little bit. Me and Pat loved it; it didn’t seem like the other guys were freaking out about it. As time went on, I kept saying that I wanted to call the album Red Before Black. I kept on pushing – seeing blood before you die – Red Before Black. That’s how it came about. Then we decided to do the song. At that point, we weren’t certain if we were going to have a song called ‘Red Before Black’. Cause we don’t always have a title track. I think the song itself is catchy as heck. It’s a great representation of the album. I hope everyone likes it. I’ve never had something hit me like that, to where it means something.”

Then artist Vince Locke was given the title to create the cover? “This time, not really. I had a pretty good outlook of what I wanted to see. I was having a vision of the cover that we’ve got. Being looked down upon as the guy’s stabbing you. Blood is splatting everywhere, you’re going to die. You’re seeing that red before the black. That was a little more my vision. I gave Vince my ideas, we went through a few sketches to get the proper perspective. But that’s not how every cover works.”

Numerous Cannibal Corpse albums in the past have featured censored and uncensored artwork. It would have been easy to go – pardon the pun – straight for the jugular with Red Before Black, yet only one image was utilized. “It’s a tough call. We feel that it’s cool enough. I know, you can go completely – but then are we doing it just to do it? I don’t know. We really like the cover we’ve got. It’s almost like, leave it to the imagination. We wanted something different; not showing the victim and having the attacker.”

The digipak box set of Red Before Black comes with a bonus Blood Covered CD featuring seven thrash cover songs, including Metallica’s “No Remorse”. “All these covers are actually the ones that were done throughout our career, other than the ones we did with Barnes. These are all the covers we’ve done over the years with George (“Corpsegrinder” Fisher). They’ve been on various releases; they’ve just never been together on one disc until now. Basically, that was the record label. They wanted a bonus disc with the covers we’ve done. Okay, why not? The ‘No Remorse’ cover, that was the last one we did. But geez, was Jack (Owen) still in the band? We did that, I want to say for The Wretched Spawn. It’s not listed, it’s one of those hidden tracks attached to the last song. You look at the list of the bands we did (Sacrifice, Possessed, Metallica, Accept, The Accused, Kreator, Razor); those are our heroes, the bands we grew up listening to and loving, who influenced us to do what we do. Of course, we’re all huge fans of early Metallica. They changed our lives. We always wanted to do a song, an old song, and something that wasn’t done too often. We’ve always loved ‘No Remorse’, so we did it. I think it translated pretty well.” 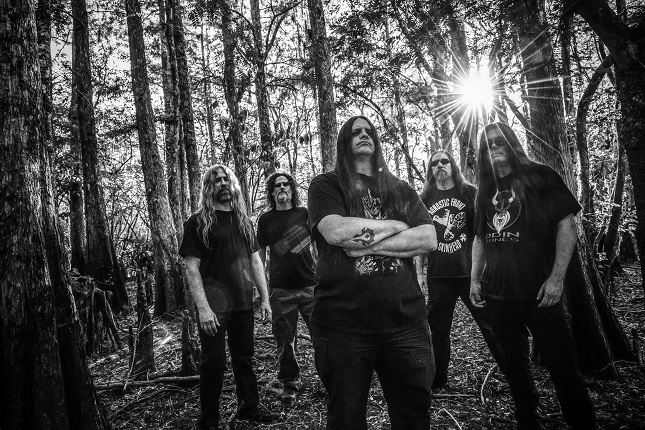 Formed in December 1988, Cannibal Corpse is quickly approaching their 30th anniversary. “I know, it’s crazy! We’ll obviously be out on the road. Most of next year will be on the road, but really, nothing major planned I don’t think. Just the fact that we’ve been around 30 years; still going and breathing. Like life in general when you talk to people our age (Mazurkiewicz is 49) these days. 30 years of course is a huge deal. It could end tomorrow, and it could go on for another 20 – who knows? We never thought we’d make it a couple of years, let alone 30. But we’re not the kind of guys to celebrate. For the 25th anniversary, we made a cool shirt, and that was about it. We’ll probably do the same for the 30th, make a cool shirt.”

After three decades in existence, it’s amazing that Cannibal Corpse is still writing new and vital material. So many bands, regardless of genre, who reach the 30-year mark are touring solely on their greatest hits, which came out 20 years ago. “It is crazy, cause we could be one of those bands too. We’ve got enough material, but we’re not like that. We always want to push forward and create. I think that’s what’s kept us around and going, not resting on our laurels and songs we’ve written in the past. We feel we’re getting better and better as we go.”