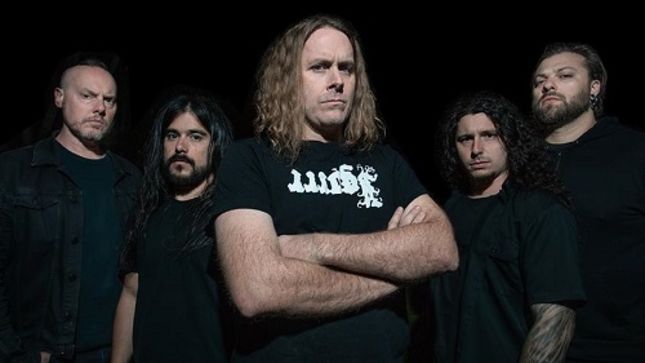 Change is in the air for San Diego death metallers Cattle Decapitation.

Weeks before the band embarks on a lengthy tour with Suffocation, Krisiun and Soreption for the emotional farewell tour of iconic Suffocation frontman Frank Mullen, Cattle dropped huge news that Belisario Diumzio (Eukaryst) and Oliver Pinard (Cryptopsy) were joining the group on a permanent basis. What’s more, the band announced that the follow-up record to 2015s epic The Anthropocene Extinction is due for the fall of 2019.

“We’re really excited to be back on track,” vocalist Travis Ryan shared with BraveWords. “It’s really nice to be back in the creative process again, to be honest.”

A fixture of the American death metal landscape since the mid-‘90s, Cattle Decapitation has been churning out uncompromising and poignantly shattering albums for over two decades. The group has been evolving and raising the bar with each passing record, with the pressure on to top each outing and outdo a growing standard of greatness that refuses to be compromised or short-changed. 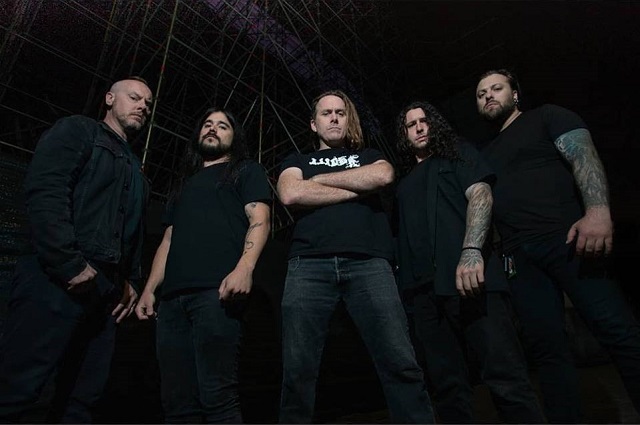 “We felt that way after Monolith. We feel that way with the new record,” Ryan says of the pressure to make a complete album. “One of the things that made Monolith special, the one thing is we had new blood in the band that was hungry at the time. That was nice and that helped propel things musically. At the time, personally, I was getting kind of bored doing the same old shit, six or seven albums into our career. I’m 43 years old and started feeling like there was less and less to lose. Without alienating the fans, do what you feel you want to do. Sometimes it works, sometimes it doesn’t with people. This time it worked. We felt we had our work cut out with us for Anthropocene, and the next album. I’m back in the mode of wanting to do something different.”

The exit of eight year bassist Derek Engemann, entrance of Oliver Pinard and addition of a dueling guitarist for the first time in Cattle history in Belisario Dimuzio presents the best case scenario for an all new, revamped and retooled Cattle Decapitation, something Ryan in particular expressed excitement towards.

“I prefer that. That’s the thing, it’s a dance you have to do, doing something fresh and new while trying not to alienate the fans. We still have to sound like ourselves. We can’t come out with a reggae album, as much as I love reggae. You can’t just stop on a dime, you have to call it something else. Our stuff has been a very slow evolution of progression, but mostly an evolution. We sound absolutely nothing like we did on the first couple of records. There’s a spice in there that is ours that I think still is in there today, even though it at face value doesn’t seem to have much to do with our previous output. It still makes sense, it’s still us.

“Obviously touring with (Belisario) that many times you get to know somebody, feel them out and he’s a great musician,” he adds of the new members. “With Olly, he had filled in with us a couple of times in the past. Ever since then I’ve always thought he’d be fucking awesome to jam with one day. We’ve been on the road with him, so to speak. He’s such an awesome fucking dude, a nice fucking dude. We need that. We have a good rapport with each other and we need that, pretty much.” 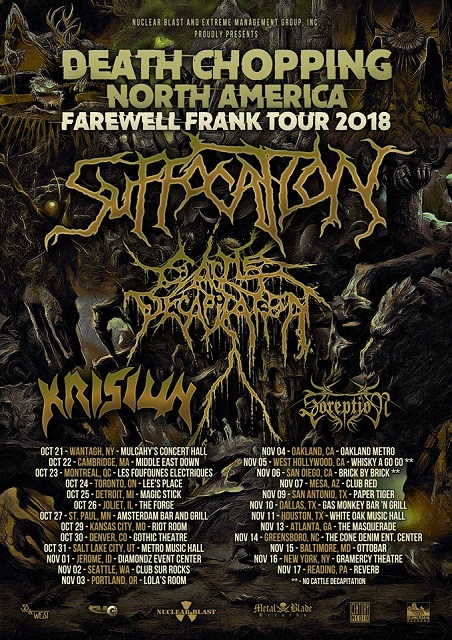 Cattle Decapitation are gearing up for the farewell tour of longtime Suffocation frontman Frank Mullen, who will close out his iconic career as one of the preeminent vocalists in death metal with a lengthy tour this fall.

“Frank always had that quintessential death metal vocals,” says Ryan. “I know a big reason why fans have wanted to see him on stage. They’re a New York band. When you hear him it’s very New York. There’s not enough prominent bands from the region who have that sound.

“I personally felt that this is a good move for them to make,” he adds. “If he doesn’t want to tour anymore, to give the fans one last thing, I think it’s a really cool idea and cool that he’s doing that. The guy has had a really good job and a family to take care of for many years now. Every move that guy has made I feel has been pretty admirable. Everybody wants to hang in there and do this but the guy has a family and a future to think about. Kudos to him for doing what I think is right.”

As for new material, while we’re over a year away from album number eight, Ryan gives a pre-cursor to what fans can expect.

“The stuff is sounding really punishing and super sick. Bel came on as a songwriter. We have more hungry blood in the band, so I think it’s going to be sick. It’s a long time before it comes out, but trust me. I have all of my stuff ready to go except for the lyrics. I have the concept and the title and all that kind of stuff ready to go. Even the CD layout.”