DESTRUCTION – Four At The Devil’s Door 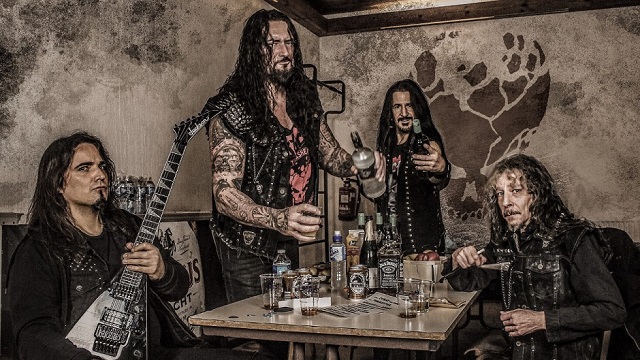 When German thrash legends Destruction reunited 20 years ago and released All Hell Breaks Loose in 2000, BraveWords (then BW&BK in print form) was all over it. In retrospect it wasn't their best album, but it signaled the return of frontman Marcel "Schmier" Schirmer after 10 years away and a reboot of one of Germany's Big Three, which was a very welcome occasion after Kreator weirded everyone out with Endorama in 1999. Destruction received an unfair amount of flak for All Hell Breaks Loose from the "metal is dead" media factions still hanging on to the drab heavy music mentality of the '90s, but just as HammerFall put power metal back on the map a few years earlier, Destruction's comeback heralded a new age of German-engineered thrash, with long lasting results.

It's fair to say that Destuction is more relevant now compared to when they came back, maybe even more so than their '80s heyday. Schmier agrees.

"When we came back thrash metal was basically dead. At the end of the '90s it was all about melodic death metal, and some magazines were wondering out loud why Destruction was doing a reunion. I think we managed to be relevant again, and I don't know what would have happened without Destruction's comeback. We did that tour with Kreator and Sodom back in 2001 and it put Kreator back on track. I remember Mille (Petrozza) called me after they released the Endorama album - which is when we did All Hell Breaks Loose - and he was saying 'Dude, I don't know where to go. The last album was weird... what should I do?' I remember we met up in Essen in a rehearsal room and we talked about the tour, about the direction of the bands, and the future of thrash metal. The tour was a big success and since then Destruction has been back on track, and so has Kreator."

"We just toured with Overkill and it was amazing," Schmier continues. "Shows were sold out everywhere and nobody expected it to be that packed in so many places. And the thing is, the old bands still deliver. Listen to the latest albums from Overkill and Death Angel... all the old cats are still around and they still deliver. I think it's a bit difficult for the younger generation to shine, but their time will come. It's great to see that all of the older thrash bands are doing well. I grew up with this sound and for me, nothing beats thrash metal. Now it's a great vibe (on the scene) in general. When we were growing up we always looked to the American bands because they kick started the thrash sound. Over the years we became friends and toured together, so to tour with Overkill and Flotsam And Jetsam really recaptured that young energy." 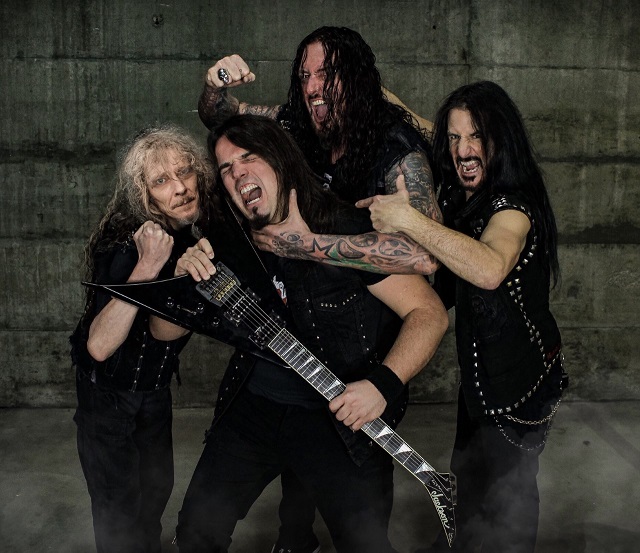 Born To Perish is another milestone in Destruction's career in that they have returned to being a four-piece band, something that hasn't been the case since 1990's Cracked Brain album (which didn't include Schmier). It's particularly noteworthy from a BraveWords national pride point of view in that they got themselves a Canadian drummer, Randy Black.

Black has a history with Destruction dating back to 2015, when he filled in for Wawrzyniec "Vaaver" Dramowicz on tour in the interest of Vaaver's commitment to family. He was brought on board for Born To Perish as a full-time band member.

"When Vaaver was starting to have problems with being able to go on tour, I talked to Mike (Sifringer / guitars) about asking Randy to fill in because he already knew how to play the whole set. And you know Randy, he's always well prepared and constantly in the rehearsal room. He knows the songs better than we do (laughs). We talked to Randy about filling in for Vaaver because we didn't want to cancel any shows, and we ended up touring the world with him. The chemistry was there, the playing was there because Randy is an amazing drummer, but we also had some of our crew guys come to us and talk about Randy joining the band because they think he's great. It was just a natural process to have him join the band because everything fit. We actually did audition a German drummer before we made the decision, but the Canadian won (laughs). Randy was laughing because he said to me, 'Dude, I'm over 50 and now I have to learn all these fucking fast songs, so I have to take up jogging..." But now he can stay fit this way (laughs). It's a big challenge as a drummer playing in Destruction. Randy told me that he played the craziest shit he's ever played in his life on this album. But, you can hear that he had fun doing it."

"Randy brought in some drum pattern ideas for the album," Schmier adds. "We've never written songs based on drum tracks before, but Randy came in with some really cool patterns that we made songs from. One of those songs is actually the title track. The thing is, some songwriters like to do their own stuff so that nothing changes the style of a band, but we gave Randy every chance to contribute and he loved it because he wasn't restricted. Of course, the songwriting came down to Mike and me, but for the new guys we let them do their thing. We worked as a team, which was important, and the album turned out great."

Swiss guitarist Damir Eskic, a close friend to the band, has also been added to the Destruction line-up. It wasn't a calculated move by any means, but Schmier does look at it as a very good idea at this point of the band's career.

"We've been struggling with the idea of getting a second guitar player for the last few years; should we do it or not? On the one side there is this cult thing about being a trio, and there aren't many power trios left. We started with Rush and Triumph, Motörhead and Venom, and we became one which was great because three guys get along better than more (laughs). Fewer opinions, you always find a solution to a problem. Also, it was a challenge being just three guys being a tight unit and making a lot of noise. Mike is a great player, but playing live or writing songs, we were limited by some of the things we could do with only one guitar. So, we talked about getting a second guitar player but it had to be the right guy. This time, Randy was in the band, the songwriting was going well, we talked about it again and I said 'If we don't do it now, we might never do it.'"

"I was at a Kreator show with Damir and Mille asked me 'Is this the new guitar player for Destruction?' I told him no, Damir was just a friend, but Mille knew he was a great guitarist and asked me why I didn't bring him into the band (laughs). I never thought about it before because he's been close to the Destruction for years now. So, the next day I called Damir and told him I had an interesting idea about a second guitarist for Destruction (laughs). It's one of the best decisions we've made in years; the live shows have been amazing, the chemistry is great. We all get along so well it's actually kind of scary. Sometimes changes are necessary but I think we needed to do this for the good of the band."

Having Eskic on board definitely fattens Destruction's live sound, and it gives Sifringer a much needed break from having to carry the show on his own...

"Yeah, and now that we have it we're wondering why we didn't do this earlier," says Schmier. "Damir is also a fantastic solo shredder - he's a guitar teacher and has all the skills - so not only does he fatten the sound and bring out the melodies, he can also play the leads. And with a fourth member on stage there is a lot more action for the fans. So the band is more like a fucking tornado now (laughs). I was a little worried that fans would be pissed Destruction isn't a power trio anymore, but the fan reactions on tour were amazing. They loved it, and Mike loves it, too. If you're just one guitarist and having a bad day, it can be a bad day for the whole band. So you're absolutely right... the weight on his shoulders is gone. I can tell he's enjoying having Damir in the band because he's having more fun on stage." 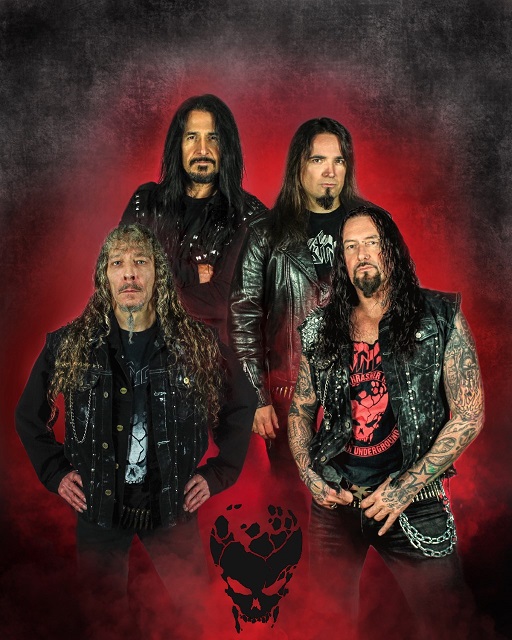 Schmier makes it clear that Eskic, like Black, is a full contributing member to Destruction. There were no half-measures going in to make Born To Perish.

"We recorded the first two songs before Damir joined, but we got him in there early to check out some leads. He wasn't involved in the writing process but he was in the studio to put his parts down with the band. He was actually afraid of putting too much in to the solos but I wanted to break him in on this album. It doesn't make sense to have a second guitar player and then you don't hear the second guitar player on the album. Even are producer asked 'Are you sure you want to put in that many guitar parts?' But it was important to have Damir involved. And he has a lot of respect for Destruction's legacy, and he feels the music, which is very important, so it was great having him involved."

As for himself, Schmier went into Born To Perish with a definite idea of what he did and didn't want for this new era of Destruction destruction.

"We always keep an eye on our past, and this time I listened to the previous album before I started writing for Born To Perish. I asked myself what I wanted to hear from us this time, and tried to keep the songs more basic. I realized that some of the stuff we've done over the last few years doesn't work that well live. When we rehearsed the first couple new songs, it felt so good because they really have a great flow. It was important to recap what we did before and realize what didn't work on the last album. Born To Perish is punchy as fuck, and I think it's flawless because we got the optimum out of the songwriting process."