FRANCIS BUCHHOLZ Talks MICHAEL SCHENKER Collaboration, Revisits SCORPIONS Years - “I Was Fed Up With The Music”

When Michael Schenker revealed to the world in 2013 that he had convinced the legendary Scorpions rhythm section - drummer Herman Rarebell and Francis Buchholz - to bang heads together once again under the moniker Michael Schenker’s Temple Of Rock, fans most certainly did a double-take. This was the first time since the treasured Lovedrive album in 1979 that the trio had worked together. Hence the name of that debut, Bridge The Gap. And that's one helluva gap! The latest album, Spirit On A Mission, sees 12 new Schenker-penned driving guitar tracks, with the bombastic backbeat of Rarebell and Buchholz once again. Yes, lightning does strike twice!

Most musicians would give an arm to have a resume like Buchholz. Think about it. Although he left the Scorpions in 1992; those 18 years and 12 albums worth of material saw nearly 70 million in sales worldwide.

But I must pull a quote from my past. It was during an interview with Herman Rarebell a few years back (here) that I was able to share of my favourite (and first!) stories as a music fan. It was 1984 - the Heavy Metal Hurricane visited Toronto's CNE Grandstand stadium on a hot n' sweaty day in August - the 17th to be exact. I was a pimply-faced kid that decided to hop on the bus from a Northern Ontario town and witness one of my first live shows, Scorpions supporting their massive Love At First Sting Album. I recall running to the front of General Admission area, literally about two feet from centre stage and grasping onto the security barrier with a high school buddy of mine. We were locked and not loaded ... locked in for Kick Axe, Helix, Quiet Riot and of course the hurricane itself, German hard rock icons the SCORPIONS. The feeling was indescribable. Seeing our heroes eye-to-eye - mere spitting distance away! We did the 'Heavy Metal Shuffle', fist-pounded 'Rock You' and screamed 'Bang Your Head' with the 25,000-strong. Our vision was so close that a photographer was begging for our spot. No bloody way. We've earned this turf and there we stayed - no piss break, beer break, nothing, for hours. My ears bled for days. 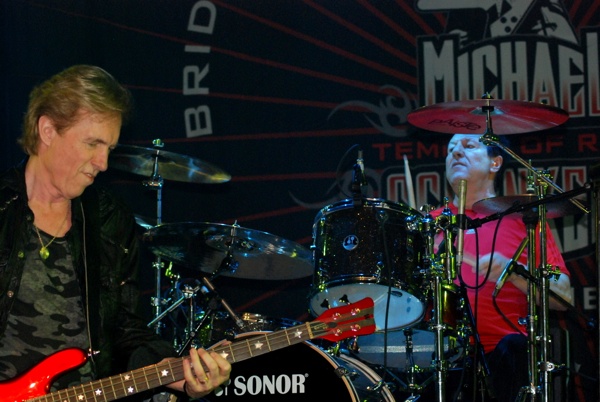 Fast-forward to the present…

BraveWords: I remember that entire CNE show so vividly and it was over 30 years ago! I was so excited. I'm almost certain you and I made eye contact; we go way back and you don't even know it (laughs). But there is so much to talk about. First that comes to mind is that you actually disappeared for awhile.

Buchholz: “Yes. I was fed up with the music. I was fed up with being in the group with all this internal fighting and turmoil that was going on after spending so many years together. So, at that time, I became a father of twin girls, and I already had a year and a half old child. So, I decided that was what I was going to focus on. I removed myself from the world of rock and into the world of family life. I also still had business to attend to, the difference was that I didn't play. I put my instrument in the corner and it just sat there. I had my small studio and a PA rental company in Germany that was the biggest one and very successful. So, I kept busy. I was sick of the music, and obviously wasn't touring or recording any longer. But, now I'm back into this circle.”

BraveWords: I was fortunate enough to have an interview with Michael Schenker recentlyand he was explaining to me how he just felt he needed to leave the band on the brink of massive success and he was satisfied with that. It's not the same story with you, but you chose another path.

Buchholz: “At that time, within the band, we had problems. The band was split into two.”

BraveWords: Who were the halves?

Buchholz: “I was the one half, and there was the other half (laughs). There were lawyers involved and shit, and I just couldn't take it anymore. I had to make up my mind of either being a heavy musician or being a free man. I always felt that being a free man was more important than anything else; freedom is what I need, and there was no freedom anymore. We had new management come in as the old management was fired. There was a lawyer coming in as a manager. So, it was either live with that or don’t.”

BraveWords: It all comes down to money. Everyone loves money but it draws in evil bullshit.

Buchholz: “That's right. I do this for fun. I started because I like it. It's not about the money anymore.” 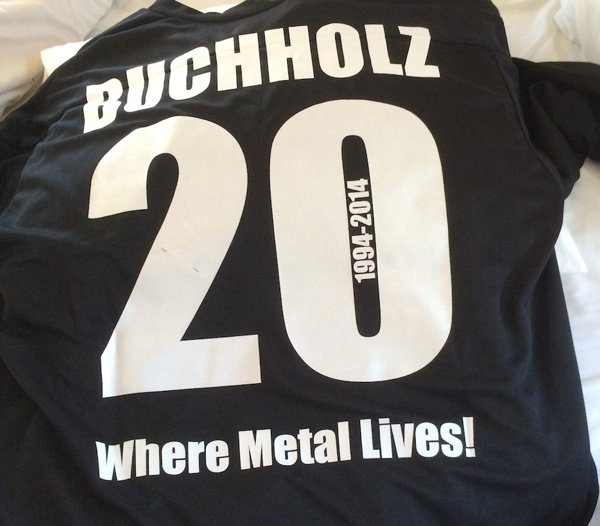 BraveWords: Yeah, it's definitely not about the money these days.

Buchholz: “I like playing with these guys and we have a great bond as musicians. I am very happy with them.”

BraveWords: What is your relationship like with Herman and Michael these days?

Buchholz: “Herman is my brother. We have played in the Scorpions for many years together. I mean, we were enemies for a certain time, but now we are closer than ever. It's very good. With Michael, it's a very different situation. He is a loner. He goes his way.”

BraveWords: He is very spiritual.

Buchholz: “Yes, and he is a genius guitar player. I love what he is doing. I love his art. I love him as a human being. I have known him since he was 17. I was living in the house with my parents, and next door was a flat with a drummer living there. They often had parties and Michael would come to those parties. Michael had very long blonde hair, and I've known him since then. That was, I think, around 1970 or something. I can't recall if the Scorpions were already formed at this time or not.”

BraveWords: Is there talk about writing more music together?

Buchholz: “We did not collaborate on writing for this album because Michael wrote all the songs. This is Michael's band and his idea. We did talk about collaborating but it did not happen this time. Michael wrote the music and Doogie White (current vocalist of the Michael Schenker Group) wrote the lyrics. They sat together in Great Britain and I sit in Hanover, Germany.”

BraveWords: You have done so much in the history of music, what is there left to conquer?

BraveWords: How do you view the industry these days? With all the debates about digital downloads and whether or not to do a full record or just singles?

Buchholz: “To me, it doesn't matter. In the old days, people used to take the music from the radio. As a child, I used to have a tape recorder and my microphone in front of the radio and record the music. My mother would open the door and say 'Francis, it's time to eat', and I would be 'ahhhh! I am recording here!' (laughs). So, times haven't changed really; people still like to get something for nothing. When they have a chance to get something for nothing they just take it. Really, it doesn't matter to me. I mean, I have made lots of money from the sales of our records, so now it's not really a concern for me whether our records are profitable or not. That said, times are changing, and it will become harder and harder to steal music.”

BraveWords: What's your relationship like with the rest of the lads in the Scorpions these days?

Buchholz: “There is no relationship. Music is something we do together.”

BraveWords: Fans, when they look onstage, see a family, but that's not the way it works.

Buchholz: “Let's put it this way: it works as long as there is a family feeling there. But, if that feeling is no longer there, and you pretend to be family, then it shouldn't continue. When you continue to do this only for the money then you have to decide this for yourself. For me, the decision at that time was not to continue and to be with family and not live out of suitcase. It had all become a headache.”

BraveWords: What is your proudest moment from that era?

Buchholz: “For me, it's just playing onstage that I experience these moments. In fact, I had the moment earlier today, just playing bass onstage and having everything sound great. Those are, for me, the most important moments. It doesn't matter if it's 100 or 100,000 people. Of course, it's easier to reach more people when you play in front of 100,000; you have more effect. I mean, obviously it's to our advantage to play for more people, but I would rather play a great show to 100 people than a shitty one to 10,000.”

Buchholz: “Really, I have never thought about that.”

Buchholz: “Yes, the answer if very boring (laughs). Looking back at all those moments I have lived through, perhaps it could be something like being on the tour bus at 5 AM on a deserted highway from Los Angeles to Las Vegas and the sun coming up. I don't know. There are so many great things we have done. For example, we still had the Iron Curtain in Europe when I was a boy. Living in Germany at this time there was always this great threat of a third World War between Russia and America. I was always afraid of the Russians coming over the border in Eastern Germany, which was Russian controlled, and was only 80 miles away from our home. We were always scared that the Russians would come. Then, playing in Moscow at the Peace Festival back in the 90's, we were invited to the Kremlin by Mr. Gorbachev, Russia's President at that time, and that was one of those great moments - to think we had achieved something like this just from doing what we love to do.”


BraveWords: Now, that's a beautiful answer... you did it!

BraveWords: Do you have any Canadian connections, such as friends or family?

Buchholz: “We had a babysitter who was from Montreal. When our twin girls were very small, we looked for a babysitter. At that time, there was this exchange program between Canada and Germany, so we ended up with a Canadian babysitter. I remember she sat at our house and cried every evening and locked herself into her room because she was so homesick. Her job was taking care of the babies for six hours a day. After that she was free, but she chose to go to her room crying. After three or four weeks, she came to our living room in the evening and watched television with us. That's when things changed. She was only supposed to stay with us for half a year, but she chose to stay another half year.”

BraveWords: Are you still in connection with her?

Buchholz: Yes. When our children had their high school graduation, she did a European trip at that time with her boyfriend and visited us at the graduation. So, yes, a Montreal connection.

BraveWords: “Montreal is certainly a world onto its own in Canada. In terms of heavy metal and hard rock, that's where the bands are going to go.”

BraveWords: Thank you so much, this is a beautiful occasion for both myself and BraveWords.

Buchholz: “Thank you, Tim, it was a pleasure.” 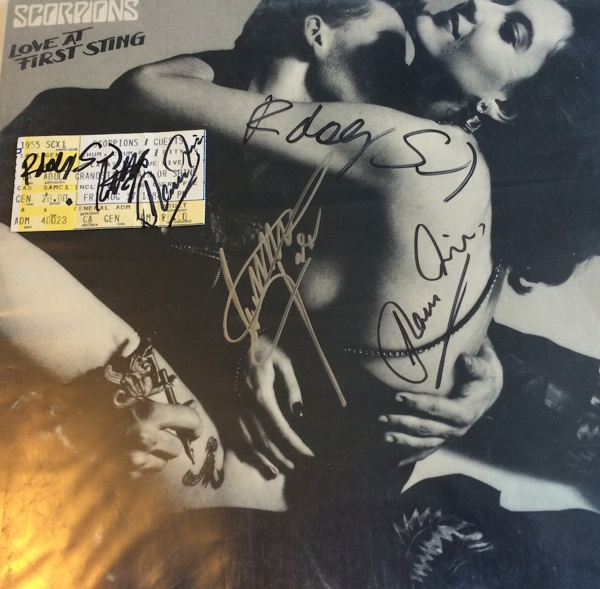