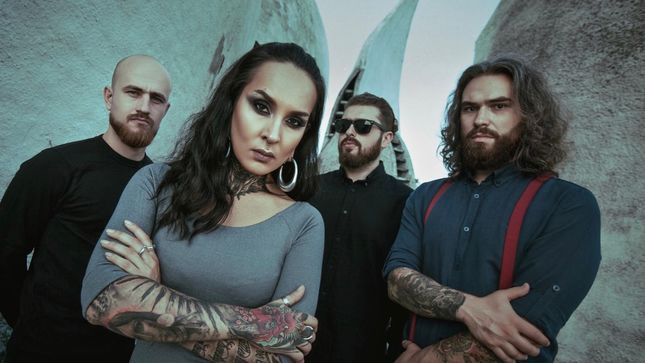 Ukrainian metallers Jinjer are again feasting on the bounce of killer grooves on their new album Macro, out now via Napalm Records. Their fourth full-length record; Macro follows up the Micro EP and is a strange combination of groove metal, metalcore, and nu metal with progressive tendencies. Singer Tatiana Shmailyuk spoke to BraveWords about Macro, the Ukrainian metal scene, her singing techniques, and how Jinjer came to play this curious style of metal.

BraveWords: How do you feel Macro compares to your past releases?

Tatiana: “Oh you know, it’s just like with kids, you love them all and you cannot compare them. I don’t compare our albums, you know? Like seriously, for me they are all great. They were recorded and released at their own, proper time.”

BraveWords: You had the Micro EP earlier this year. Were any of those songs found on the new record written as a part of those sessions?

Tatiana: “No, they were composed and recorded separately, I think six months between their recordings. The only thing that connects them

BraveWords: Were having the titles Micro and Macro planned out? Or did it just kind of happen?

Tatiana: “No, it just happened because I couldn’t find any better title for the EP, so called it Micro and then it’s a logical thing, you know? Why don’t we call our LP Macro? It’s just a trick. Nothing more, nothing less.”

BraveWords: You made the video for “Judgement (& Punishment)”, how was the making of that video?

Tatiana: “The director is a friend of ours and when we gave him the song, he just came up with this idea that we should make this some kind of horror story. I don’t know, I see this song in a different light, you know? But yeah, that was his idea. So we just decided not to stand on his weight and let him do what he does. It was long were always in a hurry. We filmed it in one day and that was kind of tough, but we had fun. [One of the clients] for the video was a professional actor and I was intimidated by that fact. I had to work with an actual actor and because I’ve never done this before, I felt pressure, but I think I handled it. I don’t know if it was okay for me, I’m not one hundred percent satisfied with what we got.”

BraveWords: The band really doesn’t conform to any genre, but at its heart it’s still metal. How do you guys go into crafting the songs? What is the recording process like?

Tatiana: “We basically have our habits in writing music. Each of the guys; they write riffs and songs. Some of them, like for example, our guitar player, he can write the song, the whole song, and bass player too. And our drummer Vlad; he takes part in composing too, like composing guitar riffs and melodies. They compose it; they record a rough sketch, the demo version and then they’d send it to me and I take a listen for maybe like ten times or maybe more. I’m trying to get the idea, the whole idea and the atmosphere and divide that it gives me and then I’m just writing lyrics to this goal. That’s how it works for us; they come up like really organic and naturally. They feel right, you know? (laughs)”

BraveWords: The way you change your moods and tones of your voice is incredible. How do you approach the songs vocally? How do you decide how you will attack a song and sing it the way you do?

Tatiana: “First of all, low mood swings is my thing. I change moods like ten times a day! So for me it’s sort of a reflection of my personality and it goes really good. I can feel where to change my vocal parts. But usually, if we’re speaking about Macro and Micro too, I recorded right in the studio. Like basically, I just had lyrics that were not even finished and I came to the studio and I was fucking nervous because I didn’t have any blend, any vocal parts in my head. I basically, like eighty percent, maybe eighty percent or seventy percent of the album, I improvised. It came naturally!”

BraveWords: That’s incredible! When did you discover you could sing and how much work did you have to do when seeing the different ways you could use your voice? Is it just a gift?

Tatiana: “It’s not a gift. Maybe it’s a gift inside your head. The ideas that come, the inspiration that I use in the right stream. I get my inspiration and I use it as a tool so I know how to use it, but it took me a really long time to, first of all, to discover that I can do this right. And second of all, that I master it, I train my voice and then I master it. And right now I’m still learning and I’m still discovering what else I can do. It’s never ending schooling for me! (laughs)”

BraveWords: What are some of your personal favorite tracks from Macro?

Tatiana: “I really love, ‘Noah’. I rewrote the Bible in this song and it gives me chills, like goosebumps, because I can imagine the ark and the storm and everything in the song. If I had a lot of money, I would film a music video right in the ocean with a huge ark and storm! The second one, I love ‘Beat Of Consciousness”. By the way, a music video for it is coming up in the beginning of November. I really like ‘Pausing Death’, it was based a book, which I read not a long time ago, maybe a year ago.”

BraveWords: What book was it?

BraveWords: How’s the metal scene in Ukraine? How did you guys come out of this when the most well-known bands play black metal, but here’s Jinjer and you’re totally different. What is the experience over there?

Tatiana: “First of all, metal is not popular at all in Ukraine, but there are a lot of outstanding musicians, like really great musicians in Ukraine. I feel really bad that they don’t do much to cross borders, you know, and to spread their music around the world. They don’t enough.”

Tatiana: “They work hard doing other things. Like they have actual jobs. They don’t believe that you can raise money, earn money with only music. So the reason why we got so far is because we started when we were teenagers and when were able to be supporting by our parents. So the key to success is to start as early as possible (laughs). And you have to believe in it. And despite of anything that your parents for example, say that ‘you cannot do this, like you won’t be rich or whatever. You won’t earn enough money to live on your own. Find a good job, find a real job. Music is not a job for you.’ That’s what I’ve been told, but I was silently doing my thing. It’s crazy, but I had this this knowledge that I would be a musician and maybe even successful musician. It’s kind of crazy, but there was something in my mind.”

BraveWords: So what made Jinjer play this groovy style of metal? What led to you guys sounding the way you do?

Tatiana: “I’m not sure about the other guys, but when I was 12; or I don’t know, 2000, 1999, and I wanted to sing funk rock. I was a big fan of The Offspring. I’m still a big fan of them. I started listening to rock music from Russia when I was 9 and then I switched to grunge and started listening to Nirvana of course. And then it was alternative metal or rock and then switched to nu-metal and rapcore and then, you know, and oh I forgot the name of the genre (laughs). Oh, metalcore! I mean the year this thing is popular, I am listening to it! I followed this trail when I was younger and yeah, then it was groove metal. We just combine everything! (laughs)”