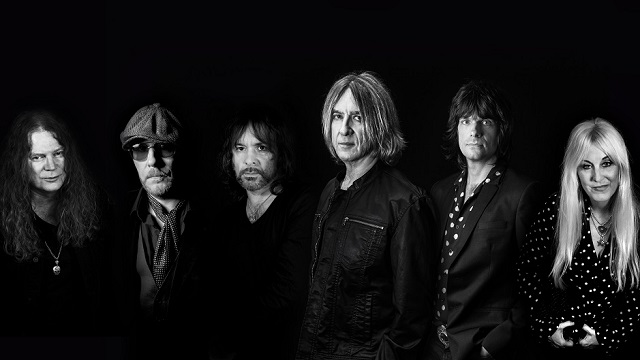 It’s no secret that Def Leppard boss Joe Elliott is a huge ‘70s rock expert, in particularly loving the early UK glam scene of sort of ’71 to ’75. In that spirit, he’s had his radio show as well as a Mott the Hoople tribute band called Down ‘n’ Outz, called to duty to support on that band’s short reunion. Two albums of Mott covers followed, and now we’ve got This Is How We Roll, which finds the band writing brand new (old) originals in the spirit of… well, Mott the Hoople—because this certainly doesn’t sound like Sweet, Mud, Slade, T. Rex, Suzi Quatro, Roxy Music or David Bowie.

Asked about the hows and the whys, Joe is all too happy to explain fully. “Well, the motivation behind it is purely that we got into a kind of part-time momentum. Which is a weird kind of oxymoron, because the band’s been dormant for five years. But in our minds, having done the two albums—which even then we weren’t really expecting to have done one, but we ended up doing two—we discussed the third album. And in the very, very early stages we were sitting around having a few pints and saying, ‘Oh, you know, what are we’re going to do next? I think we’ve kind of run this dry with the Mott stuff.’ So we discussed doing a bunch of different covers, and we didn’t really get far along. And then everybody agreed on ‘White Punks On Dope’ as that would be just the awesomest thing we could do in the world. So that was always in the back of our minds.”

Turns out that epic classic from The Tubes’ 1976 debut would indeed make the record, but that it would be the only song on the album not written by Joe and the guys, the guys, of course being three London Quireboys (Paul Guerin, Guy Griffin and Keith Weir), plus Phil Martini from the Wayward Sons on drums and one gal, Share Ross, Vixen, on bass. “But over the last four or five years,” continues Elliott, “I’ve been sat down at the piano writing songs and I’m realizing that they just don’t fit the general idea of a Def Leppard song, a lot of these things that I was writing. And then it just hit me. I went, well, why can’t we write the next Down ‘n’ Outz album? I had that in mind and I told the guys, ‘Look, I’ve come up with a few ideas and I think this is gonna work with you all.’ And they were totally on board with it. So I just kept ploughing away but I could only plough away in dribs and drabs, because we’ve all got very, very busy motherships. I mean forget mine, which you can imagine for the last four to five years has been insane. The Quireboys are really busy. Phil Martini has got a new album coming out next month and Share is working a lot as well. So it’s really hard to tie everybody down at the one place at the one time. And we haven’t really been able to do it since 2014.”

“So what we did is, once I’d got these demos done and played them to everybody and got the thumbs up, the, ‘Go ahead, yeah this is great, I’m in,’ we started doing it piecemeal. That’s the only way we could do it. Doing it that way gave us a fantastic perspective on the songs because you’re living with them and then you can go, ‘You know that bit we did? We should change that around, blah blah blah.’ A lot of the time you do that once it’s in the shop, you know what I mean? Because you’re always rushed. We didn’t have a deadline. We didn’t have a record label. We just had a dream, if you like.”

“And as I was sitting writing these songs, obviously I was gonna try and have it follow on from the last two albums to a point. In other words, it was going to be piano-based rock ‘n’ roll, but I didn’t want to just rip off Mott songs and make it sound like some kind of pastiche. So I just wrote songs that came naturally to me.”

Getting specific, Joe says that, “For inspiration, it’s partly Leon Russell, partly Elton John, Mott, Bowie, Queen, even Sparks, Roxy Music. There’s some slightly eccentric stuff like ‘Creatures.’ There’s some pretty okay down-home stuff like ‘Last Man Standing’ which is pretty hardcore. There’s the Bowie tribute with ‘Goodnight Mr. Jones,’ but then we’ve got the rockers with things like ‘White Punks’ and the title track and ‘Boys Don’t Cry.’ So it’s a mixture of everything that a great rock band was. If we are doing the comparison with Mott, you’ve got the kind of slow ballady things, like when they would do things like ‘I Wish I Was Your Mother’ or ‘The Ballad of Mott.’ But the title track is a kind of tip of the hat to like Humble Pie, or Brain Capers period Mott.”

There’s definitely lots of piano, sort of in a Bruce Springsteen way too. And it’s pretty cool to think it’s Joe doing this, opening the door to something entirely different from Def Leppard for himself, for his creativity.

“You know, anybody that sits and writes a song on a piano has probably heard Elton John, Billy Joel or anybody that writes songs, you know, Freddie Mercury or Brian Ferry or whatever. So that’s where the inspiration came from. It’s to go back in time to the songs that influenced me before I joined Def Leppard, songs that turned me into a music fan. I’ve kind of shown their head on this particular thing. Like I’ve been saying over the last few days, ‘If you hear anything on this record that sounds like it’s from after 1975, I’d be very, very disappointed’ (laughs).”

Contrasting further this situation with Def Leppard, Joe says, “You don’t need to be in two bands that sound identical—there’s no point. So this had to come from a ‘me’ perspective. So there wasn’t the cooperative society that Def Leppard is. I sat down to write these songs. I didn’t even have the Down ‘n’ Outz in mind or Def Leppard or anybody. I was just writing songs that I liked and they had structure and they were just another part of my head that was developing my rudimentary piano playing, which was improving somewhat, and I was managing to coax out some kind of pretty cool tunes. And then when I had seven or eight of them, I presented it to the Down ‘n’ Outz and they were all like, ‘This is the logical next record for us. I love it. We’re in.’”

This process made the lyrics fairly introspective, somewhat autobiographical.

“Lyrically, for sure, yeah,” agrees Joe. “I mean, obviously you tailor certain things to certain situations. You’re not going to write a lyric like ‘Let’s Get Rocked’ and put it over the music of ‘Last Man Standing.’ You know, it’s… Def Leppard never did that. Nobody does that. If you’ve got a piece of music that sounds moody, then you’re gonna put moody lyrics on it. If you’ve got a jolly piece of music, you’re going to put jolly lyrics on it, you know?”

“But yeah, from that point of view, it certainly is a solo record, if you like, but it was tailored to suit a different band. So I was always mindful of everybody else’s contributions to it, but more from a playing point of view. But with songs like ‘Walking To Babylon’ and ‘Let It Shine,’ you read into the lyrics and it’s like, ‘That’s about Joe leaving home.’ And yes, it is. You know, it’s me looking back at the age of 20 when I decided to get into a car and drive down the M1 and move to London, and just walk clear out of Sheffield. And that’s why there’s lines like, you know, ‘Look over your shoulder, wave bye bye.’ So yes, I was using lifetimes of experiences and cramming them into like eight or nine songs (laughs).” “And I wanted it to have a float,” says Joe in closing. “I took every experience I’ve ever had as a music fan and tried to apply them to today. So that’s why you get crazy things like ‘Music Box,’ which started off as the acoustic version that you hear at the end, and built up by me saying to Ronan, the producer, ‘I want to put a recorder on this.’ I got my old school recorder out, put that down. Again, you’re not through a process of like, ‘What are you doing?’ ‘Cause it’s all you. And the rest of the guys were like, ‘Whatever you want’ you know?’ And then we said, ‘We need the fairground organ.’ And then we started putting all this mad shit on there. And I turned around to Ronan and I said, ‘You know what this needs to sound like? It needs to sound like you just woke up, you just opened your bedroom curtains and you look down into your garden and there’s a fucking clown looking up at you.’ That’s what I said and that’s what we did (laughs).”