Call him the only original member, having founded Judas Priest with K.K. Downing, who left the band in 2011. Call his thunderous role the backbone of the band, content headbanging in the shadows beside walls of amp stacks at every show since the early ‘70s. As the old saying goes, “speak softly and carry a big stick, you will go far.” And far, and far… 50 years far and with no signs of slowing down, which Judas Priest’s latest shining piece of British steel will attest. Firepower just adds to the unmatched catalog, 18 albums in, dating back to 1974’s debut, Rocka Rolla. Clearly, nobody in heavy metal can match that output or consistency, weathering the storm of disco and punk in the ‘70s and more importantly, the crushing wave of the grunge movement that stalled and/or ceased many a rocker. And Judas Priest released one of the greatest albums of their career, Painkiller, exactly one year before Nirvana released Nevermind in 1992. The point is, there have never been any looking-back moments. Judas Priest just continued to forge ahead, stoking new fires and drawing generations of people into their leather and studs-cladded fold.

During the conversation below, the stealth bassist talks about keeping entertained on the road, the fact that he his is now the sole original member still standing and updates on Glenn Tipton’s health. And the (freewheel) burning question; has he read K.K. Downing’s book? So fall on your knees and repent if you please!

BraveWords: Commencing on a side-note, do you ever tire of talking to the press?

Hill: “No, not at all. No, no, no, no. It’s a very, very important component in all of this. In order for everyone to get their point of view across. I never tire talking to the press whatsoever. Otherwise, no other media covers it. If there wasn’t any metal press, we wouldn't get any press at all!

BraveWords: The power of Firepower! This album has a lot of legs and so does the tour! Where do you guys find the energy to keep putting it back on the road?

BraveWords: Well, most people call a home a roof over their head, but when it comes to Judas priest, the road is your home.

Hill: “It has been for a long time. Yeah. Back in the ‘80s we were hardly at home and when we weren’t touring, we'd be in the studio somewhere. I mean you spend a hell of a lot of time away from home. And there is damage sometimes. Of course you have a great deal of gratitude from your fans, and they want to see you and you want to go out and play for them. Without them, we wouldn't be anything, but it does get intense.

BraveWords: How do you personally fill your day and stay busy. How does Ian Hill like to spend his downtime when he's not on stage?

Hill: “Well, if you aren’t playing then you are travelling. But I love travelling and we’ve been very fortunate. It’s all part of the experience. It’s not just about the music. There are places to visit and people to meet. If I do get any downtime, I'll go out and try and experience the local area, wherever we are; if there are any sites to see or museums to visit. And I’m quite keen on trying the local cuisine. There ends up being a lot to do.

BraveWords: To be frank, you can tell the difference between a person who has travelled and one that hasn’t. It just opens up your mind.

Hill: “That's very true. It broadens your horizons as my teacher used to say.”

BraveWords: There must be a certain amount of pride knowing that you and Rob (Halford) are the originals and still hanging in there. Actually you're more of an original because you didn't leave.

Hill: “Yeah (and laughs). At least Rob came back home. He needed to get his solo career out of his system, but it was probably always expected that we’d get back together with Rob and we are so pleased that we did.” 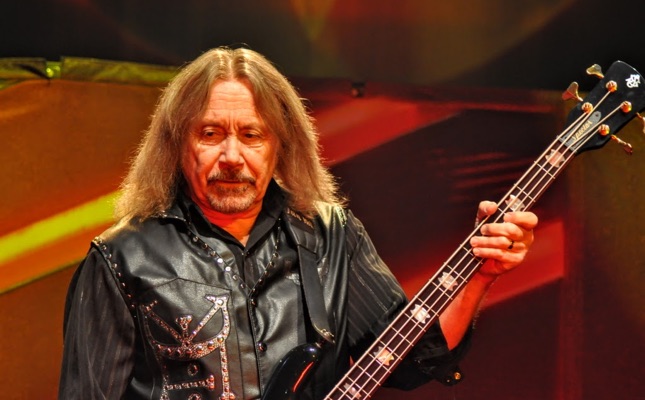 BraveWords: What did you think when Rob came out with Resurrection?

Hill: “Well, it sort of evolved into that. The important thing is we found a replacement for Rob anyway (Tim “Ripper” Owens), and we kept the band going for the seven or eight years that Rob was away. Like I say, it took a while but it was something that we expected to happen eventually, him coming back to the band.”

BraveWords: I clearly remember the Operation: Rock And Roll show where the whole bike incident happened. So that brings back, maybe not the fondest of memories, but a crucial moment in Judas Priest history.

Hill: “Well it was, and we all laugh at it now, but at the time it was pretty serious. We didn't know if Rob had killed himself or what! But when you look back, it was just one of those things that happened. We were coming out of the dressing room and it was summertime, in full daylight in an out-door venue, and somebody shouted “lights!” as a laugh. And of course that was the signal to start the show. Rob was on stage already, I think Glenn, Ken and myself were still in the dressing room when that happened. And the stage opened up and Rob came through on the bike. And by the time they found out that we weren't there ready to go, I said, “well, let's start again.” Rob was already travelling down the ramp, full speed, and the door came down on the bridge of his nose. More power to Rob, he completed the show after falling off a bike. It could have been a hell of a lot worse if he had gone off the front of the stage for instance. Ten minutes later he was up, back on stage and had sprung back to life.”

BraveWords: It was a frustrating time just to even be in a heavy metal band during that time. Operation: Rock And Roll was struggling with ticket sales and arguably one of your greatest albums (Painkiller) was overshadowed by the grunge movement and Kurt Cobain was starting to take over the world.

Hill: “Yeah, they were changing times weren’t they? It's something that traditional metal has always done is to survive. So many musical styles have come in and out of fashion in the last 50 years that we've been around. It's unbelievable. And, it's something that will always carry on and nothing is going to replace it.”

BraveWords: 50 years in an incredible feat and no matter what the fad was of the day, your catalog has weathered any storm. And the fact that you guys are doing this in your late sixties and still putting out very well respected new material. What is the key to the fountain of youth making Judas Priest such an anomaly.

Hill: “It's a quest for something new and something better. With each album and each tour, we always try to take a step forward. New techniques, new gizmos, and fresh ideas. If it works - great, if it doesn’t - it gets discarded. The secret is to keep yourself relevant, keep yourself fresh. So it doesn't really matter how old the band members are, the music itself is fresh and new. I think that is the secret behind longevity more than anything else. That and the fact that we are all friends, we've known each other for a long time and know each other's idiosyncrasies and personality quirks. We can put up with each other and like I say, it's the quest for perfection I suppose. And you have to keep on striving for it.”

BraveWords: You’ve done a bit of tweaking to the set list including some rarely heard classics like “Steeler”, “All Guns Blazing” and "(Take These) Chains”. How do those conversations go when you're building something fresh for the audience?

Hill: “It's funny cause people suggest songs all the time. It’s our third time round in the States and Canada, so we've got to shake the set up. We don't want anything getting stale. There was about 11 of them that we hadn’t done in ages. Before we hit the stage, we see which ones fit and get a good flow. It's exciting times.”

BraveWords: Most bands have a problem putting together a setlist because they don't have the material. You guys have the opposite problem. As well, you are supporting a fantastic new album.

Hill: “Especially when you have a new record out, then you have to drop somebody’s favourite. We'd love to go out and play the whole of Firepower, but obviously you can't do that without dropping some of the fan favorites.”

BraveWords: Was Glenn Tipton in rehearsals with you?

Hill: “It's sort of day to day basis really. Whether he'll get out on this leg, I'm not sure. That’s the nature of Parkinson's disease, you can't really plan anything because you never know if you're going to have a good day or bad day. But if he's feeling well enough, he’ll definitely come out. I don't want anybody going out and buying a ticket on the strength of that. I need to stress that because I can't guarantee it. But if he can manage it, he'll do it. Glenn is a street fighter and if anybody can can get over this disease, it will be him. At the moment he’s struggling a little bit.” 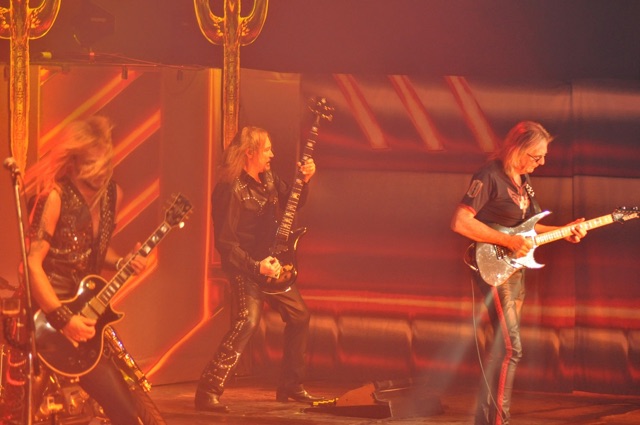 BraveWords: Well that's sad to hear. The entire metal world is thinking of him. Please pass our regards to him.

Hill: “I will do that. He would appreciate that.”

BraveWords: I recently finished reading K.K. Downing's biography. Curious if you have read it?

BraveWords: Do you think the door's still open to have him come back for one final good-bye?

Hill: “We’ll see. It’s something for the future, but right now we’ve got a lot on our hands. But you know, you never say never. You never know.”

BraveWords: This tour just shows the power and longevity of fine British heavy metal. What's your relationship with Uriah Heep?

Hill: “We've bumped into Uriah Heep many times over there over the years. They're great guys and we've got a lot of respect for them musically as well. They've been around for as long as we have. It’s a great deal, two classic British bands together. It's a great ticket.” 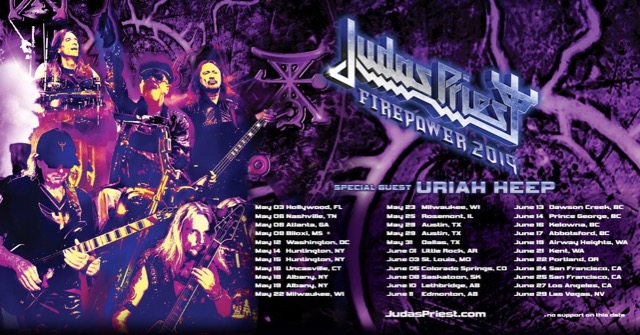