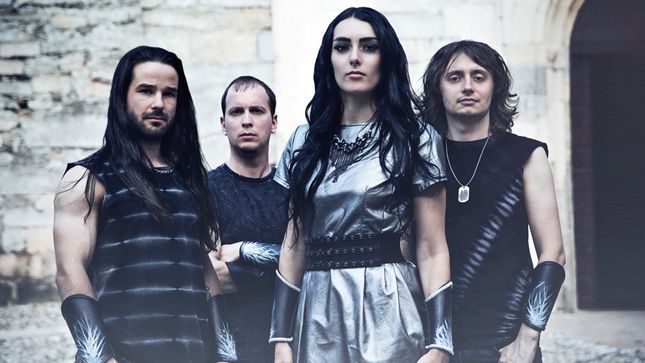 All it takes is one chance. Italian power metal act Kalidia have taken the reins after the release of their second album The Frozen Throne (and first through Inner Wound Recordings) looking to set sail with Gothic / power metal melded with the speediest sounds of Helloween, HammerFall, and the grandeur of Epica and Nightwish. It all comes together with the vocals of Nicoletta Rosellini. The goddess with the golden pipes caught up with BraveWords to talk about The Frozen Throne, their beginnings as a cover band, and upcoming live events.

BraveWords: Congratulations on the release of the new album! How did the partnership with Inner Wound begin?

Nicoletta: “Thank you for this interview! We got in touch with Inner Wound after we received the album mastered; we sent out some promo stuff and our label was the one who convinced us. We felt they believe in this record as much as we are. Our collaboration is going great, they are doing an amazing job, helping us to reach a way wider audience. We couldn’t be happier!”

BraveWords: I see the band actually began as a cover act called Neverwing; what made the band switch to the name Kalidia and where did the impetus come to write your own, original material?

Nicoletta: “Neverwing was a cover band formed that I joined the last 6 months of its existence. Federico was playing guitar there and there also were our former drummer and keyboardplayer. We wanted to completely change our musical direction and started an original band and, consequently, we wanted an original name. Kalidia was perfect: a fantasy name formed by the union of goddess Kalì and the ancient region of Lidia. It was our very first experience dealing with our own music, but we wanted to try to express ourselves and write our songs.”

Nicoletta: “The title, ‘The Frozen Throne’, is inspired by the videogames of Warcraft, but this is not a concept album. We thought the title track was a strong song and we liked the snowy and icy theme, we imagined it could work nicely also on live shows visuals (banners, backdrop, clothing). The cover art was done by Stan W. Decker and he did an awesome job!”

BraveWords: What are the band’s biggest influences? I hear elements of Stratovarius, Helloween, Nightwish, and Epica in your music.

Nicoletta: “Those bands you mentioned are for sure among our influences. We have our roots in classic power metal, we started doing covers of Strato, HammerFall, Gamma Ray and Masterplan. But there are many different influences among us, going from prog to hard rock.”

BraveWords: The vocals are outstanding on this album, how long have you been singing and was being a metal singer is what you always wanted to be?

Nicoletta: “Thank you! I joined my first rock band at 15, however my formal vocal training started recently, right after we recorded our debut album; I think the difference can be easily heard! Well, when I started to sing in bands I was already into rock/metal music so, yes, I’ve always wanted to be a rock/metal singer.”

BraveWords: There are a lot of power metal acts out there, but what makes Kalidia stand out from the rest of the pack?

Nicoletta: “I think melodies and strong choruses are something that keep the listener interested in the music and we worked well on that side. I also think hard work and a little bit of luck helps and again we got both!”

BraveWords: Describe making the video for “Circe’s Spell”. That video looked like it was fun!

Nicoletta: “It was indeed funny but also stressful! Managing around 20 between dancers, actors, musicians, video maker, location owners, makeup artist was difficult, we at the end of the day it was all worthy. We had one of the best tribal fusion dancers in the world, Valenteena Ianni, and her Karma Experiment group, a couple of medieval/Vikings reenactment groups who also brought some of the scenario stuff and a beautiful villa located in our hometown…and of course one of the coolest video makers, Tommy Antonini. Everything turned out even better of what we were expecting!”

BraveWords: Any particular tracks that stand out to you? I love the bounce of “Black Sails”.

Nicoletta: “Ahah, it’s really difficult for me to pick songs from this album… but if I have to choose, my top 4 are ‘Frozen Throne’, ‘Circe’s Spell’, ‘To The Darkness I Belong’ and ‘Go Beyond’. ‘Black Sails’ is one-of-a-kind song: we wanted to do a funny pirate song that you can recognize from the very first notes; it also turned out to be a great song to put on a concert setlist!”

BraveWords: The album has a strong, full sound; with each instrument receiving ample attention. How great was it having Lars Rettkowitz to work on The Frozen Throne?

Nicoletta: “It was amazing. Lars is an incredible musician, producer and arranger, we learned a lot from him and his job on the key arrangements are pure gold (even if some of them are our former keyboard player ideas). He also taught me a lot about vocal lines arrangements, lyrics revision and I’ve learned more about my vocal range. He pushed all of us beyond our limits and we couldn’t be happier of what we achieved together.”

BraveWords: Any touring plans to support the record?

Nicoletta: “We already did some warm-up shows here in Italy and more will follow in 2019, also outside our country. I highly suggest keeping an eye on our site/social pages, soon we’ll unveil the first confirmed shows!”