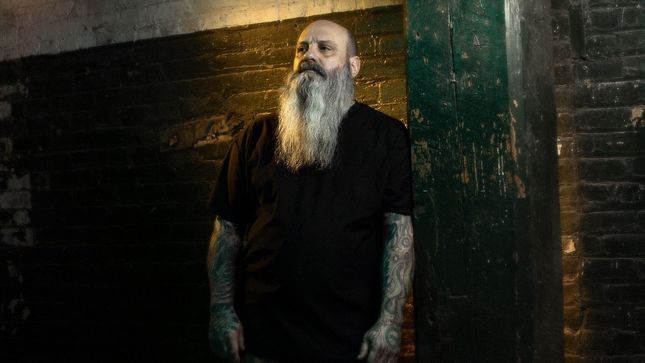 “I was a little… I won’t say nervous. I just went into this thing thinking, ‘I’m just going to do what I want to do.’ That’s why it’s not called Crowbar, or Down or Kingdom Of Sorrow. It’s Kirk Windstein; this is me. It’s another part of my writing personality,” says the New Orleans native, speaking about Dream In Motion, his debut solo album, available January 24th via eOne.

“Honestly, I listen to so many different styles of music,” continues Kirk. “In fact, when I listen to heavy music, I listen to Motörhead, Judas Priest, Saxon, Twisted Sister. I’m not much on any of the new bands. I am old (54), but I guess I’m old school as well. For me, doing this, I listen to so much ‘70s soft rock, that this is heavily influenced by all of that. There’s a few Beatles things here and there… it’s something I’ve been wanting to do for a long time; I felt I had to do it, and this was the time. I actually started it in June of 2017 and finished it up in July of 2019. No pressure – a song every couple of months. That was it.”

Abiding by the “low and slow” ideology throughout three decades as a sludge metal pioneer, this methodical pace didn’t bother Windstein in the slightest. “Well, when you’re finishing up a song and flying to Europe the next day to do a tour… if I didn’t have anything else going on, yeah, it definitely would have tried my patience and I would have been a little stressed out. But from the get-go it was, if this thing takes a month or five years, it’s going to get done eventually. Let’s just take our time; there was no deadline. When I had absolutely nothing to fucking do – which is not often at all – I’d go into the studio with a song idea and do it.”

Looking at the cover art for Dream In Motion, it depicts two birds in Kirk’s beard. One looks like a crow, which could be a reference to Down (“Stone The Crow”) and the other appears to be a dove, the bird of peace. “Yeah. Jamey Jasta (Hatebreed, Kingdom Of Sorrow) actually came up with the idea and made a – which I will never make public – a sketch of an album cover idea. He’s not the best artist, but I got what he was saying. We had Eliran Kantor, who did (Crowbar’s) The Serpent Only Lies; he’s done tons of great album art for a lot of bands (Testament, Iced Earth, Sodom). He’s awesome. He lives in Berlin, so whenever we play Berlin he comes out. He’s a great guy. Jamey said, ‘Let me hit up Eliran and see what he comes up with.’ At first, I was like, I don’t know. Then I looked at it a little more, and I thought it was fucking killer! So, kudos to Jamey, and of course Eliran. It’s kind of like you explained. I don’t really know the exact meaning behind it, but it’s better that Eliran did a painting of it, than a picture of me. No one wants to see a photo of me, Jesus. He made me look better than I look, so I’ll take it.” And the Fleur-de-lis on the right side, which is synonymous with both New Orleans and Crowbar. “Yeah, absolutely man.”

Dream In Motion really is a solo album. Kirk is singing, playing guitar and bass; the only thing he’s not doing is playing drums. The man behind the kit is Windstein’s longtime producing partner and collaborator Duane Simoneaux, who’s worked on several Crowbar albums including: The Serpent Only Lies, Symmetry In Black, and Sever The Wicked Hand. It seems that when the majority of musicians do a solo album, they call on their friends to make special guest appearances, turning it into an all-star ensemble. But Dream In Motion is truly Kirk Windstein solo. “Yes, it is. My daughter was there when I sang ‘Aqualung’. I had her that weekend; she lives like an hour and a half from me, so I usually have lunch with her, take her shopping, just hang out. She’s a junior in high school now; she’s not a little kid anymore by any means. But she came by the studio for ‘Aqualung’ vocals. She had no idea how the process worked… she got to experience it, which was a great thing. But, back to the original thing I was saying, other than my daughter for one afternoon, it was only me and Duane in the studio the whole time. No other musicians, no other people. I’d have friends stop by for 15, 20 minutes here and there while I was tracking guitars or something. No one was involved – me and Duane – that’s it.”

The aforementioned “Aqualung” is the only cover song on Dream In Motion. Originally done by Jethro Tull, “Aqualung” is the title track to their fourth studio album, released in 1971. Kirk explains why he chose to end his solo album with this iconic number. “Well, believe it or not, Crowbar used to do a very short version of ‘Aqualung’. For me, I love the Aqualung album. I’ve had it since I was a young lad. I didn’t get it in ’71, I probably got it in about ’76 or ’77. But that song, ‘Aqualung’, was actually a pretty popular FM radio hit in The States for classic rock and album-oriented-rock, so I would hear it all the time. I’ve always been a big Jethro Tull fan, but it’s always been a song that, wow, this is weird – for lack of a better term. Believe me, I asked Duane to put on the original because on this solo record, I tune to D standard, instead of E standard. And Crowbar tunes to B standard, and we drop A on a few tracks. So honestly, Duane put it on, and I said, ‘I’m just going to transcribe it and pick it out in a natural key.’ So, what you hear is – actually at the end of the song, some of the piano is from the original. There’s some crazy Pro Tools where you can do that now. I literally did the same tempo, same key, same everything. I picked it out note for note; especially with the solo. I want (Jethro Tull guitarist) Martin Barre to hear it and laugh. It took me two and a half, three hours. I’d pick out a few notes at a time – alright, let me lay this down. We picked it out riff by riff by riff; that’s a long, long guitar solo. If it hadn’t come out, at least in my opinion – and Duane’s as well – to be what we consider great, I wouldn’t have included it on the record. I would have just wrote another original tune and done it. But we spent a lot of time on that track, and I think the effort really paid off. I think it’s a great cover, a great tribute to an amazing band, and an iconic, legendary song.”

Delving into Kirk’s original lyrics on Dream In Motion, the listener doesn’t know specifically what is being sung about, but the words are easy to identify with; “Toxic” is a perfect example. It contains the line, ‘Your presence is toxic’, which is a situation everybody has unfortunately experienced at least once. “Well, to be honest, my wife, Robin, wrote the lyrics to ‘Toxic’. She’s written a lot for me in the last… it’s not that I’m running out of ideas or anything; she’s a great lyricist! That song in particular is about a certain person – who I can never reveal. Me, normally I don’t write stories. I write thoughts, feelings, emotions; and I write in metaphor. But ‘Toxic’ is Robin’s thing.”

“Dream In Motion – that’s the story of my life. Have you seen the video? I’ve got to give kudos and a big shout out to my good old friend Al Hodge, because he had all the photos and stuff from when I was young. He actually came to Chicago with us to record Obedience Thru Suffering (Crowbar’s first album, released in 1991). He did it all on the camera and video. He really helped out with that. But the whole thing… the story behind Dream In Motion is this. I went to see Saxon and Armored Saint in 1986 at The Texas Club in Baton Rouge, Louisiana. I’m 99.9% sure that it was not Saxon’s bus, but Armored Saint’s bus. Those old Eagle buses in the ’80s, you could put a phrase up top. Well, Armored Saint had ‘A Dream In Motion’. I’m sitting there looking at it, wearing my Armored Saint shirt of course, and they invited me and my bass player at the time, Danny Theriot, on the bus. So, we gave them a demo tape of (our band) Victorian Blitz – some original songs and whatnot. I told Robin my idea; I want this to be about my life. When I saw ‘A Dream In Motion’ on that bus, that’s perfect! Ironically, I have Saxon and Armored Saint tattoos. I’ve definitely got to say, both bands played an extremely big part in my life. When I saw that phrase, that’s it! 33 years later, here it is.”