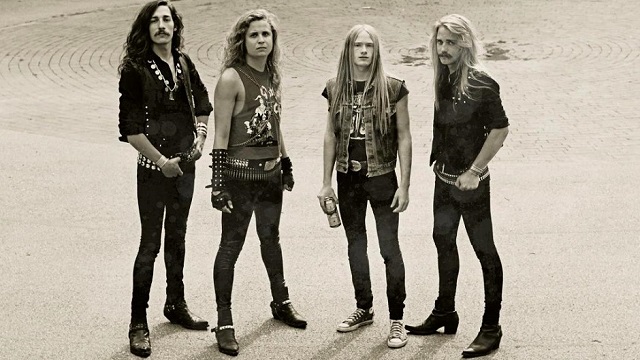 Decades of listening to music, attending live shows and reviewing, but the memorable moments are the unexpected new discoveries. Latest case in point, the heretofore unknown Lethal Steel, another high quality, traditional minded group of Swedes. The debut, Legion Of The Night, was just released on High Roller Records, an intriguing mix of countrymen (sadly now defunct) In Solitude and a heavier Enforcer. Strangely enough, Olof Wikstrand (Enforcer guitar/vocals) helped Lethal Steel record and mix the album. "He also got us to sharpen up and really do our best during the recordings," claims Steel singer Viktor Gustafsson.

While Sweden has recently undergone a resurgence of old school (some say "retro") sounding traditional/NWOBHM inspired bands, and then there was an occult phase, these guys walk the line between the two, although the singer is quick to point out the delay in getting the disc from studio to the street played no role in the seeming dichotomy. "Actually, that’s nothing I’ve given much thought," he contends. "We are trying to produce old-school heavy metal, without the influences a lot of the newer bands have. I think that makes us quiet unique in the metal community nowadays. In Solitude, and bands like that, are nothing we ever listened to."

In the press bio, guitarist Johan Frick claims the biggest influence on their sound was Heavy Load. While the venerable ‘80s Swedes' sound isn't readily evident, Gustafsson also mentions the band, amongst other cult favorites. "Of course Heavy Load is a huge influence, but I wouldn’t say that they have inspired us any more than other Swedish bands. To be honest. I think the biggest influences for us have been Gotham City and Jonah Quizz." 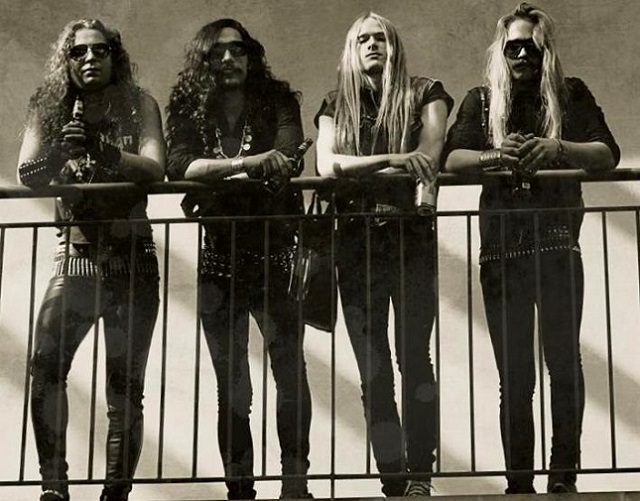 Speaking of reference points, to North American ears, there's an occasional hint of Paul Stanley (Kiss) in Gustafsson's voice. "Ha ha! Actually I have never heard that before. I don’t really hear it, but I think I’m gonna take it as a compliment. My biggest inspiration, for the vocals, would be Johan Längquist (Jonah Quizz), Christer Göransson (Mindless Sinner), with a little bit of (Swedish tenor) Jussi Björling."

While “Into the Void Of Lucifer” was erroneously reported to be a relatively new song, the singer sets the record straight, as to where the band is headed, musically. "The newest songs on the album are 'Demon From The Past' and 'Sirius', but I don’t think we are heading for a certain sound. I think we need to be varied, regarding the style we play, but within certain limits. We’ll never fold down for the influences of the more modern bands and that is what makes us special in the metal community. We are already working on some new material, but I think we need to be focused on this release and the reaction, once it’s released."

To that end, the niche German label seems a great fit for Lethal Steel. "I think that High Roller Records is it, if you're a new band playing this type of metal," agrees Gustafsson. "It’s a bit like having a quality-stamp on the album cover. They’re not an extremely big label, but that’s not what a heavy metal band needs anyway." 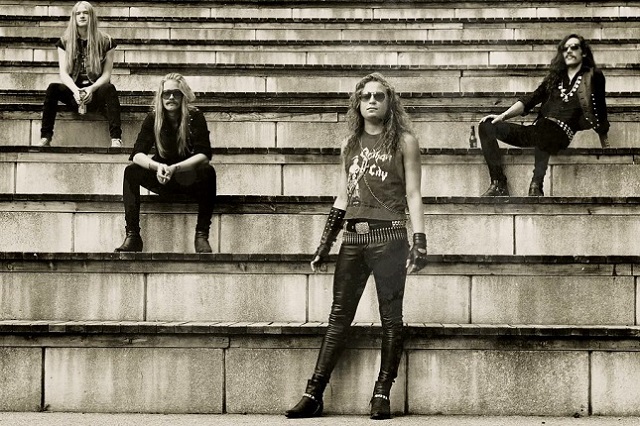 One of the advantages to a label is securing support/promotion for live dates, and while Lethal Steel are still a new entity, the wheels are already turning, for upcoming concerts. “We have played quiet a lot of shows here in Sweden," begins the singer, "not recently though, due to the recording of the album. I think Muskelrock (annual traditional minded, open air festival) was the biggest. At least the most important for us. It was not long after that we joined forces with High Roller. We have a couple of gigs scheduled and the one that sticks out is the Hell Over Hammaburg festival in Hamburg, but we will reveal more gigs in the near future."

A future, that while gazing one eye to the past, looks very bright!