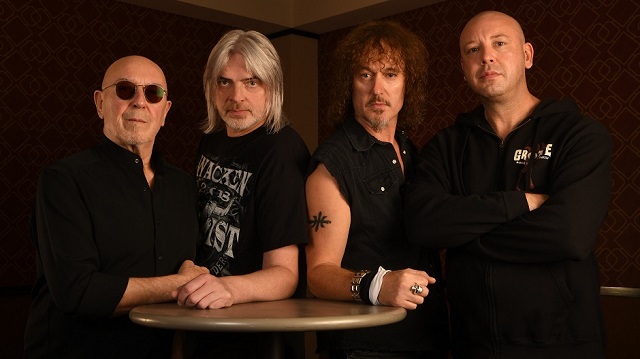 What I found interesting in speaking with bass thumper Pete Agnew—in December celebrating 50 years with the band—is that his son Chris is a virtuoso bassist, playing in jazz ensembles and punk bands and everything in between. Pete’s now 72. Jimmy Murrison has been in the band for a quarter century, on all of these great recent Nazareth albums. Pete’s other son Lee has been drumming for the band for close to 20 years, plus writing and singing, a fully integrated member of the band for a long time now. Sure, original vocalist Dan McCafferty has had to bow out for health reasons, and there’s an audacious quality to thinking he can be replaced, as talented and versatile as Carl is.

But given that the rest of the band lineup has been the same for near 20 years, and that a replacement for Pete seems possible and poetic… maybe Nazareth, through this point of legitimacy, has a bunch of years and albums left in them yet? Hell, maybe they can go on for 200 years, which is something me an’ the buds debate about Lynyrd Skynyrd and Kiss, both for different reasons from Naz and from each other.

Enough science friction. Back here where men and bands are mortal, Nazareth is bringing you the first record of the Carl Sentance era. Tattooed On My Brain charts a direct continuation of the refreshing and immediate sounds heard on the likes of Rock ‘n’ Roll Telephone, Big Dogz and The Newz, no small credit going to producer Yann Roullier, who has been, as Pete says, “the fifth member of the band” since 2007.

“This is what we wanted,” begins Pete, asked to explain the unexplainable—a Nazareth album without Dan McCaffery. “There were two stipulations: he had to be a great singer and he had to not sound like Dan. We didn’t want a Dan sound-alike. Because we would’ve been crucified if we’d done something like that. And you wouldn’t want to do something like that, you know? When we did all the auditions and stuff, a lot of people wanted to try to do the Dan sound-alike. And yes, a lot of it sounded like Dan, but it’s not what we were looking for. So we tried a couple different things, and that didn’t work.”

“And then a friend of mine said, ‘There’s a guy you want to have a look at,’ and it’s Carl Sentance. So we got him up to try it, and he was quite keen to join if we wanted him. So when he came to do an audition with us, within a couple of verses of the song—we did ‘Silver Dollar Forger’—we said this is the man, this is great. Wonderful singer, and so it worked out. And he’s got a wonderful presence on stage. He’s got a great act, if you like. And I thought, this all works really fabulous. And the only thing left to see was how we got on in the studio. And it was great, because we took some time getting in there. We did almost like three years with Carl live and so we all knew each other very, very well by that time.”

“But as it turned out, he was great with the way we recorded too,” reflects Pete. “When we went in to record, we recorded pretty much the same way as we would record with

Dan. So there wasn’t a lot of difference; it’s just a different guy coming through the speakers. But I’ve got to say, he’s pretty much an incredible first take singer. When the guy goes in to sing, every time he does a take, it sounds like perfect. He’s like, ‘Oh, let’s try that again,’ and I’m thinking, why? (laughs). It sounded great to me. So he’s really easy to record with. But as I say, we’d been with him for three years, so we were used to Carl being the singer in the band, the singer with Nazareth.”

Wisely, the band had fully integrated the seasoned Sentance (Persian Risk, Krokus, Geezer Butler), into the writing process as well.

“Yes, and how we did it is we did Carl’s songs first,” explains Pete. “Because we were still writing the songs. People were working at home and in other rooms, rehearsal rooms in the studio. So we recorded his songs first. That was great, because when you’re recording with Nazareth, if you’re recording our things, well, if you can’t sing your own songs, you’re really up against it. So you’re singing the songs you’re comfortable with because you wrote them. So that was a great way to start recording. And then we moved on to the other songs that other people had written. And he would sing them how they wanted him to: ‘Let’s see how you would sing this one’ type thing. It all just fell into place.” 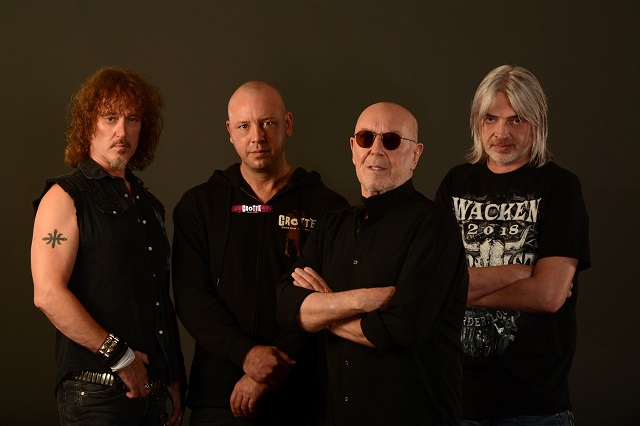 Surprised I’d never asked this in past chats, but I wondered what the young blood in the band brought to the table in terms of influences, specifically Pete’s son Lee.

“Well, that’s the other thing, because he had all the same favourites as me from what he was hearing as a kid. He was a Little Feat fan, and it wasn’t, I don’t know, Abba. He was listening to Little Feat and stuff like that, because he was in the house with me and all his brothers. But then of course, they go into different things, when you start to leave and go to college and stuff. Lee was in a band with Jimmy, at college, and they were into all sorts of different music. At the time when Lee came into the band… see, he’s a great drummer, but he’s a really good songwriter too. And that’s what Lee added to the band. Here, well, ‘The Secret Is Out’ is one of Lee’s songs, and that’s one of the best tracks on the album. And he did like ‘Push’ with Jimmy and he did ‘Crazy Molly,’ so he’s a very, very good songwriter, and he’s a good singer. On stage it’s me and Lee doing the backup vocals. And also he’s been there for 20 years now. And it’s funny, actually, he loved Carl coming in, because he can tell all his friends now, ‘I’m not the new guy anymore.’”

As for the condition of the band’s legendary singer of the previous 46 years, Dan McCafferty, and whether his breathing issues affect him even just walking around, Pete explains, “Well, that’s the problem. See, Dan’s just not walking around. Dan can’t walk around, let alone be in Nazareth. When Dan comes outside, he’s in a wheelchair. I’ll be seeing him tomorrow, because I’ve not had a chance to see him these last few weeks. I was in Canada up until the end of September doing the Canadian tour.”

“Oh yeah, he lives only five minutes from me. I live in one village and he lives in the next village down at the seashore. So I go to see him every now and again. He likes to be brought up to date with what we’re doing and he loves to hear the stories. So I go down to see him. He has good days and he has bad days with the breathing stuff. If he gets the slightest little bug, it’s really bad, for his breath and that. But he can’t sort of go along too far walking without being terribly short of breath.”

“But he’s done a new album as well,” continues Agnew. “See, he can’t travel with our band. I mean, he can’t come up and do a show, but he can still record. Because as you know, when you go in to record, you can record one line at a time. You can record one word at a time if you like. He can sing a verse, a line of a verse, and have a cup of tea, and then sing again. So when we did Tattooed on My Brain in the studio here, it’s a studio we used for Rock ‘n Roll Telephone, and the reason we used it is it’s right close to Dan’s house. When we did Rock ‘n Roll Telephone, he wasn’t getting any better then. It was good to be recording just around the corner. So he could just nip down when he was needed to sing. So he’s making a solo album in there with a guy from Czech Republic, Prague, and he’s recorded that, although I don’t know when it’s going to come out.”

Conversation eventually drifts to a bit of historical—after all Tattooed On My Brain is the band’s 29th album!—with Pete remarking of the career-defining Razamanaz album of 1973, “You’ve got to remember, that record was recorded in nine days. Same with Loud ‘n’ Proud—it was nine days as well. It’s incredible when you think about it. They’re almost like live albums. They’re basically a live album with an overdub (laughs). And when we made Razamanaz, when we did the album, you know what it’s like, Martin… well, it’s like this album now. It’s a feeling that you get. When we did Razamanaz, we went, ‘That’s a hit. That album is going to make people take notice.’ We knew it. You had no doubts about it when you finished it. That you’d done something really good, you know? And it’s exactly how I feel about this one. This one reminds me of the feeling we had after Razamanaz. When we finished this, we were thinking, ‘This is one of the best records we’ve ever made, boys.’ And you just can’t wait for it to come out. We were like that with Razamanaz. We were going, ‘Release it, release it, release it!’ (laughs). And that’s the way we feel about Tattooed on My Brain.”