POWERWOLF - Every Day Is Erection Day 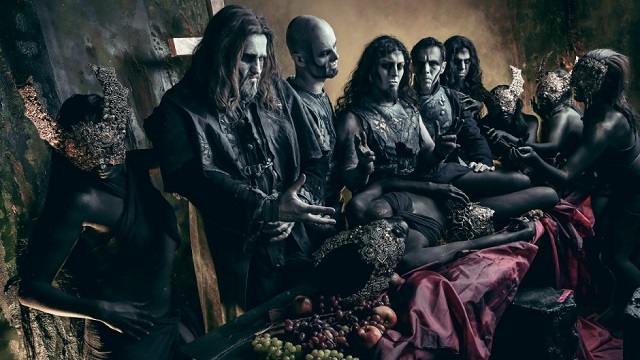 Powerwolf's brand of epic power metal is an acquired taste. Their fans happily / savagely wash it down with kegs of beer while their detractors hate on the band for questionable use of corpse paint and sounding far too upbeat to be considered real metal. Whatever the case, the German bashers continue to enjoy a healthy amount of success that - when the world isn't experiencing a viral pandemic - sees them headlining tours and festival shows around the globe. Best Of The Blessed is their offering for 2020, a compilation of remastered fan favourites, and in some cases re-recorded, along with 14 live cuts that showcase Powerwolf in their element. BraveWords caught up with keyboardist and on-stage hype-man Falk Maria Schlegel - the gentleman in the photo who looks like a zombie banker - to discuss the new record, the band's longevity, and shamelessly proclaim hero worship of a little band called Iron Maiden.

BraveWords: So, why do Best Of The Blessed at this point of Powerwolf's career? Compilation albums are often seen as a Get Out Of Jail Free card to honour label contract obligations.

Schlegel: "We've released seven albums in 15 years, so we discussed it as a band and decided it would be nice to have a Best Of compilation. We play every song on this compilation live so it wasn't hard to decide which songs should be included. And having a Best Of album, there was a question of what could we put on it as an extra for the fans, which is why we decided to record the Sacrament Of Sin tour through Europe. It was important for us to have both of these things on it, and to be honest I think it's a good starting point for people who don't know Powerwolf yet."

BraveWords: Some fans may feel you've committed the ultimate sin by re-recording some of the band's biggest hits.

Schlegel: "The reason for the Best Of is very simple: we found it boring to just put the songs on an album and put a sticker on it saying 'remastered.' It was much more exciting to re-record some of these songs, and I have to say it was cool to perform these songs in the studio after such a long time. We made a couple changes here and there without completely rearranging the songs, and I'm quite sure that a lot of people won't even realize some of those changes. For us it was important because we need the stress (laughs). The only significant change was on 'Kiss Of The Cobra King' but that had been planned for a really long time. In that case we were influenced by the Sacrament Of Sin album (2018), which featured other bands covering Powerwolf songs on the bonus disc (Communio Lupatum). Caliban did 'Kiss Of The Cobra King' and had a totally different approach, which is amazing. That was inspiring."

BraveWords: Where did the idea come from to ask other bands to cover Powerwolf songs for the Sacrament Of Sin bonus disc?

Schlegel: "That idea came up during our European tour with Epica a couple years ago. They played 'Sacred & Wild' during their soundcheck; we heard it and were like 'Oh my God that sounds great!' We asked Epica is they would record it and they agreed, and from there we got the idea to ask Mille (Petrozza) from Kreator, Amaranthe, Battle Beast.... bands we have toured with and are friends with. They all said yes, and it was an honour for us that they all agreed to do it. The big thing is when Chrigel (Glanzmann) from Eluveitie called us and asked if he could change the lyrics, and we told him to feel free because it was their version of the song ('Ira Sancti'). That showed me there's a real heavy metal family all over the world. Unfortunately, Iron Maiden was too busy to take part (laughs), but I think that if they accepted a request to do that everyone would be bothering them about doing the same for them. That would be a dream come true, though, having Iron Maiden cover a Powerwolf song (laughs)." 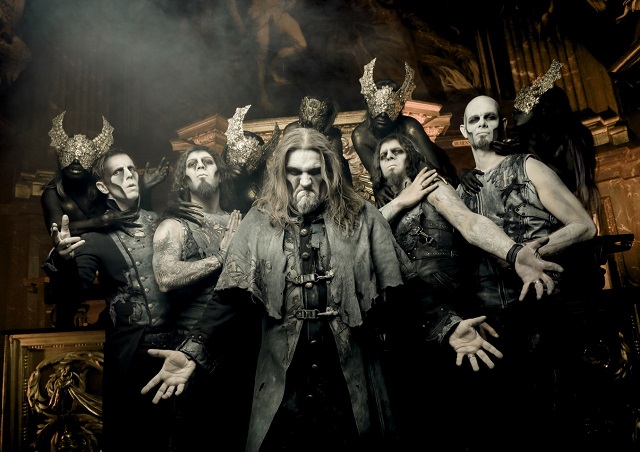 BraveWords: Germany has an untouchable roster of internationally successful metal bands - Helloween, Scorpions, Accept, Destruction to name a few - that are considered pioneers and have inspired thousands upon thousands of metalheads to try and follow in their footsteps. Do you guys realize that you're becoming a part of that national legacy?

Schlegel: "That's a good question. Sometimes yes, sometimes no. We're the same people we have always been. We work hard on songwriting and performing, we have a lot of fun doing it, and sometimes we realize Powerwolf has become something huge for a lot of people. When I speak to the fans and hear them talk about our music, I realize how deeply out music can affect people and that's a good feeling. I'm proud of being able to have a positive effect on people. It's amazing. For example, I'm a huge Iron Maiden fan; Mr. Steve Harris is responsible for making me want to join a band. Since then I've met him several times at festivals, and I realize that, wow, I'm a part of the same family. But, as Powerwolf we always want to improve, to develop. This isn't a case of 'It is what it is and now we have it.' We want to keep moving forward and getting better."

"When we talk about Powerwolf history, we released our first album (Return In Bloodred) in 2005 and got the offer from Gamma Ray to support them on tour. We had really only dreamed about doing a real tour at that point, and then we got that offer. Years later I read an interview with Kai Hansen (guitars), and he mentioned that a lot of bands that had supported Gamma Ray or Helloween went on to get bigger, and he named Powerwolf as one of them. I was a bit proud to read that (laughs)."

BraveWords: Powerwolf's rise to fame seems to mirror Sabaton's, as does your sound. It's as if the two bands have spearheaded this particular brand of epic power metal or whatever you want to call it. Do you hear the Sabaton comparisons very often, or is that just my Old Guard ears playing tricks on me?

Schlegel: "We don't really hear comparisons to them, no. We toured with them in 2011, and their popularity was also growing at that time; it was the perfect combination. My impression is that there is a new generation of metal bands like Powerwolf, Sabaton, Battle Beast, Gloryhammer... and people are waiting for that. I think our music is different from Sabaton's, but the common element is that both bands want to entertain the audience with our specific themes and concepts. We have a theatrical / church concept, they have a tank (laughs), and I'm happy that the people like these sorts of things. At the beginning it was quite strange for people that a power metal band like Powerwolf wore make-up and had a keyboard player that was jumping around and never stayed where he should (laughs). It was a struggle to convince people and we didn't get everyone - some people really hate us (laughs) - but the people that love Powerwolf really do love and support the band. I've never heard someone say Powerwolf is okay; they either say ‘I love that band’ or ‘I hate their fucking keyboard player...' (laughs)." 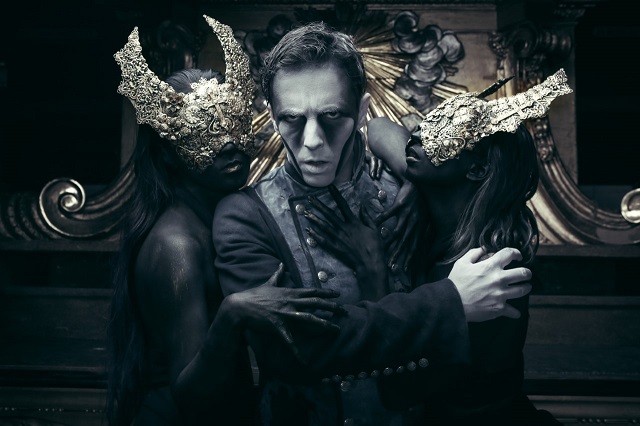 BraveWords: The same has been said about Helloween and Blind Guardian.... people love them or hate them.

Schlegel: "It's important to have that. I think the great thing about heavy metal is you still have your heroes - Iron Maiden, Manowar, Megadeth, Kreator - and then you have a new generation of bands that attract younger fans, and because of these new bands those fans can get turned on to the older ones. Like a young Powerwolf fan reading this interview, for example. This community and scene can get bigger and keep growing rather than dying out."

BraveWords: What inspired Powerwolf's image? I know it developed over time into the current vampiric / Goth / religious backdrop, but there are lines that you risk crossing, whether it's into parody or controversy.

Schlegel: "As you said, it developed over time. When we started we were designing our own stage clothes, the make-up looked terrible (laughs), but from the very beginning every one of us said that we didn't want to go on stage wearing jeans and T-shirts. I like grunge but I don't need to look like it. We wanted to be like Iron Maiden or Judas Priest, so we took those elements of the stage clothes and the make-up and made them a priority with the music. It developed over many years. And the idea to use the religious elements was always in our minds but we didn't use that at the beginning. We started using the choirs and the church organ, we started writing about various aspects of religion, and we realized very quickly that this music isn't just about the music; it's also about behaviour, image and approach. But we use the religious imagery in a good way and an entertaining way, not in a satanic way or in some way that's offensive. And if you see Powerwolf play live that is very obvious. I mean, we have a song called 'Resurrection By Erection'... you have to recognize that we have a sense of humour (laughs)." 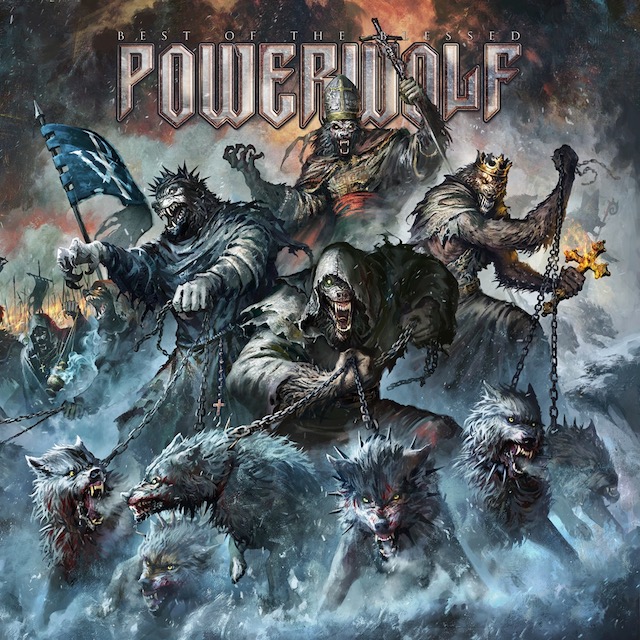 BraveWords: Word has it you guys are working on a new album for 2021.

Schlegel: "The plan was to start with the songwriting this year, after the tour with Amon Amarth in South America. Now we have plenty of time this summer to focus on the writing, and the plan is to go into the studio at the end of the year with Jens Bogren (producer) again. We will release the new album next year, and hopefully we'll be able to tour."

BraveWords: How is Powerwolf holding up with not being able to tour right now? You guys have been road dogs for years, so your livelihoods are clearly invested to being on stage.

Schlegel: "Normally when we're not on tour, we're writing new songs. So in this case we're okay with the current situation. If we're told next year that we can't play festivals or can't play shows with more than a certain number of people, that could be really dangerous for us. But, we're choosing to stay optimistic and creative. I'm sure that if and when we're able to play normal concerts again people will be freaking out and really loving the experience."