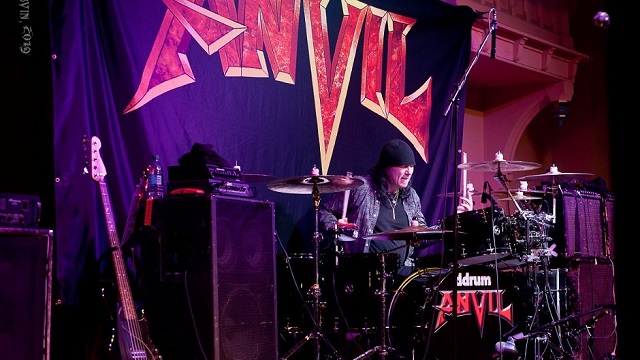 Anvil are relentless, against all odds, the Rocky of all metal bands, whose co-founders have played together since 1973, performed a few weeks back at the popular dive bar  in Phoenix, Joe’s Grotto. Before their much-anticipated performance, Robb Reiner sits in their aged van. Less is more, is the longevity mantra for the legendary Canadian heavy metal band. Reiner is the business-minded band member; the yang to the yin of singer/guitarist Lips (Steve Kudlow) and keeping their expenses manageable is how they are able to keep financially solvent on the road while bringing metal to the masses. The band doesn’t have a business manager, road manager, roadies or any of the customary entourage.

Reiner emphasized that their mission is to bring the band to new places, small venues, in the US where other bands might not go. “We will play anywhere: birthday parties, bowling alleys-it’s what we do. Most people in the US haven’t seen Anvil live and we play for our original fans and our new fans.”

Reiner, now in his 60’s, looked pretty much how he appeared ten years ago in the documentary Anvil! The Story of Anvil, wearing his trademark black beanie and the gold drumsticks necklace that his jeweller father made for him at the age of 14. Rock n’ roll can be a fountain of youth for some and he agrees that he looks “pretty fuckin awesome.”

Keep reading to find out the rock ‘n’ roll realities shared by the somewhat intimidating and unusually candid drummer.

BraveWords: Has being Canadian and not relocating to the United States as many Canadian performers have done, affected your career?

Robb: "It appears that way but it would have been pointless to move to the US, since we travel here so often. This is a tough market-out of sight, out of mind, society. We’ve had to keep pounding for the last ten years. Also, Canada is one of the best countries in the world to live in."

BraveWords: How does all this traveling affect your families? (Rob and Lips are very family oriented-wives, kids, grandkids, and extended family members).

Robb: “Not a problem, we tour a couple of months, go home, go back on tour. This is the best shitty day job in the world. We record in Germany, they’re big fans of heavy metal and our business team is in Germany. We played in China last year.”

BraveWords: How has it been to tour at this time in your life as compared to when you were in your 20’s?

Robb: “This shit keeps you young. I still play like a 20 year old. Also I believe in moderation in all things-except sex. Abstinence from sex is a good thing. I think that’s one of the secrets of my energy–touring over 200 nights in my 60’s. I’ve met unbelievably beautiful women during the last 10 years on Anvil’s world tour and I really enjoy the opportunity to say ‘no’ to these women. My wife is one of the coolest people I know and I am fortunate to have the best wife ever.” 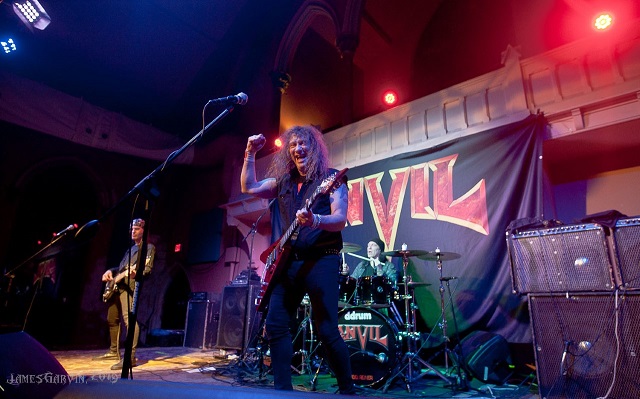 BraveWords: Have there been any particular moments during these last ten years when you thought; we’re living the dream.

Robb: “We supported AC/DC, playing in a giant stadium in front of 50,000 people…we’re making a living playing our music-we are living the dream and I feel very blessed. This is the church of Anvil, spelled FUN.”

BraveWords: Has your song writing become more prolific during the last ten years?

BraveWords: Who writes your songs these days?

Robb: “We always co-write. Lips writes the lyrics but I’m the approval guy-we bounce things off each other.”

BraveWords: The “soul mate” synergy of Lips and Rob - could Anvil have kept going with just one of you?

Robb: “Our fans wouldn’t have taken it seriously. It would be a tribute band with one original member.”

BraveWords: Any new bands you enjoy listening to?

BraveWords: Will there be a sequel to the Anvil documentary? Your fans would definitely be interested in seeing what’s happened during the past ten years and the trajectory of the band’s career.

Robb: “Well, we’re living it. There is 40 minutes of Anvil 2 sitting on a shelf somewhere. Lips says the director is waiting for one of us to die. But we’re living the sequel, right here in real time. Our fans that are here are all part of Anvil 2.”