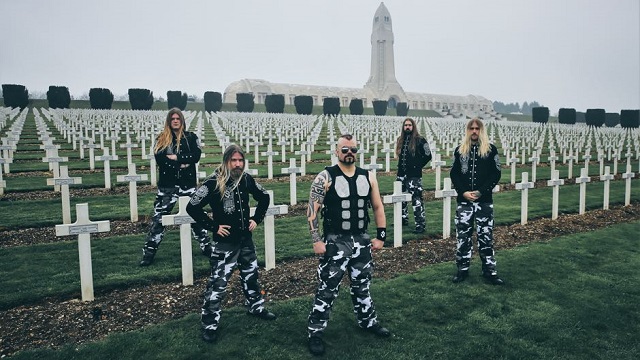 Metal bands and their fans are all too familiar with the stigma attached to our chosen music by people outside the metal community, that only a Neanderthal tribe could possibly find worth and enjoyment in something so loud, obnoxious and abrasive. And the way we dress.... there aren't enough fashion police in the world to right such a horrible wrong. Granted, there is a small group of single-celled amoeboid creatures with our ranks that give life to the stereotype of metalheads being beer-swilling, loud-mouthed, mindless morons, but by and large we are a collective of music connoisseurs that simply love it loud, happen to be bloody creative, and are far more intelligent than the mainstream gives us credit for. Swedish bashers Sabaton are yet another act that have driven these points home with their latest album, The Great War. Staying true to their war-driven epic songs and sound establish in 2005 with Primo Victoria, the Swedes chose to build a concept album based on World War I, which in itself isn't a stretch for the band. Creating three versions (four if you're counting) of the album as well as launching an official Sabaton History Channel to support The Great War concept... certainly not something one would expect of a bunch of Neanderthals.

Bassist Pär Sundström and guitarist Chris Rörland discuss the making of The Great War, what they call their biggest project ever.

BraveWords: You did an album presentation for the media in Verdun, France earlier this year, which is very significant to The Great War concept in that Verdun was the location of the longest-lasting battle during World War I. It's not every day a band gets to do something of that magnitude.

Pär: "It was an exciting thing to be able to do something like that. We've done album presentations in different locations before, but they had no connections to the album (content). This time we had the chance, and we wanted to do something special because it's usually always Sweden and Germany that gets the special events. This time we could do something special in France and it felt perfect... and it we made it into the local newspaper (L'Est Républicain). They were the first ones to interview us when we arrived in Verdun and we didn't know what to expect. They had no idea what Sabaton is all about, but because were there and available they could come out to talk. I think it was nice. And the cool thing is that they wrote 'heavy metal' in the headline (Le Groupe De Metal Sabaton S'invite Sur Les Champs De Bataille). I was happy to see that because we don't think it's correct to say that Sabaton is power metal, because if you think power metal it is all about high pitched vocals and fantasy lyrics."

Chris: "And if a power metal fan hears that, they've never heard of Sabaton. So if they hear Sabaton they're going to be disappointed because that label has given them the wrong idea. We're a heavy metal band and I was happy to see they wrote this. I could imagine that a mainstream newspaper like that would go to official sources, which means they would go to news agencies that we cannot change. Like on Spotify; we're called a power metal band in the bio and we cannot change it. It's nice that this mainstream paper got things right (laughs)."

BraveWords: Having the idea to do a concept album about World War I, is it in any way linked to the 100th anniversary of the end of the war in 2018?

Pär: "In the last few years there has been a lot of talk about The Great War. The 100th anniversary of Armistice Day - the end of the war - was last year (September 2018) and there were so many things in the air. People were talking about World War I almost as much as World War II, which was odd because people most often talk about World War II (which ran from 1939 - 1945). We've done six songs in the past about World War I, and we thought it was a great topic as well as good timing. I think we decided last summer that we would do this concept, and we started to gather material. We had access to the History Channel team, so we didn't have to worry about research because they've done the biggest report on World War I ever. If we needed anything we could contact them and they would say 'Okay, we covered that in Episode 322, and then in Episode 421, and then we did a special episode about this and that...' They are professional researchers and historians, so we had an easy time when we wanted to find information. It's a well-known topic and we could have found this information ourselves, but if you take a song like 'A Ghost In The Trenches' (about a Canadian First Nation sniper, Francis Pegahmagabow), we never would have found that stuff without the History Channel." 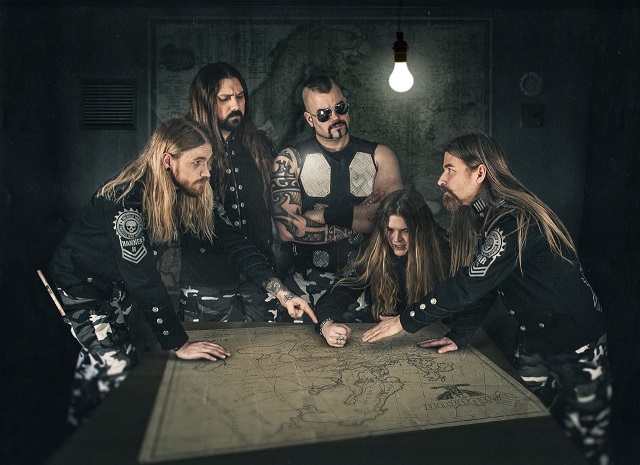 BraveWords: You decided to work with producer Jonas Kjellgren this time out instead of Peter Tägtgren. How did that change things for the band after working with Peter for so many years?

Pär: "It's easy to work with Jonas because he's more relaxed than Peter when it comes to schedules and times, but that's both good and bad. If you're strict on time you know what you're going to do, you have a clear schedule. If you're not strict, there’s no schedule. The advantage was that we were more relaxed this time, and the disadvantage is we didn't know when the album is going to be finished (laughs). With Jonas is like 'If you need another month we'll take another month...' and I was like, 'No!' because we had to follow the release schedule. I needed to push for the deadline, but I like working with Jonas and I think he does a great job."

BraveWords: Were there specific plans for the music in mind for The Great War, like doing things differently compared to (previous album) The Last Stand?

Chris: "Not really. We just write songs in the moment. I think The Great War is very different from the last album. It's still a Sabaton record but there are some new influences. This is the first album where so many of us in the band were involved in the songwriting. I wrote three songs with Joakim (Brodèn), Tommy (Johansson / guitars) and Joakim wrote 'A Ghost In The Trenches', and Thobbe (Englund / former guitarist) and Joakim wrote 'Fields Of Verdun'. And we also had an outside songwriter, which we've never had before; Viktor (Carlsson / guitars) from Follow The Cipher. Joakim and Ken (Kängström / guitars) from Follow The Cipher have written songs together before but he was busy, so Viktor showed him some ideas and it became the title track of the album."

Pär: "The album is very strong when it comes to heavy metal hits. It has several of them. There are a few songs that really stick out... 'The Future Of Warfare', 'The End Of The War To End All Wars', and 'The Attack Of The Dead Men'. And the rest are real fist-pumping heavy metal hits. I think we have more of those on The Great War than we've ever had because normally the albums contain more epic songs. This is more straightforward. We had a bit of an issue because we thought we were lacking a couple songs, thinking it wasn't epic enough, but when the last song was done it was, 'Okay, we're epic again...' (laughs). The album has a good balance." 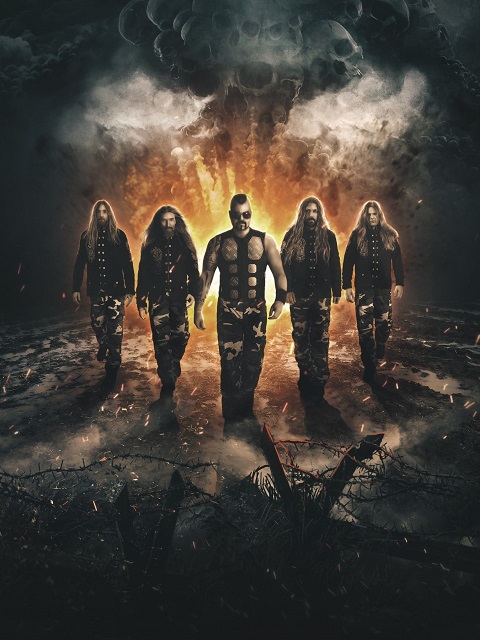 BraveWords: "The Future Of Warfare" is a ballsy album opener in that it's not the most typical Sabaton song...

Chris: "We wanted to open with something unexpected. It was funny, though, because Joakim couldn't write anything that was unexpected, and the demo version of the first song was called 'Last Attempt' (laughs). And Joakim was like 'Okay, I give up, I'm giving one last try to make something that's going to be different...' and what he came up with became the album opener."

BraveWords: And putting the poem "In Flanders Fields" at the end of the album, that's an even more brazen move.

Pär: "It's a poem by a Canadian soldier, John McCrae, who died in the war, and it has been used in many different ways and people have added music to it. This is our version of it to round off the album and the melodies are completely rewritten. We thought that album is so intense that we needed something after this 40 minutes of war to calm down. We discussed a lot about how to orchestrate it and what instruments to use, and in the end we decided to just use the vocals. We also thought it was a nice tribute to end the album." 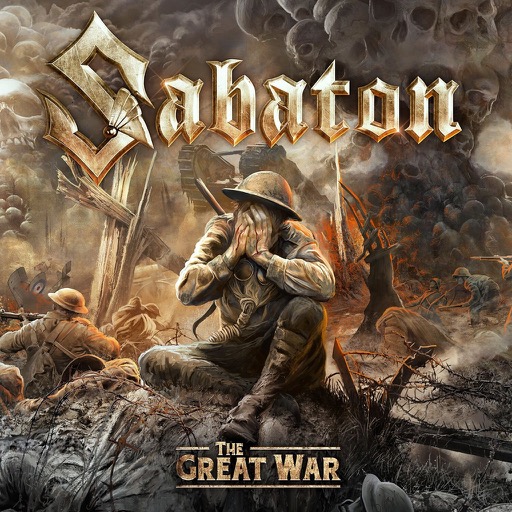 BraveWords: Creating three versions of the album, it speaks to the passion for what you're doing as well as the label's respect for your vision.

Pär: "We've made the album available in three versions for a reason. You can have it without the narrative - so, just the normal version - which is how most people will listen to it. The History Version is the idea that if you want the album, the mood, you want to engulf yourself in it, if you want to listen to it in its complete form, this is the one to listen to. If I'm going to play you just one song from the album, I might as well just take it from the standard version because the narrative doesn't make sense unless you have the context. The third version of the album is the soundtrack to The Great War, which we created with several other musicians."

Chris: "The third version is mainly instrumental, like a Hollywood movie soundtrack, based on the songs we've written. We thought the songs on the album were so strong that it would fit perfectly into a soundtrack version."

Pär: "This album is bigger in all senses than anything we have done before. There are so many things connected to it, like The Great War choir at Hellfest this year, and we also launched the Sabaton History Channel. Thinking about how to plan it was huge work. We didn't really know how it was going to turn out, and we brought in the creative team, but I ended up being the executive producer of the whole series. We're making the stage set into a World War I theme, and to make the album available in three versions, you will see there are a lot of other things coming. We have been very busy and The Great War has been, by far, our biggest project. The album is more than just 11 songs; it's a concept that we took on fully to adapt to Sabaton for the next two or three years."