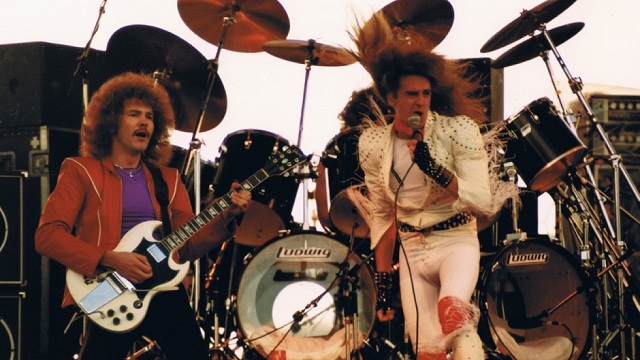 In this exclusive excerpt from BraveWords staffer Martin Popoff’s Denim And Leather: Saxon’s First Ten Years, Biff Byford and Graham Oliver discuss some of the influences upon songs from the band’s classic fourth album, Denim And Leather, issued September 25, 1981. Copies of the book signed by the author are available here. Photos of the band at Open Air München, May 30, 1982, courtesy of Wolfgang Gürster. 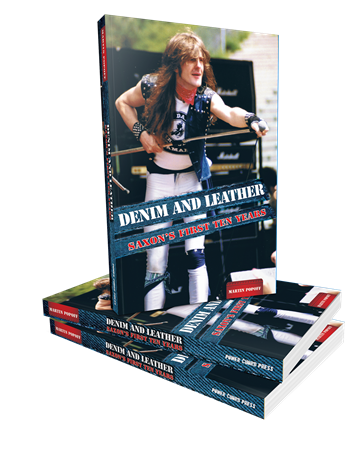 “And The Bands Played On” is of course Byford’s firsthand account of the aforementioned first Monsters of Rock, which took place at Donington Park, August 16th, 1980. Biff talks about the apprehension of what the weather was going to be, that the crowd was 60,000 strong and, apropos of nothing other than a wink to his band, he says we were “strangers in the night.” He also mentions a “rainbow shining brightly.” Indeed Rainbow were the festival’s headliners but they didn’t bring their illuminated rainbow, although there were two big rainbows in the scrim graphics to the left and right of the stage, as depicted on the band’s first two album covers. One supposes they were shining bright because Saxon played in stark daylight. Intriguingly Biff talks about how originally he had four or five additional verses, about American bands and Judas Priest etc., but he shortened it to make it strictly on topic.

Notes Graham, “I heard a song—you can listen to this and reference it—called ‘Whiskey Train,’ by Procol Harum. Robin Trower was playing the guitar on that album. And he played this riff called ‘Whiskey Train,’ in A major. And I heard that song on the radio, at a writing session, having breakfast. And I thought that’s a cool riff. Maybe if I sped it up and played it in E major… so I did. Robin Trower’s went (sings a riff) and I thought (sings his new riff), so it was a very similar. I know Blackmore has complained that some of his riffs were ripped off. But I didn’t steal it; I just heard it and I was inspired to write my own version. And then Paul heard it and thought, ‘Yeah, that’s great, if I did this guitar over the top (sings it)’… And so all the melody guitar, that’s Paul Quinn.” 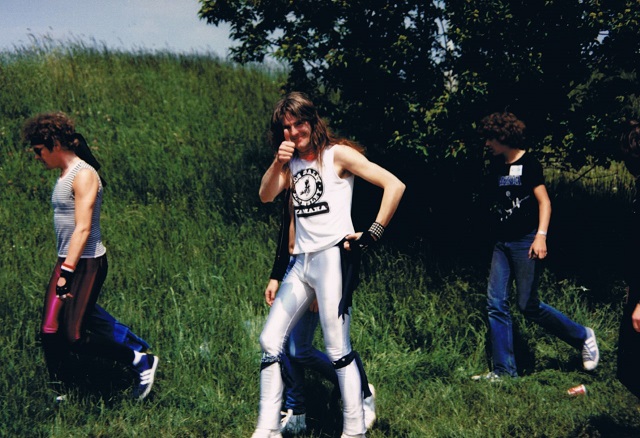 Biff has also indicated that Toto’s “Hold The Line,” a massive single from that band’s 1978 self-titled debut, was an inspiration on the musical structure of “And The Bands Played On.” Biff also recalls that the title came from a vintage movie, but he’s more than likely thinking of a famous song (and not the title of a movie per se) written in the 1890s called “The Band Played On,” which appeared in many films over the decades.

Next, “Midnight Rider” is another ass-kicking metal muncher, yet again, somehow in the spirit of both AC/DC and southern rock, but heavier than both. The rock-solid rhythm bed created by Steve and Pete supports a riff that is almost funky, but sent metal through a distortion level higher than most of the guitars on the rest of the record. At the lyric end, Biff is back to his stories about transportation, only here we’ve got a “silver eagle” flying the band around on a US tour, augmented by the services of a “midnight rider,” in other words, the tour bus. A half dozen US locations are mentioned by name, and Byford fondly recalls Saxon taking America by storm.

Following is Biff’s nuclear war tale “Fire In The Sky,” which finds Saxon back in speed metal mode, balancing tricky intro riffs against a simple and almost punky verse riff. There’s also manic soloing, measured twin leads, double bass drum work from Pete Gill and even a nuclear explosion. Here’s where the record’s pricey-sounding production pays off in spades. Speed metal, with its note density and tendency toward wall-of-sound drums, requires an elevated level of high fidelity rendering, and “Fire in the Sky” indeed works as one of the band’s best technical rockers, taking Saxon further past Motörhead toward Priest, if not the Priest of “Exciter” and “Hell Bent for Leather,” at least the Priest of “Steeler” and “Rapid Fire.” 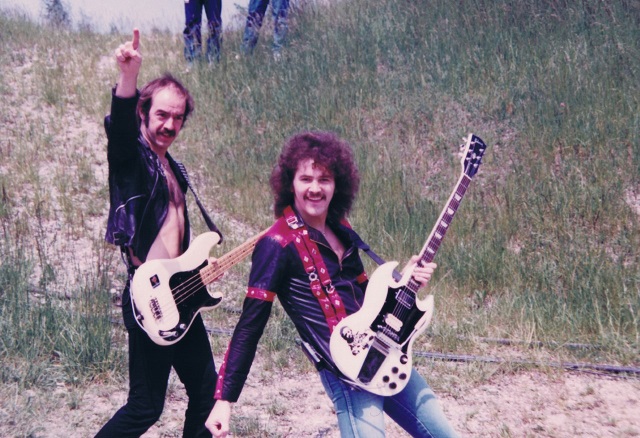 Denim And Leather closes with its epic title track, a big and bluesy stripper rock thumper over which Biff describes what it’s like to be a New Wave of British Heavy Metal fan.

Explains Byford, “The actual title is from an Alice Cooper album, From The Inside, which is a fabulous album. And on it there is a lyric that says ‘denim and leather.’ But obviously there has been denim and leather before (laughs). But it just twinged a chord in my head and when we got a chance to write a song, I was looking to write a song about our audience in the ‘80s to that point, which is the longest three years anybody has ever spent, basically. From 1980 to 1982, actually two years, we had three albums out in two years. It was crazy really, cramming four years’ worth of life into that.”

“Anyway, that’s another story,” chuckles Biff. “I wanted to write a song about our fans and ‘Denim And Leather’ fit the bill, really. We had a big competition in a magazine at the time; I think it was Sounds. That was the forerunner of Kerrang! Metal got so big in the ‘80s, they had to have a separate magazine. So we had this competition and 7,000 or 8,000 people wrote in. I can’t remember what the question was, probably something dumb like, ‘What was my name?’ Anyway, the winners got to come to the studio to record the track with us. So the singing on the end of the original ‘Denim and Leather’ is actually fans in the studio, about 30 or 40 of them.”