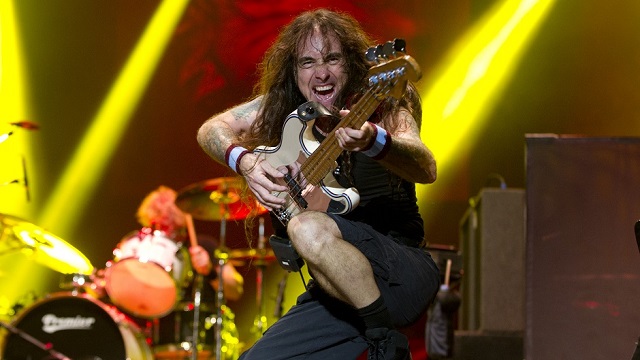 Hard to believe, but as inspiring testimony that an artist has to be an artist, Steve Harris is taking his second banana band British Lion out on a Canadian tour (followed by South America and Japan), commencing November 1st in Toronto, Ontario, home of BraveWords.

But lest you think this is all about reliving the band’s versatile—think Psycho Motel crossed with the wildly divergent first three Bruce solo albums—debut album from September of 2012, think again. Sure, it’ll be that in spades, but we’ll also be hearing material from the band’s sophomore record, in its mixing stage as we talked to Steve, and promised finished by the first date of the campaign.

As for this clutch of shows, the Maiden man’s motivations are many.

“I’m just loving playing in small places,” begins Steve, asked what he specifically is getting out of this short spate of dates, creatively speaking. “I’m really enjoying doing something different, and it’s obviously very different than what I do with Maiden—it’s rock rather than metal. We’ve been doing it for a few years now, and the more I do it, the more I enjoy it. We’ve put in quite a few shows in Europe already, but apart from a cruise ship that we played last year, we’ve not played on terra firma outside of Europe. So now coming to do shows in Canada, South America and Japan is fantastic. Well, not only for me, but for the guys in the band, because some of them have never been to some of these countries. Although we did do the first couple of British Lion videos in Canada. They were done basically in Banff and Vancouver. But they haven’t really been to the other side of Canada. So at the end of the day, it’s great for them. Plus it’s great for me, and great to see them enjoy themselves and do things for the first time. It’s always nice to see that in people. Now I’m back to places, countries and cities I’ve been to many times before, but I haven’t played the small venues.”

Contrasting the British Lion sound with that of Maiden, Steve reiterates, “it’s just more rock rather than metal, really. But then I grew up being influenced by rock anyway, UFO, Thin Lizzy, The Who, Wishbone Ash. The first album was intended to be like that. You know, some people complained about the production, but it was meant to sound retro—that was on purpose. This new album will be different; it’s now a few years later and the sound has evolved over a period of time, as well as from playing a lot live together. But the first album was intended to be like that—it was meant to have that kind of ‘70s vibe to it.” 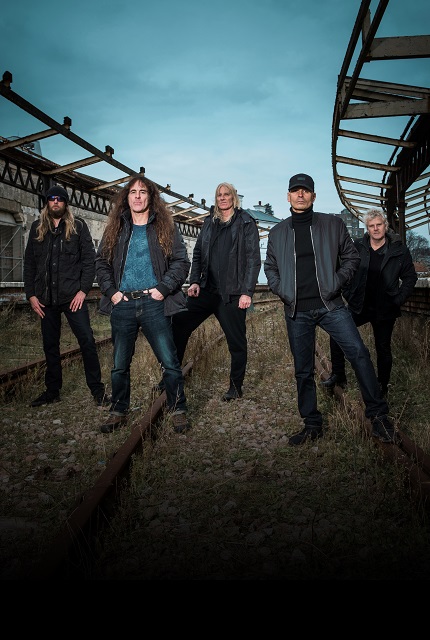 Steve is of course one of Iron Maiden’s two overwhelmingly dominant lyricists, but with British Lion, he essentially cedes that territory. “Yes, a lot of the lyrics are actually written by (vocalist) Richard Taylor. I mean, I do help him along the line with some bits and pieces here and there, but a lot of the time it’s his stuff; it’s a different approach and a bit more personal. I mean, if I do personal stuff with Maiden, I tend to disguise it in other things, in other topics. So this is a little bit more open. For example, ‘Eyes Of The Young’ is about, you know, the way I grew up, but it’s also about my father as well, so it’s a bit more personal. But overall, yeah, I think if people come see it live, they’ll see that there’s a passion there and we just enjoy it. We just have fun. That’s what it’s all about really—having fun.”

One thing Steve likes about this situation is how it takes him back to his experience getting the mighty Maiden off the ground. Steve Harris paid his dues, but more like Van Halen did: outwardly successful immediately, there were a good five years of club days for ‘arry from sort of ’74, ‘75 to 1980.

“Yes, it’s basically going back to how I used to feel, I suppose, when I was struggling with Maiden to try and get noticed,” reflects Steve. “It was a challenge. Everyone’s trying to push… with any new band, you’re trying to get noticed and go out and fight for everything. And that’s the kind of feeling I get now. It gives me that freedom. I really enjoy it. I still enjoy playing with Maiden and playing massive venues and all that business, but I love playing clubs as well—always have done. So, you know, it’s been 30 or more years since I’ve played clubs like I’ve done with British Lion. And some of the clubs I’m going to do now on the upcoming tour I’ve never ever played because we sort of bypassed a lot of them. Whenever I play, whether it be big or small festivals, indoor, outdoor, you know, I still give 110% whether I’m with Maiden or British Lion. Plus it gives me a chance to meet more fans as well. Because with Maiden you tend to go straight off to the next city after the show or whatever, and it’s almost impossible to do that. But with British Lion it’s a different thing; it’s a bit more personal, and you’re up close and personal at the show as well.”

“I always used to say it’s called bums on seats,” continues Harris, still fighting, still healthy of rock ‘n’ roll attitude. “You’ve got to try and get people in. You’ve got to try and entice people into sort of checking you out. It’s not easy to do that with anything these days. It’s not easy to get people to come along to a show or convince people of what you’re doing. Sometimes it takes a long time for the penny to drop and it was no different than with Maiden in that sense. We played clubs and stuff in the UK for four or five years before we really started getting noticed and taking off. But I’m not trying to be a worldwide successful band with British Lion—that’s not necessarily the purpose, really. It’s just having fun, playing clubs and doing it all for the right reasons. Still, it’s a challenge and I do enjoy that.” 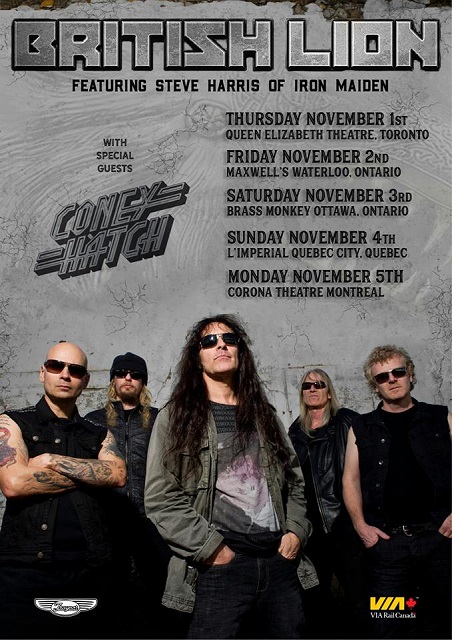 Steve frames the second British Lion album as, “more live and vibrant. I think the songs are really powerful. There’s some on the first album that are really powerful too, but this is kind of more as we are now—it’s five or six years further down the line. It’s different in a positive way. So yeah, it’s a lot more live-sounding. We’ve done it more kind of live in the studio, one or two takes type thing, with the backing tracks. A strong track is one called ‘Spitfire’ and we’ll be playing that and some other stuff off the forthcoming album. It’s a strong album. It’s really hard to be objective about stuff when you’re just sort of working on it. I don’t know if there’s anything particularly experimental or proggy on there. ‘Elysium’ has got a different flavour to it, strong catchy melodies and a different vibe—powerful track but in a different way.”

And with that, Steve’s plate, or brain, or Piece of Mind-like plate of brains… is full.

“Well, there’s not really time for anything else, to be honest. It’s tough to juggle all this stuff right now without thinking about something else. I think another project might kill me off (laughs). But having said that, I am enjoying it. I’m loving what I’m doing in both bands. I love going to different regions with both projects, so I don’t really think there’s room for another one even if I wanted to do another one, to be honest. Also I don’t feel like doing another one. I’m fulfilled in what I’m doing in both projects right now.”