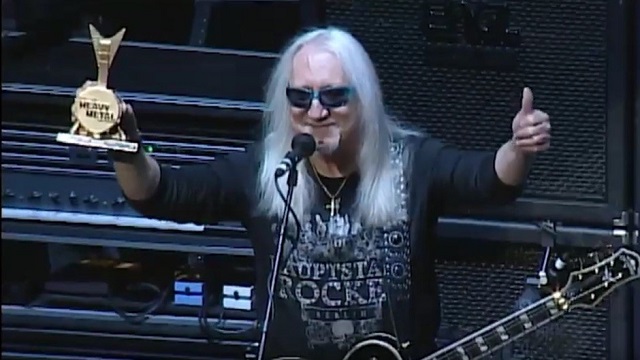 The Hall of Heavy Metal History has been rapidly gaining traction over the past 12 months, a major indicator being the number of acts quietly behind the scene jockeying for inclusion, causing political flares like you wouldn’t believe. A poignant induction had long-time Heep drummer Lee Kerslake brought over from England for induction at NAMM earlier this year, which also coincided with successful efforts by Hall chairman Pat Gesualdo to have Ozzy and Sharon Osbourne arrange for Kerslake, gravely ill with cancer, to receive his RIAA multi-platinum certifications for his work on Blizzard of Ozz and Diary of a Madman, said to be the drum titan’s dying wish.

Now it was Heep’s turn, with myself on hand at the Mohegan Sun Arena in Connecticut to do the honours, on stage and mid-set, before a crowd of about 6000, there to witness this most vital of “heritage” acts plus headliner on the eve, Judas Priest, inducted at Wacken last summer.

On hand to witness the festivities were radio legends Vinnie Penn up from New York (and there with his son) and Shawn “Sixx” Clayton from Boston, who met with the band separately before the induction, with Clayton interviewing Gesualdo and myself about the event. Pat had explained to Clayton how the idea for the Hall came up after an initial snub for Deep Purple, one of his favourite bands and, amusingly, also pretty much Clayton’s favourite band of all time. Gesualdo also spoke of how he has tied in to the Hall, his non-profit DAD (Drums and Disabilities), with chapters all around the world using the magic of drum therapy to re-wire misfiring synapses and help improve motor performance impeded by certain physical impediments—in fact, the Hall is set up as a non-profit for the benefit of those with autism, dyslexia, ADD/ADHD, Tourette’s syndrome, ODD, OCD and Down’s Syndrome who benefit from the work of drum therapists around the world, a certification only Gesualdo is legally entitled to confer upon his staff. 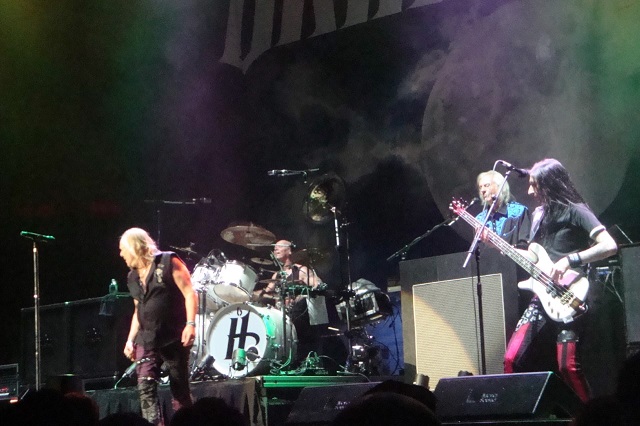 I was particularly on board and enthusiastic about this induction because with Heep, the Hall gets one of the holy trinity of bands who invented heavy metal back in the first half of 1970, the others being Black Sabbath and Deep Purple. It is also the tribute to fallen brothers of founder Mick Box—Gary Thain, David Byron, John Wetton and Trevor Bolder—who helped the band achieve their worldwide exalted status. But Heep are no mere historical footnote. From 1972 through 1974, the band achieved four RIAA gold certifications, with Demons and Wizards, The Magician’s Birthday, Live and Sweet Freedom, en route to a career playing headlining arenas through the ‘70s. Bills were filled out by many bands who would become huge, with Rush getting their first break playing in the states supporting Heep, who, through their friendliness and mentorship, helped set Rush’s policy of always being kind to warm-up acts. 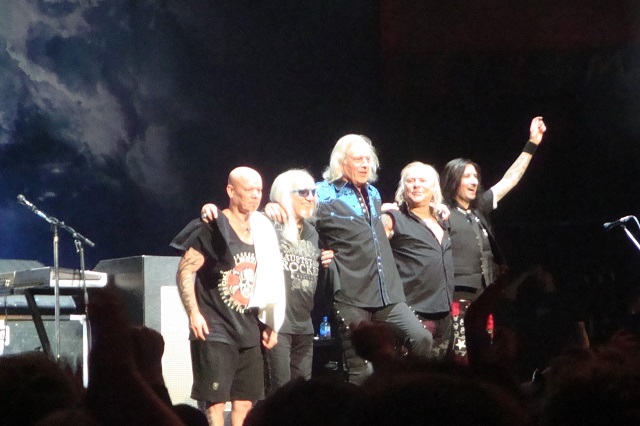 Later, the band had an energetic, heavy and well regarded run through the early ‘80s with Abominog, Head First and Equator, but it is the astonishing string of creative masterwerks instigated by 1995’s Sea Of Light through to last year’s imposing Living The Dream that has made Heep the most ass-kicking and vital of all grandfatherly hard rock icons. The core of the band—Mick Box, Bernie Shaw and Phil Lanzon—have been together now for over 30 years. They are joined by drummer Russell Gilbrook and Davey Rimmer who have proven themselves the classic rock equals of their storied elders.

In any event, there it was: five songs in, and in advance of the classic that started it all, “Gypsy,” first track of the debut record, Heep received their five gold trophies, each depicting a Flying V stuck headstock into the top of a bass drum, the thumping instrument that cured Gesualdo 100% from his own physical afflictions as a child, bringing to life the inspiring concept of drum therapy. A few words of appreciation from Mick “’Appy Days” Box and the band was back to the work of giving Priest more than a run for their money. Two legendary acts on the night, mission accomplished—who will be next?