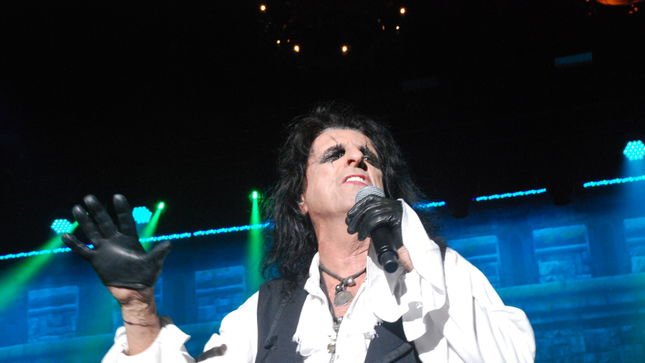 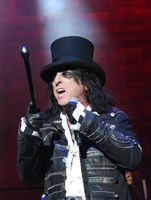 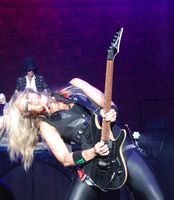 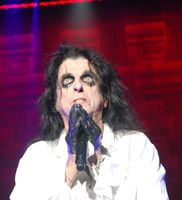 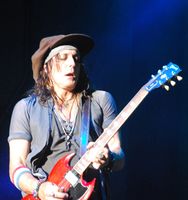 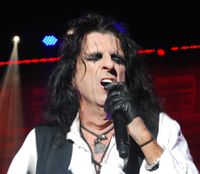 Alice Cooper’s Ol’ Black Eyes Is Back tour brought his horror show to the PNC Bank Arts Center in Holmdel on August 15th. In support of his latest album, Paranormal, ‘70s type rocker “Falling In Love” the lone track in the set. Usually, Alice’s setlist is usually a mix of songs mostly from the ‘70s, one or two from the ‘80s, ‘90s, 2000s, and the most recent album. This year’s tour sees a focus on the ‘70s and ‘80s, and shuffle in selections. His stage set also is different, recalling the ‘80s Constrictor/ Raise Your Fist And Yell era, castle backdrop and brick work with a couple props, and coffin (where Alice emerges from for “Escape), also playing five from the decade.

A giant mobile costumed character appears during “Teenage Frankenstein”, and “Feed My Frankenstein” are often in, plus obviously hit “Poison” from Trash. But bonus’ on this run are “Bed Of Nails”, and (a creepy girl in a blood stained dress) the heavy “Roses On White Lace” with guitarist Nita Strauss shredding. She really has become a star in her own right as a player. “Devil's Food” band only jam was energetic prior to the tragic “Steven” as Alice is escorted out by two oversized looking dolls, followed by the guillotine decapitation. Tour mates, Halestorm’s Lzzy Hale, guitarist Joe Hottinger and bassist Josh Smith, Chris Cerulli from Motionless In White, joined Cooper for closer “School’s Out”.