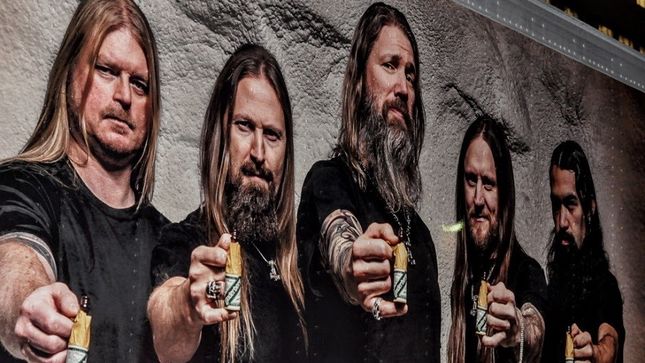 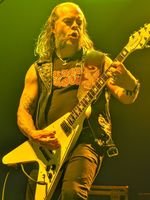 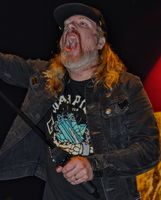 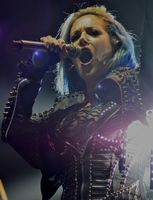 Best touring package, top-to-bottom, in recent memory! Damn shame about the rush-on, rush off set times though: beginning at 7 PM and done by 11. For four internationally established bands? Like their conquering ancestors, the Swedes brought several allies abroad their longship, in hopes of taming the restless natives. None more fervent than an NYC horde, hopped up on a simultaneously taking place Yankees playoff game. Alongside Amon Amarth were countrymen Arch Enemy, At The Gates and Grand Magus, the latter setting (long overdue) foot in North America, for the first time. The Hammerstein Ballroom is too classy a venue for metal shows: triple balconies, four more loge/opera boxes on each side. Most have known something, as it was mere tickets away from a complete sell-out and we were shoehorned into the place.

Centerpiece, onstage, is a giant horned Viking helmet (horns raised, of course) with the drum kit atop. At various points throughout the night, eyes (or the blaze of digital fire) peered from behind the armored slits. Step-risers lined the front of the stage, on which the guitarists and hulking frontman Johan Hegg would temporarily perch themselves. While the musicians were content to pinwheel their hair, headbang and occasionally switch sides of the stage, the bellowing Hegg raced about, as if in some strange obstacle course/scavenger hunt, requiring frequent visits to all corners of the stage: up on the drum riser, down, back to the twin platforms at the rear (otherwise reserved for the guitarists), down, front of the stage, up on a riser, down... Quite the aerobic workout. Forget the Stairmaster, maybe gyms should start adopting Berserker core! Helps burns off all those beer calories. 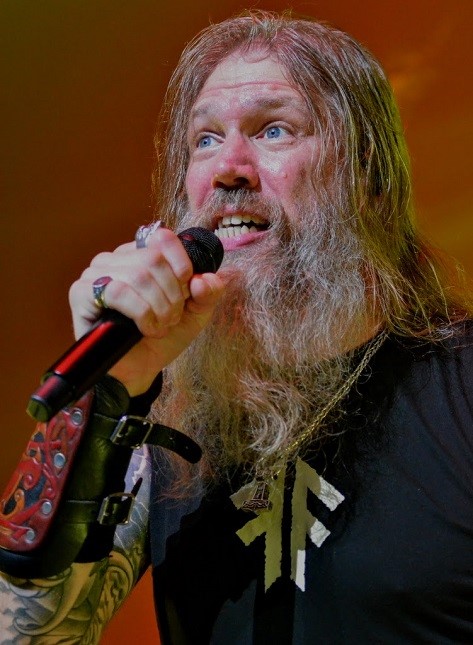 A curtain, emblazoned with the word "Berserker" and the symmetric rune which adorns the matching black t-shirts onstage, obscures the band from view, but in the photo pit, we can see Hegg fist-bumping his bandmates, as the symphonic strings intro tape rolls. When the cloth barrier drops, there's Hegg, center stage, doing a bit of air guitar, as the four across the front engage in a little synchronized headbanging. Newbie "Raven's Flight" kicks things off, lit in blue/green and accented by a ton of strobes. There are repeated blasts of flames, erupting all around the stage. Real fire! At an indoor show, in the USA! Virtually unheard of, since Great White and the Station nightclub tragedy, 16 years ago. Guess there is SOME advantage to playing in such a ritzy joint. Sadly, "Runes To My Memory", the lone inclusion from personal favorite, With Oden On Our Side, was deleted from the running order (although played earlier on this tour). So there better be an adequate alternative. In its place, "Death In Fire” punctuated by multiple namesake plumes. The title tracks tend to get the biggest crowd responses, case in point, the red/pink hued "Deceiver Of The Gods". Onstage, we're visited by a green eyed, horned being, with a fur cape and wielding a spear. Smoke emanates from the drum riser and then, another burst of flames, during "First Kill", under green lights. Those in the crowd not destined to beach themselves in the photo pit pogo up and down, for "Crack The Sky".

The band retreats to higher ground (literally, with Hegg singing from atop the helmeted drum riser) as a pair of Viking warriors wage battle, each bashing his sword of the other's shield, to commence a smoky, red lit "The Way Of The Vikings". One combatant victorious (slitting his rival's throat), he stands on the riser at the stage edge, as simultaneous eruptions of smoke pillow from pores throughout the stage. Once the swordsman leaves, the band returns to the front, descending the cleverly disguised staircases that curved around the ubiquitous helmet. The spotlighted frontman thanks the crowd, prior to a staccato "Shield Wall", which sees a vast portion of the crowd sit on the floor and emulate roaring a boat, in unison. Quite the spectacle. For emphasis, there's a hunched over and lurching ax toting Viking flanking each side of the drummer. After "Guardians Of Asgaard" the singer says he needs a drink. Cue "Raise Your Horns". Illuminated in yellow, it is the proper set closer. Viking sentries stand watch, from a similar post, for blue tinged "The Pursuit Of Vikings", the fans singing along to the bouncy guitar rhythms. Even those relegated to the bar, at the back of the venue, know the words, singing "Odin, guide our ships" chorus. Hegg, left leg on the stage front rider, jokingly tells those unfamiliar with the lyrics (was that anyone in this packed house?), "It's death metal, no one know the words!" For the concluding "Twilight Of The Thunder God", there's an inflatable dragon, stage left, made to resemble the one adorning said album cover. Hegg stands like Thor, oversize hammer in hand. As the band launch into the speedy riff, he smashes the hammer on the shadowbox riser, there's and explosion and smoke bellows skywards from the four stage front risers, as columns of flames lick the air. The gods would be pleased! 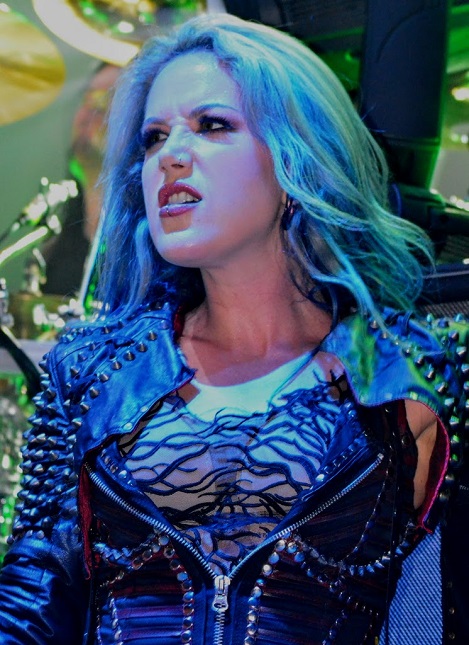 After pulsating white lights, during their "Set Flame To The Night" intro tape, the stage goes black before Arch Enemy hit the stage. When re-illuminated, there's a spotlighted Michael Amott, blazing away on "The World is Yours", stage right. He's soon joined by the remaining Enemies, including Alissa White-Gluz, in her bat-wing outfit, a tribute to ‘70s Gene Simmons. She growls, karate kicks and stalks the stage like a woman possessed. In fact the voice could be Reagan from The Exorcist. She's uses the mic stand as a de facto air guitar prop and also has adopted exaggerated, slo-mo stage antics. Conversely, the music comes hard and fast, the lighting tech seems to want to flash a different color, with each note, a virtual impossibility, but quite a visual spectacle. Yellow searchlights sweep the stage as Jeff Loomis (ex-Nevermore) and Mike Amott trade leads in the crowd sing-along "War Eternal". In the audience, ran into Michael's brother Christopher (currently with Dark Tranquillity), checking out how his old band was doing. Loomis & Amott are together, center stage, to begin "Ravenous". The singer points finger guns towards the crowd, urging them to sing along, At that moment, was struck by her resemblance to film comedienne Madeline Kahn (Young Frankenstein/Blazing Saddles). Never made the connection before tonight. Saving the best(?), well, at least best known, for last "Nemesis" sees a pink stage propagated by plenty of yellow, as the singer pin wheels her hair, stage front. Those not participating in the mosh pit sing along. By all accounts, a success.

As usual, Tomas Lindberg took to the stage in baseball cap and denim jacket, as At The Gates tore through nine songs, beginning with red colored "To Drink From The Night Itself". It sees Lindberg repeatedly punching the air. Throughout their time slot, the acid throated singer predominately stayed stage right, not that much space for the guys to maneuver about, not that it's ever been these Swedes game, anyway. Much as they try, most still want to hear Slaughter Of The Soul material and three such numbers (including the title track) are still in the set.

Nuclear Blast might think otherwise, but JB & Co. (aka Grand Magus) wisely opted to introduce North Americans to their best material, not merely plug the latest release (Wolf God). All the more important since they were afforded time for just five songs. Place was pretty sparse when they began with "I, The Jury", the drums pushed right to the edge of the stage, thereby separating singer/guitarist JB Christoffersson from bassist. Fox. At one point, the mastermind, clearly thrilled to finally be Stateside, said, "Grand Magus in New York City. I have to pinch myself." Great to see personal fave "Like The Oar Strikes The Water" in the set, alongside a pink lit "Iron Will", where JB attempted (in vain) to get a group fist thrust going, come each titular chorus. Fox adds backing vocals throughout the set closing "Hammer Of The North" which caught the attention of many late arrivals.