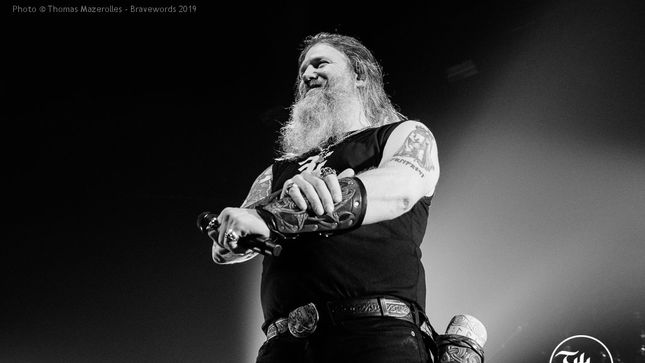 Death metal fans were in for a Swedish treat at the MTelus as they were there to see Amon Amarth (promoting their Berserker album), alongside Arch Enemy, At The Gates and Grand Magus on this night filled with intense music.

Grand Magus was playing in Montréal for the first time in front of a lot of eager fans. Although they have a new album out called Wolf God, the band only played the song “Dawn Of Fire”, but got the crowd moving with the excellent “Like The Oar Strikes The Water” and “Iron Will” before closing their set with their classic “Hammer Of The North”.

At The Gates is used to play in front of an energized Montréal crowd and this show was exactly that once again. They did not waste any time as the songs followed each other rapidly while the fans pushed each other vigorously.  It was surprising that they only played the songs “To Drink From The Night Itself” and “The Colours Of The Beast” from their last album and focused their set on the album At War With Reality and the excellent Slaughter Of The Soul. The fans did not hesitate to show their appreciation and hoped for a longer set, but the band ended their performance with the songs “Death And The Labyrinth”, “Blinded By Fear” and “The Night Eternal”.

Two years have passed since the last show of Arch Enemy, so it is understandable that the fans are impatient to see them again. By now, the place is packed when the band gets on stage to play “The World Is Yours”. Alissa White-Gluz is once again in great shape and interacts with the fans constantly. Since the band has a shorter set, they basically play a condensed version of their previous show in the city. The only song that is added to the set is “First Day In Hell”. Michael Amott and Jeff Loomis are once again excellent on guitars and both of them have a blast, particularly on the songs “Ravenous” and “Nemesis”. The crowd was wild throughout their set, but it seemed like they were saving their energy for the headliners.

With a new album their focus, Amon Amarth finally gets on stage once the Viking helmet acting like a drum riser is finally assembled. The succession of the songs “Raven's Flight” and “Runes To My Memory” electrify the crowd instantly and got the fans pushing each other vigorously. The band spread the four new songs from their new album wisely during their high paced show. As always, Johan Hegg is very dynamic on stage and constantly interacts with the crowd. The fans saw a god walk the stage during the song “Deceiver Of The Gods” and two Vikings fighting each other during “The Way Of Vikings”. The surprise came from the crowd towards the end of the set as many fans sat on the floor during the song “Raise Your Horns”. Their set ended with the excellent “The Pursuit Of Vikings” and “Twilight Of The Thunder God”. It is not surprising that most of the fans were there to see Amon Amarth and this was pointed out by all the crowd surfers that were seen throughout their energetic set.

Fans really liked their death metal mini festival, and they were already salivating at the idea of coming back the next day to relive this experience once again as the tour was in Montréal for two nights.