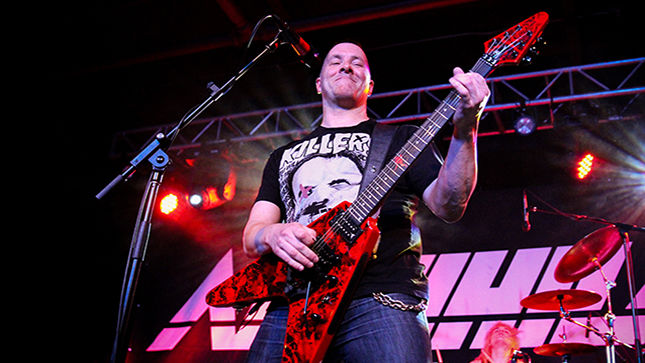 What a rare and wonderful occasion to witness two of Canada's best thrash metal acts on the same night in the same room. With over 500 fans gathered to pay their horn-and-beer raised respects to the legendary duo of Razor and Annihilator, the energy and excitement brewing in the room was palpable. Without a flinch, the mighty Razor ripped into a set that literally felt like a two to three decade time-warp, landing somewhere smack-dab after the release of 1990's classic Shotgun Justice album. The band was in fine form, and their groove was unstoppable - reaching epic, mind-blowing proportions. The guys steam-fucking-rolled through their set, pumping out jams from each and every album in their relevant-as-the-day-it-was released library of unparalleled thrash anthems.

It's been 23 loooooong fucking years since Annihilator's last graced a Canadian stage. I'm almost certain 50% of the night's attendees were sperm waiting to swim the last time Jeff Water's and crew pummeled Canada. Thankfully, the boys have been very active elsewhere on this planet, playing many festivals abroad in the interim, and it shows - these guys are tighter than... well... you know the rest. With such a formidable catalog of anthems to choose from, I was afraid that some of my faves might have been long forgotten. This was not the case. Jeff dug deep for this one - and a beautiful bounty of tunage from the first three Annihilator albums was spewed forth, like a hot sticky mess shot right into my aural canals... an eargasm of body-shivering proportions.