DEICIDE Bring The Blasphemy To Montreal! 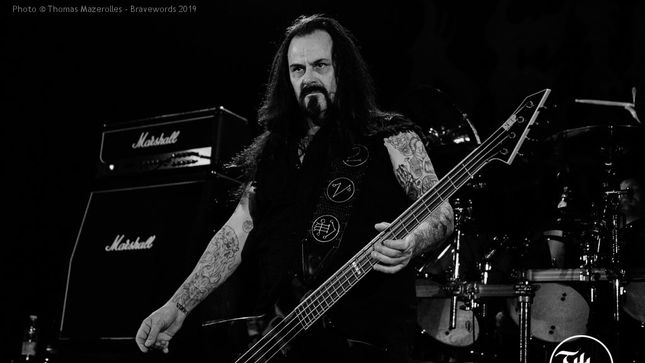 Death metal fans were gathered at the Astral on May 29th in Montreal to see the legendary band Deicide on their Overtures Of Blasphemy tour. They would also see The Absence, Jungle
Rot and Origin on this night filled with intense music.

The Absence was finally back in Montreal after a hiatus of over eight years. For that reason it was not a surprise that many fans were gathered in the Astral to see them once again. It did not take long for them to make circle pits and to push each other to the rhythm of the intense music. The musicians were really dynamic on stage and Jamie Stewart constantly interacted with the fans. The band played a new fast and aggressive song called “Walking Shadows” before ending their short set with “Dead And Gone”.

Jungle Rot had barely started playing the song “Doomsday” that the fans were already pushing each other aggressively. The musicians were very intense on stage and played song after song to feed a very hungry crowd with their violent music. Dave Matrise does not speak much in between songs, but he took time to instruct the fans to create a big old school circle pit for the song “Strangulation Mutilation”. It took a long time, but finally a crowd surfer was seen during
“Psychotic Cremation” at the end of their set. Even if it was a short set, the band gave an awesome performance that was very appreciated by the fans.

Origin was the most technical band of the night, but the fans were really excited to see them again after waiting almost five years. The musicians are very dynamic on stage and vocalist Jason Keyser does not hesitate to interact with the crowd, he instructs the fans to make circle pits and to stage dive. He even helps them to get on stage and shows them to dive in specific places. Their fast music is intense and so technical that is does not reach everyone, but many fans really enjoyed their music. Jason even did a little crowd surfing before asking for a wall of death for their last song.

It is now time for Deicide to hit the stage in front of a packed place. The fans do not hesitate to push each other furiously as soon as “Dead By Dawn” and “When Satan Rules His World” are played. The sound is not as good as any of the previous bands and is way too focused on Glen Benton’s bass and Steve Asheim’s drums initially, but will be more balanced as the show goes on. That being said, Glen’s vocals were difficult to hear during the whole set. As much as their music is powerful and aggressive, the musicians are pretty much on autopilot and seems to want to get out of town as soon as possible. Chris Cannela is the only one that is having one hell of a great time on stage left. A fan tried to stage dive, but Glen did not appreciate the violation of his sacred space and pushed him off stage. Another tried it and stayed away from Glen, but he ended up unplugging Kevin Quirion’s pedal board in the process, so no other fan tried its luck with that. Things did not get better for Glen as he moved away from two beer glasses that were thrown on stage. That was enough for him and he just played song after song to finish the set without interacting with the crowd from that moment on.

Fans really liked their death metal night, but sadly it only took a few overzealous ones to ruin it for everyone else during the headliner’s set.