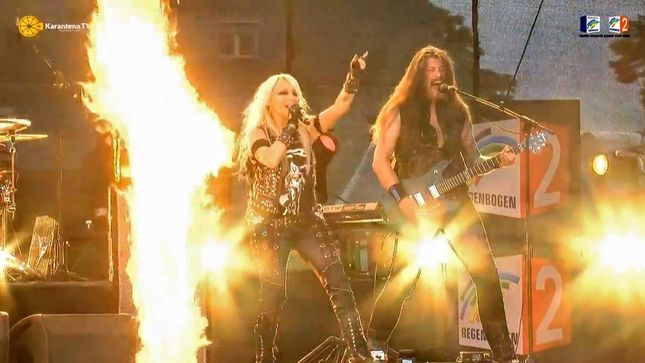 You can't keep a good girl (locked) down. Strange times call for inventive measures and overseas someone decided a metal show in a drive-in theater, fans staying in their vehicles, made sense. Reportedly, the audio was broadcast on your car radio. So no surprise that German national treasure, Doro Pesch was one of the first to christen the "new" summer festival concept: her first of two such gigs. Stage erected next to the movie screen, she was joined by the "European" line-up, namely guitar tandem Bas Maas and Luca Princiotta, who rarely make it to North American dates (most recently substituted for by ex-Warlock guitarist Tommy Bolan and special guest like Chris (Savatage/TSO) Caffery and/or the ubiquitous Bill Hudson). A recent transplant to Deutschland, drummer Johnny Dee was there, but mainstay bassist Nick Douglas was a casualty of the trans-Atlantic travel ban. Have seen a few shows without Dee, but never without the bouncy Metal Tigger on bass, stationed next to the petite blonde, adding backing vocals. Tonight, he was replaced by former keyboardist (and fellow Philly-area native), Harris Young. 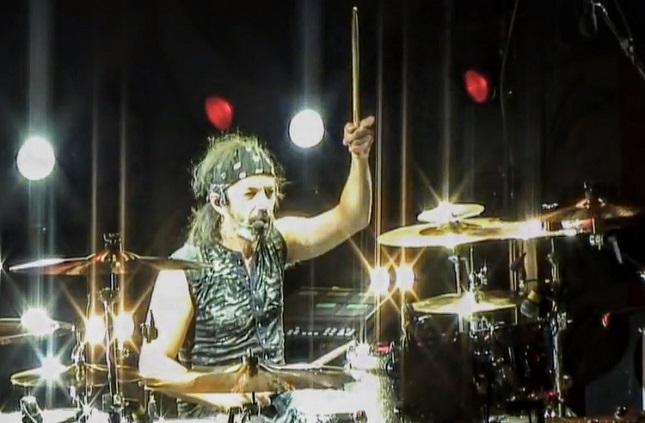 Dee clicked off the opening flourish to "Earthshaker Rock" a few seconds later, in an accompanying puff of stage fog and four flame cannons, lining the front of the stage, Doro made her entrance. The nearly two hour performance was hit laden, with a couple of recent album tracks, but lacked the debut of her forthcoming "Brickwall" single, that many had hoped to hear. There were multiple cameras, although the two tight angles, from the top of the lighting rig, offered little. After a few tunes, the video director began overlaying multiple exposures. Throughout, kind of felt sorry for the inhabitants of the massive house across the street: living next to a drive-in, is one thing, but never imagined themselves having to endure a rock concert! Anyone who has witnessed the diminutive Deutsche dame knows she's usually at the foot of the stage, slapping hands with the fans, or offering them the chance to sing along. "I Rule The Ruins" is, typically, one such number. The guitars come together behind Doro midway through, but the standard "left side vs. right side" bit fell a little flat, at social distancing. However, there is something right with the world when a vintage VW bug is in the front row in Germany! Although they have prohibitive DWI laws (but anyone, apart from the driver, can imbibe in a moving vehicle), beer bottles were noticeable on the roof and hoods of a few parked cars, some of the occupants hanging from the windows and/or sun roofs. 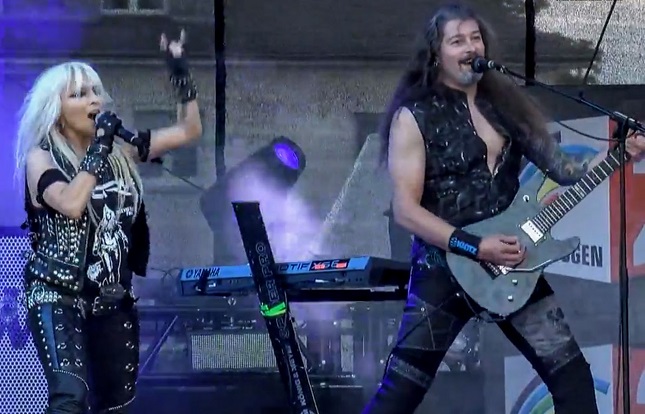 In the evening's dusk, the smoky stage threatened to, at times, obscure the band. Between song banter is a combination of her native tongue and English. She demands fists aloft for "Raise Your Fist In The Air", as all four guys provide backing vocals. She jokes about all the black cars in attendance "being metal," as she launches into robust, red/yellow lit "Burning The Witches", punctuated by flames, come the titular chorus. Doro is a kinetic dynamo, not just perpetually in motion, or headbanging, but using her hands to implore the crowd, thrust a fist skyward, clap or throw the metal horns. She valiantly tries to get the assemblage to participate in the call & response portion of the title phrase. Another dose of old school, "Fight For Rock' followed. Pink lit newbie/ballad "1000 Years" saw Princiotta switch to keyboards. 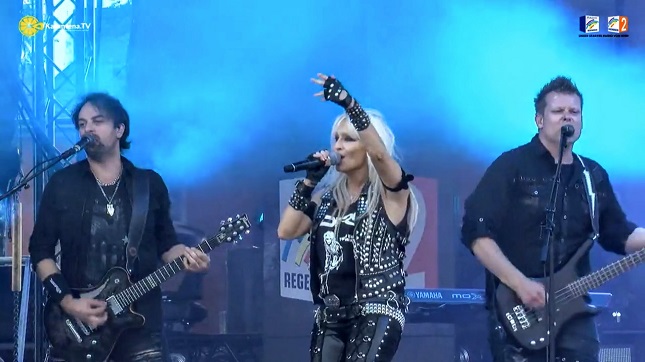 Mid-tempo "Night Of The Warlock" begins with a piece of theater. Under a canopy of smoke, a gray-haired, walking stick wielding wizard appears onstage, as a pre-recorded voiceover bellows forth. The cryptic figure stays onstage throughout the minimal lyric track. By this time, it looks like multi-alarm blaze must be underway, beneath the stage, as a constant blanket of smoke envelopes everything, even though they're in the open air. No such conflagration, but the haze is thick. The second, of three, from last year's double album, namely "Blood, Sweat and Rock ’n’ Roll" gets the heart pumping again. Speaking of cardiac responses, the heartfelt "Für Immer", sees dueling keyboards (courtesy of Luca and Harris), the stage bathed in purple (with dramatic lighting highlights), as mobile phones sway in the crowd and car headlights pulsate. Afterwards, right back to the speedy syncopated drums of "Hellbound". Great that so many of the tracks from the initial pair of Warlock albums are still featured prominently. 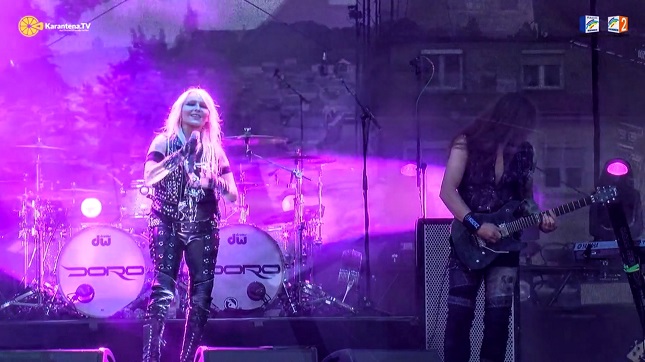 The mid-section of the set bogs down a bit, due to Dee's spotlighted solo, with the chanting chorus of Kiss' "I Love It Loud", plus the deep blue (almost blacked out stage) "Wacken Hymne (We Are the Metalheads)" and her rendition of Judas Priest's "Breaking The Law" (a tribute to the Brits taking Warlock as an opening act, decades ago). Hell, at this point, I don't even want to hear Halford & Co. play it (especially at the expense of another classic, say the absent "Metal Racer"). That said, the last half hour of the show was pretty much stellar, straight through, beginning with the final newbie, fog shrouded "All For Metal". Uncomfortable with the muted response, and probably sick of all the enforced social distancing, Doro broke down the wall (Germans are good at that, I hear) leaving the stage to wander through the parked cars, shouting the title/chorus and (finally) getting to the fans. You can't keep Doro away from her public! While still standing with the fans, she asked for requests, returning to the stage for the proffered "Love Me In Black", but not before someone brought their child next to the singer (no touching!) for a photo. 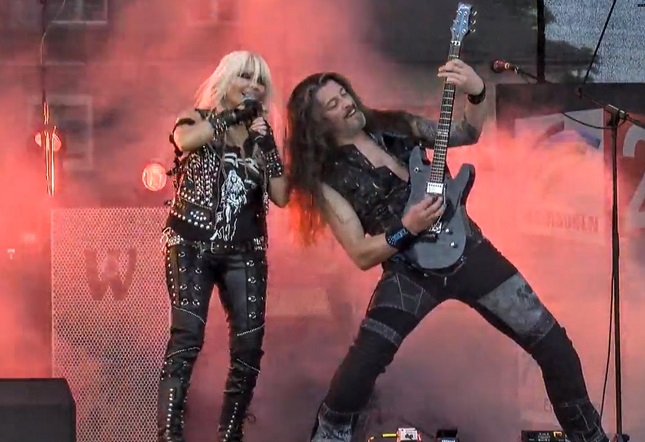 She continues to field calls from the audience, settling on the staccato "Metal Tango". Much of the natural lighting is gone, leaving only the drummer regularly visible/lit, as alternate pink & white spots sweep the stage. Headlights flash in appreciation for the announced "East Meets West". For this climactic event, Maas drops to his knees, as he cranks out the tune. One last song, in the limited time they have left. What will it be? Despite initial protests from the lady herself (and Dee, visibly turning thumbs down) a demand to hear "Für Immer" a SECOND time(!) is granted. Highly unusual, but apt for the topsy-turvy global situation. Regardless, Doro aims to satisfy and for that consistency, we should all be happy. Can't wait to attend in person. Hopefully sooner than later!