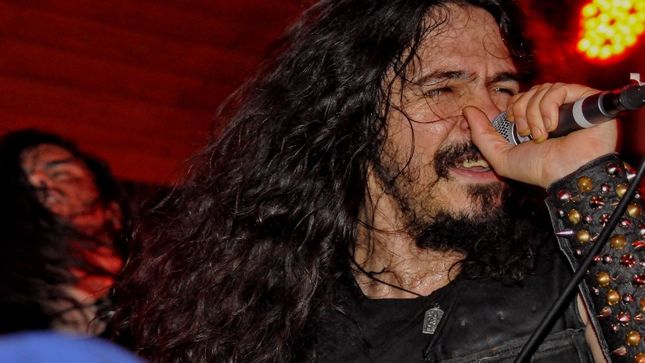 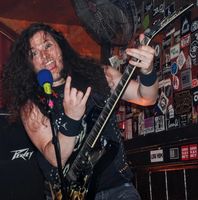 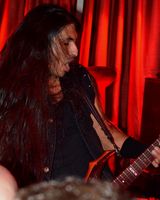 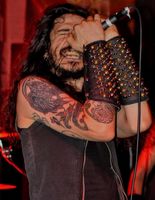 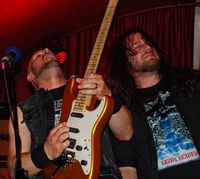 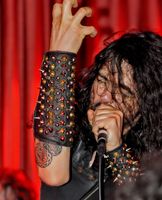 With all the retirements and deaths, metalheads keep lamenting, "Where are tomorrow's headliners going to come from," and in the next breath, admit to not buying CD, refusing to travel out-of-town to see a show (if they even attend anymore) or how clueless they are about up and coming acts ("They don't make any bands like...anymore"). Folks, merch & tours are the lifeblood of fledgling bands and if we don't all support them, there won't be any viable replacements. Holy Grail have long said (figuratively) "Bullshit!" and hit the road, regardless of fame or riches, although recently there's been a suspicious 18 month lull in activity (given the nearly constant underground treks, since being a high profile opener on Blind Guardian 2010 North American tour). Not to worry, though, James Paul Luna informed us that there are songs laying around, awaiting a new recording contract. Striker are Canada's like-minded road dogs (six studio efforts under their belt) and relative newcomers, Bewitcher have had success getting on many fests, around the country. If ever there was an event/movement that warranted a metallic call-to-arms, this is it. Get out and see this package! Hopefully more will follow.

The newly mustachio bearing James Paul Luna joked that "It's been three years since (Holy Grail) were here and like nine since we wrote any new material" And while they did debut "Wasted Time", it was the back catalog that brought a rabid pack of fans to Kung Fu Necktie on a Tuesday night. The postage stamp size stage couldn't contain Luna, nor guitar whiz Eli Santana. The singer screams his lungs out, from all corners of the stage, while the yo-yo trickster-guitarist frequently jumped atop the shadowbox and played the axe vertically. "Fight To Kill" kicks things off, a dizzying fury of flailing hair and moving bodies, on the stage and in the crowd. "Crosswinds" sees Luna employ some gruff vocals, but his soaring top end is truly his calling card. Few have his vocal ability, old school or in the newer generation. Shredding "Call Of Valhalla" leads into "Those Who Will Remain", as close to a sing-along as Holy Grail possess.

"Off The Rails" is an apt description for the visual component, as speedy, traditional metal plays out in front of you. "The Blackest Night" concludes the proper set, but we're not done yet. Come the encore, following the title track from Ride The Void, Luna acknowledges Brave Words and references Rich Catino's Pantera-Power Metal t-shirt, as "Hard Ride", from said disc, was up next. The song slots nicely next to the Holy Grail originals. Only one way to end things, "My Last Attack". Much like the start, bedlam ensues. Great to have Holy Grail back in action, now get that records out!

First time in Philly, for Striker, and a good portion of the attendees were there to see the Canucks. Stage drowned in fog, just wind them up and watch them go. More than once, frontman (although on the minuscule stage, everyone but the drummer was technically up front) Dan Cleary got a face full of the four exploding wisps that were repeatedly triggered throughout the show. Occupational hazard? No matter. Green lit "Head First" is followed by blue bathed "On The Run", complete with another dose of fog. Subtle-begun "Former Glory" eventually kicks into gear (the lone mellow portion of the evening, from any of the bands!) Prior to "The Front", Cleary asks (rhetorically), "Do you know (Judas Priest's) 'Turbo', well this song was inspired by it". "Fight For Your Life" finale has almost everyone shouting the call & response chorus: "Fight for your life, fight for your freedom." A glorious ending to a fun gig.

On studio recordings, Bewitcher sound like a cleaner enunciated version of the (classic) early ‘80s Cronos led Venom. "Hexenkrieg" even drops a few references, including "Acid Queen". Live, this brand of "satanic speed metal" (their words), not as much, although onstage the trio thrashes like there's no tomorrow. Throughout the exclusively red lit set, singer/guitarist Mateo Von Bewitcher's dreadlocks were bouncing around, like Medusa, looking for a comb. The opening "Too Fast For The Flames" and "Wild Blasphemy" translate best to the live setting.

Get out, see a show and support metal!