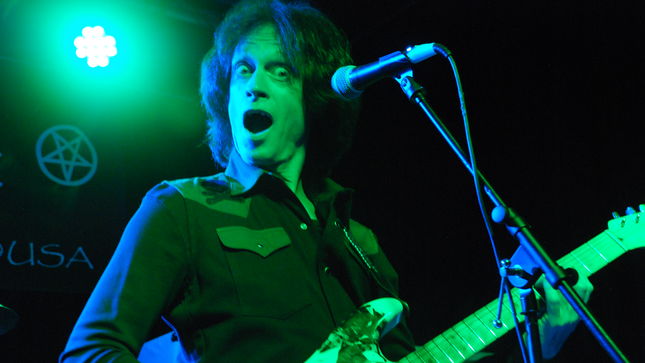 You should remember the band, Yngwie-style shredding guitarist Chris (Impellitteri), and the hit single "Stand In Line" with Graham Bonnet on vocals from 1988. Well, for those unaware, Chris and his band have been making new music since releasing 11 studio albums, with the recent three (including the latest Nature Of The Beast), seeing Rob Rock back on vocals. Over the decades, Impelliterri has done much of their business overseas, especially in Japan where they still draw big crowds. So this club show May 16th, at Dingbatz in New Jersey, was a rare treat.

Joining Chris and Rob are bassist James Amelio Pulli and Patrick Johansson (Yngwie Malmsteen) on drums. The setlist included “Lost In The Rain” from the first EP to “Warrior” and “The Future Is Black” from Answer To The Master,  and two new songs – “Run for Your Life” and “Hypocrisy”. If you also missed the most recent two albums with Rob, title track to Wicked Maiden (2009) and 2015’s Venom (“Face The Enemy”, “We Own The Night”), you will hear Chris never compromised his style or balance between aggression and melody, both in the hooks and his leads. Covers of the popular Russ Ballard hit “Since You've Been Gone” and Chris’ smoking, emotive instrumental of “Somewhere Over The Rainbow”, plus, crushing renditions of Ozzy’s “Crazy Train” and Black Sabbath’s “Symptom Of The Universe”. The sixteen song set was (as Chris told the crowd), a great warmup for their upcoming dates in Japan and a couple summer festivals.