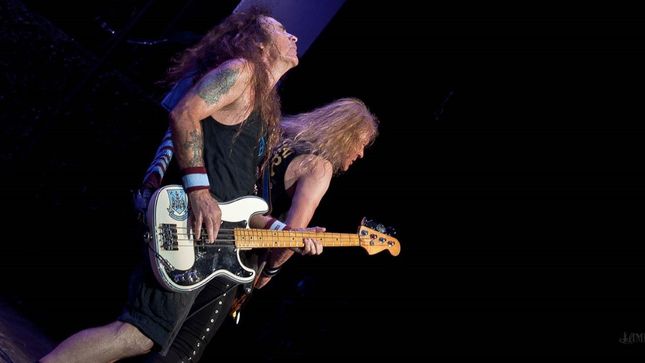 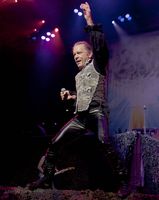 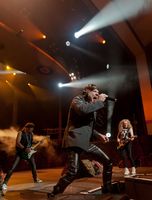 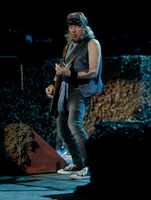 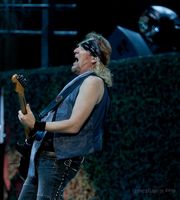 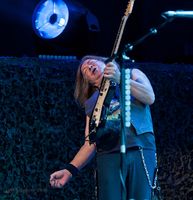 Iron Maiden steamrolled into Riverbend Music Center in Cincinnati for two hours of a metal history lesson. I first saw Maiden in 1984 on the Powerslave tour at the Cincinnati Gardens, now demolished. Maiden were my proverbial metal concert deflowering. Back in 1984 I remember watching the incredible production and thinking it really can’t get better than this. Every succeeding tour I’ve thought the same. As many reading this know Maiden are currently on the Legacy Of The Beast tour. I understand the Legacy Of The Beast tour is based in part on an Iron Maiden game app featuring the many incarnations of Eddie over the years. I’m not a gamer, and still listen to vinyl in my basement (mine, not my parent’s), so I’ll accept that on faith.

The Raven Age opened the show. For those not in the know, The Raven Age features guitarist George Harris, son of Steve Harris. I’ve heard them described as metalcore. Perhaps, but certainly more melodic than typical metalcore. Dressed in black, they played a nine song set that lasted approximately 45 minutes and were allotted a sizeable portion of the stage, taking advantage of every inch of real estate. The pace of their set picked up a little speed midway through their set beginning with “Fleur De Lis”. By the time the set ended with “Angel In Disgrace”, I sensed the crowd was more receptive to their material.

After a little more than half an hour the anticipation was over as “Doctor Doctor” filled the open air Riverbend, house lights still on, and 15,000 heavy metal fans were about to see the largest, most elaborate stage production I’ve seen. Neither I nor any metal head from 1984 could anticipate what was to come in the universe of Iron Maiden. Reliving 1984, they open with “Aces High”. Unlike the Powerslave tour where the entire show was geared to that one release, virtually every song for this show features different backdrops depicting different versions of Eddie. “Aces High” saw Steve Harris, Adrian Smith, Dave Murray, Janick Gers appear from under the riser, with Nicko McBrain perched behind the kit, curiously hidden behind camo netting for the first three songs, eliminating any possibility of photographs, save for his forehead. Bruce Dickinson then sprints from under the riser wearing a fighter pilot’s hat and goggles, and proceeds to belt out it like we were back in 1984, all the while a fighter plane hangs over the stage.

Continuing the theme, cue “Where Eagles Dare”, which I don’t believe I’ve seen them play live and features awesome drum work from Nicko McBrain. It would have been cool to see him from behind the camo on this tune. At that point in the show, Bruce Dickson relocates to the stop of the riser. “2 Minutes to Midnight” follows.

Kudos for including songs from the Blaze Bayley era, including “The Clansman" and "The Sign Of The Cross”. It is a testament to Bruce Dickinson’s vocal talents that he can take a song he did not originally sing and make it his own. Eddie comes on stage during “The Trooper", and then is immortalized in stain glass during “Revelations”. In perhaps a bit of tongue in cheek, for the “Sign Of The Cross”, we see macabre imagery in the center of the backdrop, flanked by Eddie in stained glass. Was there a message here? Bruce takes a leave of absence while Dave Murray, Adrian Smith, and Janick Gers are left to jam.

“Flight Of Icarus”, which has been vacant from the set list the last couple of times I've seen them, re-appears, while the young Greek boy with wax wings now makes a physical appearance over the stage, until, alas, his wings melt and he falls to his demise. Why did they melt? Ignore the book on Greek mythology. It was because Bruce Dickinson was carrying around a portable flame thrower and torched the wax wings.

Dave Murray gets the spotlight for “Iron Maiden”, which is the last song of the set before the encore. “Hallowed Be Thy Name” then brings up a jail cell on the rear riser and a noose hanging from the rafters to add to the drama, while fifteen thousand fans clap in unison on the beat. All the while Bruce is running around the entire show, and with the exception of a little gray, does not show any signs of having aged, either vocally or physically, since 1984. Likewise, Steve Harris, the anchor of the group, runs around, darts to the front of the stage, and back to the other side, all the while singing every lyric as we’ve become accustomed. Dave Murray seems more animated on this tour than I’ve seen him in the past, and is still in lockstep with Adrian Smith. Janick Gers still slings his guitar, and Nicko McBrain is still, for my money, the drummer to beat in metal. Is there another drummer who makes his presence known and felt as much without taking a drum solo to declare his presence? His powerful drumming shines on “Where Eagles Dare”. His delicate cymbal work shines on “Fear Of The Dark” and “Revelations”.

Usually when I think of concerts with major productions, I think of Madonna, Bieber, and their ilk. Too often I believe those productions are designed to hide the thin nature of the music. Maiden’s catalog is deep and strong enough to stand on its own, with or without the production. The music supports the production, not the other way around, and the guys on stage are clearly having fun and enjoying this tour, and so this is a must see show, worthy of a road trip. Maiden has always delivered big bang for the buck, and this tour delivers.

Quibbles? Yea. The show could be three hours long and still be too short. Bruce says they are going back out with new songs and we’ll see him soon. I know fifteen thousand strong in Cincinnati who are looking forward to it.