IRON MAIDEN - Number Of The Beast? #1 In Our Book! 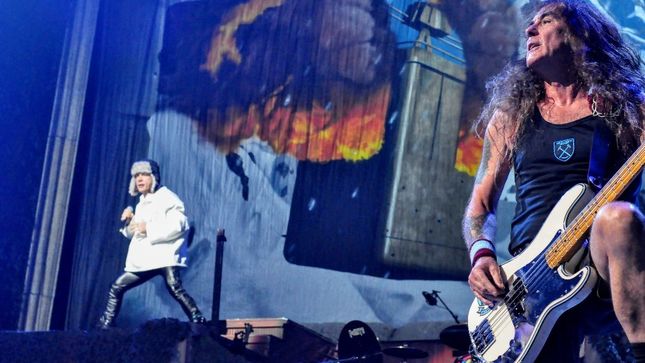 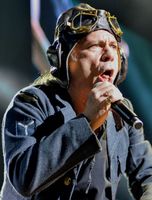 Let him who hath understanding reckon the number of the beast... with humidity, the temperature in the parking lot was over 100 (it is an inhuman number!). Yet, the ever loyal Iron Maiden faithful gathered outside the Wells Fargo Center for the pregame ritual tailgate/BBQ. The Beast was back in Philly!

The video screens show black & white WWII footage of fighter planes, as the voice of Winston Churchill bellows from the speakers. “Aces High” starts amongst a rapture din from the packed venue (can't pick out an empty seat, even in the third tier of the hockey arena). As an inflatable replica of the Spitfire (with rotating propeller!) floats overhead, the boys charge onstage, moments later joined by frontman Bruce Dickinson, with military uniform, leather helmet and goggles. He tears around the stage (like a monkey, according to Maiden's own pre-show handler, giving us photogs a play-by-play description of what we'd see). They hardly act like gents in their 60s, almost in constant motion, one side of the stage, to the other, giving fans, from all vantage points, the opportunity to see their heroes. By now, the positioning is almost as ingrained as a chess board: guitarists Dave Murray and Adrian Smith, stage right, founder/bassist Steve Harris (with foot on wedge monitor) left, but frequently commandeering center stage, and Janick Gers, stage left, who does venture out more, yet seems content to dance/prance/twirl around his little area, often extending one leg onto the side-fill monitor, as he plays. However, was struck by how active Dave Murray was throughout the night. Seems a little bit of Janick's flamboyant stage antics have rubbed off on the often stoic guitarist, as he drops to his knees and adopts off kilter poses, appearing looser and more alive. 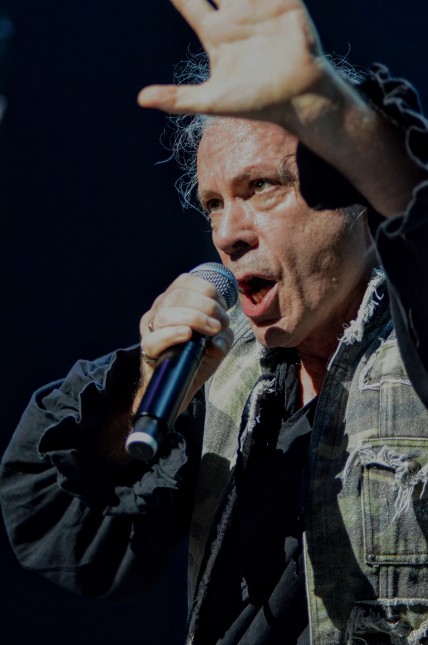 Initially, the stage is covered with camouflage and cargo netting. Drummer Nicko McBrain is “invisible” behind the military draping. Backdrops change virtually on every song. In fact, they often offer a hint as to what comes next (not that most in the crowd don't already know, (re)checking the setlist, on their cell phone, throughout the show). “Where Eagles Dare” sees Dickinson in white Eskimo parka and ear-flap winter hat on the second tier of the stage. It is exclusively his realm, the rest of the band restricted to W shaped deck, below. “2 Minutes To Midnight” sees the singer back, stage front, in denim vest atop black shirt, with shiny black leather pants. He'd add a sword to his wardrobe, for “The Clansman”, directing the crowd to shout “Freedom!” The backdrop sports Eddie, with blue Mel Gibson/Braveheart inspired war paint. Harris employs acoustic bass, mounded on a stand, to begin and end this one.

During “Trooper”, one of the military fatigues attired grunts, who cleared the stage (at the beginning of the concert), hands Bruce the Union Jack. As the British flag is unfurled from the upper deck, the four stringed musicians are bunched together, center stage. Although fans are already singing along, white spots shine into the audience, prompting their participation during the “oh, oh, oh” refrain. Eddie makes his first onstage appearance of the night: 12 foot tall, in red coat (blue pants), with military backpack and sword. He stands nearly eye-to-eye with Bruce, who is on the second tier. In battle, Dickinson, a fencer, in real life, mocks Eddie's sword technique, even ducking between the giant's legs to avoid his wrath. Finally, the singer hoists the Stars & Stripes. Only in a gun obsessed nation could the flag fire a shot to succumb the beast. 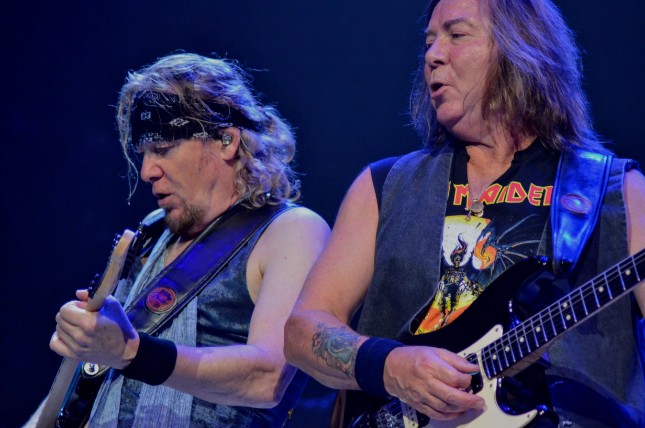 The stage goes black for a few minutes. Sporadic flashing lights and a prerecorded rumbling noise makes sure everyone knows this is a planned part of the show. When the lights go up, it's evident the time was used to rechristen the stage. Gone are any vestments of military accoutrements, replaced by stained glass and the wooden interior of a church. Each pane depicts a different era/album, with Eddie. Four chandeliers have descended from the lighting rig. It's just the four guys onstage, eventually joined by a black robed Dickinson, for “Revelations”. To the fans, McBrain and his kit are clearly visible, for the first time tonight. A rare Gers sighting, center stage, and once the guitar break is complete, Dickinson reclaims the front, twirling a heretofore unseen mic stand.

Steve and Janick are alone, to begin the green lit “For The Greater Good Of God”. The crowd spontaneously claps along and Dickinson, balanced on his wedge monitor perch, conducts the ensemble. When the singer leaves the stage, the other pair off, in familiar couplings: Murray/Smith vs. Harris/Gers, stage opposite. Lively begun “The Wicker Man” sees Smith under a halo of orange lights, a burning effigy of Eddie depicted on the backdrop. Lit in alternating reds and purple, the “Your time will come” chorus is sung by the fans. As the second verse kicks in, Harry charges to stage right. A marching-in-place Gers and Murray stand back-to-back.

For the next tune, fogs spills over the ramparts, as druids, a burning church and victim at the stake are vividly on display, part of the giant painting hanging behind the band. As the lights turn red, a hooded Dickinson brings a crucifix (grave marker?) center stage. McBrain lays down a military cadence snare. Like every good Dracula movie, Bruce wheels around, ripping off the hood, as he moves forward. “Sign Of The Cross” sees four 15 foot flames erupt from the second deck. As the singer walks from one side to the other, cape outstretched, methinks this man must be a Hammer Horror/Christopher Lee fan. After the subdued mid-section, firework explode from the lighting rig, as fog envelopes the floor. Living dangerously, Dickinson goes topside, along with what is now six vertical columns of flame!

Momentary blackout and when they reappear, a giant Icarus is suspended above Dickinson, who loiters on the second deck. The singer is now armed with dual flame throwers of his own, one in each hand. To begin, the mic is in his right, left is on the fire button (literally). But when he holsters the mic, look out! Double-fisted mayhem, as he walks out on the right ramp, firing as he goes. The rest of the band is as far away as possible, congregated at the center stage edge. As the Greek parable unfolds, eight crisscrossing streaks of fire descend from the lighting truss, physically burning through the strings that held the Icarus figure, sending it crashing out of sight, behind the wall/backline. Tale told.

Green lit, another costume change for Bruce: top hat, overcoat, white ruffled shirt and a long nosed, silver mask. He looked like a masquerade Penguin, from the campy ‘60s Batman TV show (and carrying a green lantern?). This time he visits the left, upper tier, during “Fear Of The Dark”. With his urging, the crowd sings the titular chorus. Gers and Harris pogo, the audience follows suit. Before it's conclusion, Dickinson removes the mask, as all sing “whoa whoa”. 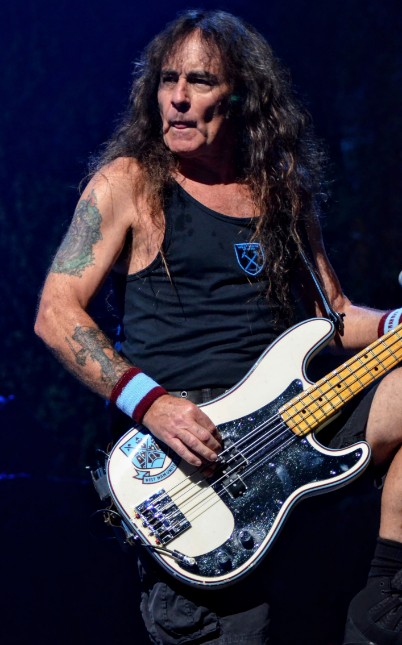 Red lights shine on the audience, as gargoyles appear, mounted on the upper tier, along with four medieval baskets of flames. “Number Of The Beast” has Bruce in basic metal attire, black leather jacket. As if there's insufficient amount of fire already onstage, six additional flames shoot skyward. Murray, Smith and Harris congregate stage right. Seriously, Bruce doesn't need to sing a word, the thousands of voices would carry it home. It ends with Murray again on his right knee, left leg outstretched. Gers spins in a circle, as their signature tune prepares to finish off the proper set. Janick twirls and flips his guitar around his body, neat tricks. The white lights on the crowd reappear, the non-verbal cue to sing along. Like we need the invitation. A mammoth, horned Eddie head rises from behind the wall, a fierce, toothy roar on his countenance. More flames. As it winds down, Gers employs all the visual histrionics: throwing his guitar overhead, spinning it around, held only by the strap, windmilling the Fender by its neck and ultimately tap dancing on the strings. One final blast of fire, but they'll be back. McBrain comes center stage and Frisbees drum heads into the crowd (he'd do the same at the end of the night, where he'd be the last to leave, thanking the fans on the mic).

The encore begins somewhat low key, with “The Evil That Men Do”. Dickinson feigns a zombie walk as he crosses to stage left. He vaults to sitting on the upper deck, using an impromptu entrance, via a suspending pole. He spends the entirety of the pink/purple lit song on the left wing, although he does venture a look down on McBrain. Tolling bell, as deep blue bathed “Hallowed Be Thy Name” commences with Harris clapping hands overhead, as Dickinson delivers the introductory narrative, imprisoned, behind bars, on the upper deck. When it gets into full swing, the lighting gets clearer, with Dickinson singing with his left hand on a suspended noose, which he sets a swingin'. Finally the words so many had come to hear, “Scream for me Philadelphia!” Murray and Gers exchange fiery guitar runs. The true finale, the galloping “Run To The Hills” is a full-on sing-along. Seeming to sense this, the boys are almost in party mode. Gers is on the right, mockingly pretending to add backing vocals, with Murray (neither of whom do vocals). Harris does step up to the mic, while Smith switches to a Flying V.  In his best Monty Python & The Holy Grail pantomime, Dickinson rides an imaginary horse around the upper deck. Iron Maiden are still one of the most entertaining bands (in any genre) on the planet.