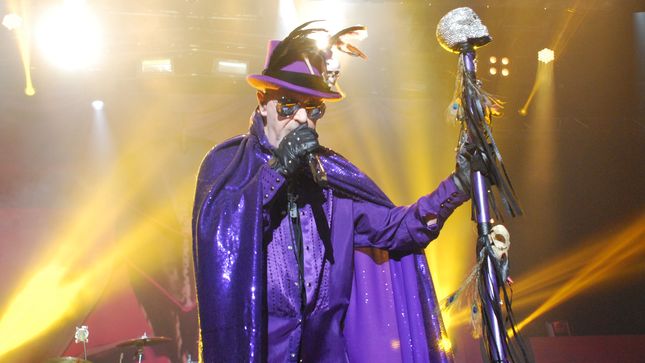 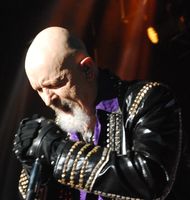 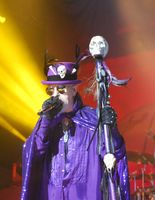 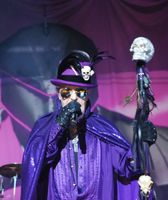 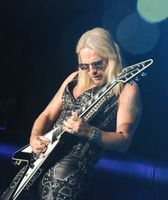 On May 14th, Judas Priest brought the next leg of their Firepower tour to the Paramount Theater in Huntington, New York, with fellow English hard rockers Uriah Heep.

Joining UH original guitarist Mick Box were long time singer Bernie Shaw with Phil Lanzon on keyboards (both since 1986), Russell Gilbrook on drums, and Davey Rimmer. Over the course of nine songs the Heep made good use of the hour set playing new songs amongst other selections from their 50 year career. The two off the latest album Living The Dream – “Grazed By Heaven” and “Take Away My Soul” fit nicely in with their past retaining their classic elements of those Deep Purple-esque keyboards, Bock’s heavy riffs, a solid rock bottom rhythm, and strong melodic vocals (see “Stealin” from the album Sweet Freedom). “Too Scared to Run” and “Between Two Worlds” kept the energy high, while those trademark guitar/bass/keyboard heavy grooves for “Gypsy” and title track to the third album “Look at Yourself” taught the youngsters in the crowd how unique and original the formations of these sounds were in the ‘70s. Closer’s "Sunrise", hit single “Easy Livin”, from the classic 72’ albums The Magician's Birthday and Demons and Wizards had the crowd singing and prepped for the Priest.

It is great to see Judas Priest are one of, if not the only, band to keep switching up half the setlist every tour. Lone original members, singer Rob Halford and bassist Ian Hill still joined by longtime drummer Scott Travis, guitarist Richie Faulkner, Andy Sneap for the tour, still bringing the firepower! With the Metal God dressed in purple shirt/cape and hat with skull bejeweled staff for “Necromancer”, it’s a one, two, three punch followed epic “The Sentinel”, and feel good “Heading Out to the Highway”. Video screen behind the drum kit flash images for “Spectre”, followed by radio rocker “(Take These) Chains”, a goodie dusted off for this run. Backdrop for the album Angel of Retribution displayed for “Judas Is Rising”, but second nugget of the night – “Out In The Cold” with those cool blue and green lights complimenting the celestial images on the video screen was another highlight. How’s Halford’s voice?, I don’t how he does it at almost 70, strong and confident in his mid-range, hits the highs when need be, and a couple times goes low too for added effect.

Two more from the new album Firepower, “Traitors Gate" works well in the set with “Halls Of Valhalla” (off Redeemer Of Souls), seeing Faulkner and Sneap trading off leads and harmonizing. And "No Surrender” just electrified the venue and has become another singalong anthem. Sandwiched in between is the return of “Starbreaker”, love the driving “Steeler”, and the title track to the album Killing Machine after a few decades. So yes, it was refreshing not to hear the same old “Turbo Lover”, “The Green Manalishi”, “You’ve Got Another Thing Comin”, “Electric Eye”, “Metal Gods”, or “Painkiller”. “Victim Of Changes”, “Hell Bent for Leather”, “Breaking The Law” and “Living After Midnight” (both without Glenn Tipton), the only usual suspects. Oh, and “All Guns Blazing”…wow, again I am blown away how Richie Faulkner just kills it = mind blown!