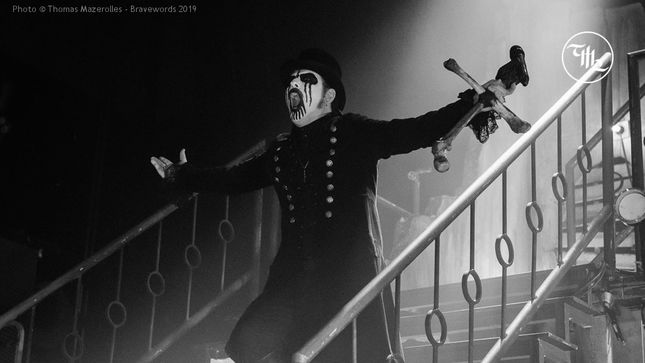 After a five-year wait, King Diamond returned to Montreal, even if this coincided with the first snow fall of the season, fans were gathered in masses to see him as well as Uncle Acid And The Deadbeats and Idle Hands.

The night started with the band Idle Hands and the songs from their recent album. Some might think that the signer Gabriel Franco is trying to be another Joey Ramone, but that being said, his deep vocals melodies are very catchy even if they lack confidence at times. Their mix of Goth and traditional metal is very energetic, but it does not seem to get the crowd going. It was the band’s first time in the city, and fans only had eyes for their lead guitar player Sebastian Silva. He might not have been born to experience the 80’s music scene, but he is definitely living it with his long puffy hair, his sunglasses and long coat. He has the attitude and the hands to back up his looks as well and one could think of him as a young Yngwie. He is also the one with the most experience on stage, and he does not hesitate to interact with the fans as much as possible. He was worth watching even if you did not like their music. As expected, the band played almost half of their only album called Mana and a few songs from their EP Don't Waste Your Time. It will be very pleasant to see this band again when they have more shows under their belts.

The band Uncle Acid And The Deadbeats played here earlier this year and the fans are eager to see them again. Their mix of stoner, doom and psychedelic music gets the crowd going immediately. The huge backdrop where weird images are projected to help visualize their music is a nice addition on the visual side of their show because the signer Kevin R. Starrs is not very dynamic on stage. He rarely moves very far from him microphone as he seems to be reading the lyrics of most of the songs. His vocals could also be a little louder as they were buried by the music during a few songs. The fans only had eyes for one musician, this time it was for their bass player Justin Smith as he was constantly on the move and always interacting with the fans. He is really a joy to watch on stage and he does all those crazy things with a huge smile on his face!

It is now the moment that everyone is waiting for as King Diamond appears on a stretcher on this three-tier stage designed as a mental institute. The crowd goes wild as soon as the band kicks it in gear with the songs “The Candle” and “Behind These Walls”. As usual, King Diamond is very charismatic and his vocals are spot on. Andy, Mike and Pontus are also very dynamic on stage and complete King’s presentation very well. Livia Zita is once again doing backing vocals on this tour and can be seen on the balcony, but sadly, she does not move from there and does not really interact with any of the musicians. Jodi Zachia is the one doing all the storytelling that is linked to the music and that interacts with King Diamond as Grandma, Abigail, Miriam or Lula in order to bring all the stories to life. As for the music, the band played mostly old songs taken from their first five albums. The only new song was “Masquerade Of Madness”. As expected, “A Mansion in Darkness”, “Halloween” and “Welcome Home” were very electrifying and got the crow going. “Voodoo”, “Behind These Walls” and “The Lake” were also a nice surprise but “Sleepless Nights” gave goosebumps to everyone. The band came back for the encore with the songs “Burn” and “Black Horsemen”, which was dedicated to the recently departed Timi Hansen.

King Diamond’s music is not for everyone, but his theatrical show is a must for any music fan. We can now only hope that he will be back once his new album is out, or perhaps he will surprise us with a Mercyful Fate reunion show!