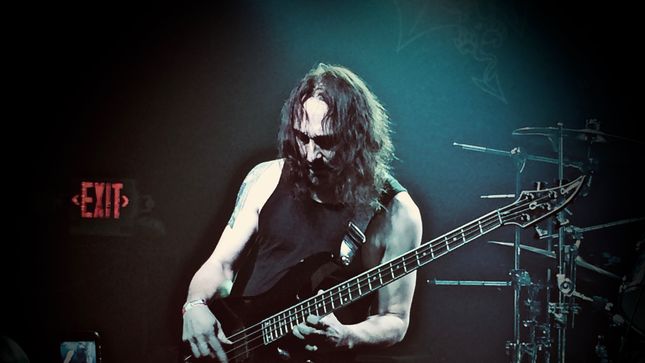 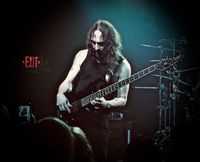 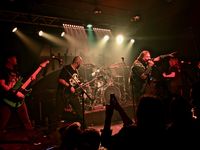 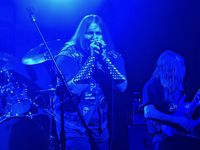 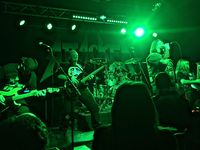 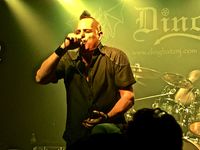 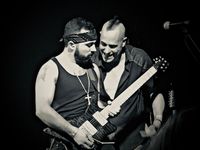 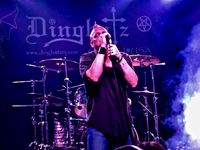 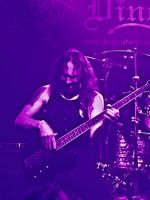 An early winter was cut dead in its tracks at the winter solstice with some not-so-abnormal rising temperatures. This string of fortunate events led this Atlantic Canadian Canucklehead to get to my motor-horse and ride to Clifton, NJ for a one of a kind metal show at the local favourite music venue comically called Dingbatz.

With a gothic look on the outside and a cavernous look on the inside (a look that also invokes the crypt of a Scottish castle), and also quick to dispense your favourite cocktail, this was the perfect setting for Mike LePond, the bass wizard of progressive metal giants Symphony X, and his Silent Assassins to go from studio project to full on live band with a packed house of diehard fans from (surprisingly) many corners of the country and even different parts of the world. Metalheads gathered from California, Arizona, Pennsylvania, Tennessee, West Virginia to mingle with the New-York Tri-State crowd along myself as the lone Canadian, the Spanish merch girl and a Japanese blogger to collectively raise hell as headbangers this holiday season! Playing a setlist comprised of heavy hitters from the band’s two studio releases, Mike LePond’s Silent Assassins were joined by New-Jersey legends Attacker and Pennsylvania power metallers Power Theory.

While initially not my cup of tea upon the first listen, Power Theory started to win me over by the end of their set. With every passing song, I noticed the band playing tighter, the crowd getting louder and everything overall sounding fuller than what I initially perceived. I was most impressed by their new vocalist Jim Rutherford (which is a no brainer for me as I sing too) who displayed a lot of power, some versatility and simply had a great sound to call his own. While I’m confident that we’ll cross paths again, it is a little shameful on my part to want more from Power Theory just when their set had ended. I mean seriously, was I NOT listening to begin with? Moving forward…

Attacker really kicked the night into high gear as their diehard fans came out in numbers to support this veteran act playing on their home turf. Their onslaught of traditional metal practically got the entire room head banging as one. Obvious comparisons can be made with acts such as Helstar, Riot and Jag Panzer, but these guys bring a more raw, stripped down and gritty approach to things. A veritable riff-o-rama while keeping the rhythm tight and ripping solos left and right, Attacker were truly living up to their name. Speaking of which, Bobby “Leather Lungs” Lucas was doing just that going from grimy aggressive vocals to full on high pitch screams that make the hairs on every metalhead’s arms stand up. There were many moments where I could pick up vocal passages that would remind me of Geoff Tate, James Rivera, Warrel Dane and Harry “The Tyrant” Conklin. Suffice to say that I became a fan of Attacker that very night. And so it has come to this: Mike LePond’s Silent Assassins were about to hit the stage. I had a real concern in my mind about how the Silent Assassins material would come across in the live setting as the drums (done by none other than Symphony X main man Michael Romeo) were programmed. My concern was rather short lived as guitarist Lance Barnewold and drummer Dan Prestup began ripping through set opener “Apocalypse Rider” with ease and confidence. In the space of literally a few seconds the collective of the room was assuaged, and then people began whipping themselves into a frenzy. I could once again feel the hairs on my arms, knowing that we were in for a real treat. The icing on the cake was the full belt delivery of vocalist Alan Tecchio (a pleasing Matt Barlow quality to his voice is clearly present), who stepped into the moment and made his presence felt. Something special was attained as it all sounded JUST AS IT WAS RECORDED! I was on cloud nine and didn’t want to leave. The band kept the intensity up with hard rockers like “Black Legend”, “Hordes Of Fire” and “Avengers Of Eden” while bassist Mike LePond also conjured up his own black magic through tracks like “The Outsider” and “The Quest”. Though not the centerpiece of the show (nor in metal in general), keyboardist Tony Stahl proved to be a valuable component, particularly during the set’s most important “mood changing” songs. “I Am The Bull” was easily the most crushing and sinister track that relied heavily on Stahl’s atmospheric keyboards to complement LePond’s intense bass noodling. It’s diametric opposite, “The Mulberry Tree”, required light and fleeting accents to compliment the sing-along lyrics to serve perhaps the only moment of the night where metalheads caught themselves dancing instead of headbanging. Ending the night on the right note called for namesake “Silent Assassins”, resurrected Seven Witches sing-along “Ragnarok” and the thrasher “Masters Of The Hall” that has a particularly tasty and epic finish that served as the perfect closure for the evening. Mike, Alan, Lance, Tony and Dan can be proud of one thing: in one night, they transformed from a studio project into an actual band and captured the imagination of everyone who came to see them play.

This is officially the 15th year in which I’ve been checking out shows and I can honestly say that this one, along with no more than 3 others, truly delivered on all the excitement and exceeded expectations on many levels. I was a stranger walking in a strange land, literally 650 miles away from home in a room filed with strangers. What united us all in that room was heavy metal, and not for a single moment did I feel out of place or alone. I was exactly where I needed to be.