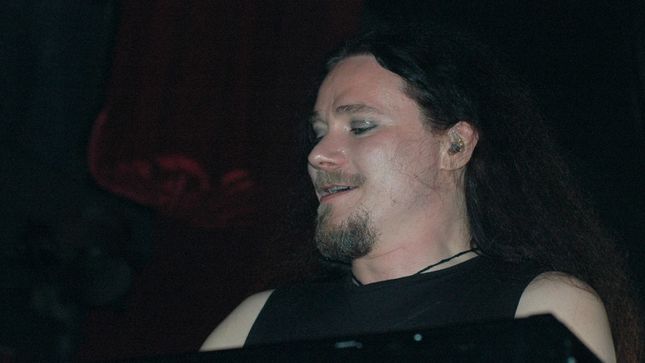 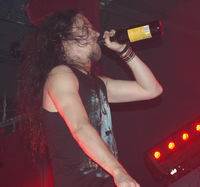 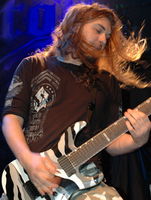 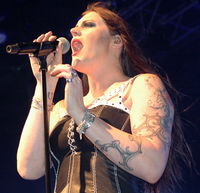 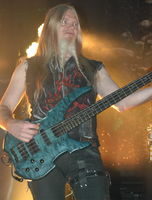 Final night of the North American tour was held at the Fillmore, in Silver Spring, Maryland, a suburb of Washington DC. As such, it was not your typical black shirted metalheads-only crowd, a new generation of Washington house wives amongst the soccer moms and sports jacket/blazer wearing dads in attendance, minus their kids. Odd seeing a woman in form fitting, floor length sheath dress, headbanging, jumping up and down and throwing her fist in the air. More power to you girl! It was a sold out show, which allowed the band to sign the backstage Wall of Fame (restricted only to those artists who achieve a sell-out, each cinderblock painted a different neon color, emblazoned with the band's name and date of show.

Sabaton opened. As usual, the Swedish pagans juggled the line-up,changing the set from when I saw them in Philly, on the second night of this current run. The rousing 'Ghost Division' sees the band enter, run around like a schizophrenic track meet, led by Joakim Brodén, mirrored shades, steel plated flak jacket and bald/Mohawk head all reflecting the plentiful lights. 'To Hell And Back' still held the #2 position on the roster, but in place of 'Soldier Of 3 Armies', Maryland got 'Carolus Rex' (moved higher in the running order) instead. Afterward, Brodén addressed the audience for the first time, saying "We have some different songs for us to play tonight," pausing to read the setlist printed at his feet, "the Village People, Stevie Wonder..." cue laughter from the crowd. Instantly the band break into a few bars of Iron Maiden's 'Run To The Hills'. He continued, "Looks like no YMCA (the Village People hit) today." People started to boo! "You're booing that we're NOT playing 'YMCA," the singer asked, somewhat dumbfounded. To obliged, he got the crowd to sing the chorus, with brief musical accompaniment and the rugged, military dressed frontman, arms forming a Y overhead.

Returning to normal fare, it was 'Swedish Pagans', the four camouflaged musicos across the front of the stage. Even drummer Hannes van Dahl was practically included, his kit being set on the floor, so close to the front. Next comes a little levity, with the singer joking about his guitar prowess, demonstrating a ham-fisted rendition of 'Smoke On the Water', widely acknowledged on of the easiest songs to learn. Funny enough, the guy really can play (as demonstrated onstage, in Germany, a few years back), but THAT joke has yet to be revealed Stateside. After telling a Michael Jackson joke, "You made that dirty," he reprimands the gathering, it was the almost folk metal melodies of 'Resist & Bite', the second of three Heroes tracks aired this evening. The prerecorded intro to 'Art Of War' sees the drummer left alone onstage. The two guitarists meet (for the first time) in the center, as bearded bassist/founder Pär Sundström ventures to the left and Brodén offstage. The audience sings the titular chorus without any prompting.

As the song ends, the stage is black, apart from the backdrop, highlighted in blue, as sirens (pun intended) herald the arrival of 'Night Witches', bumped towards the end of the set, as opposed to earlier this tour. This one might be too heavy for those suburbanites seated at the tables in the balcony, not really rock people, judging from the lack of reaction. 'Primo Victoria' sees everyone onstage pogoing up and down. OK, not van Dahl. and 'Metal Crue', essentially a sped up Bon Jovi melody playfully stringing together band names as lyrics, sees the drummer twirling his sticks and the singer have ditched his omnipresent sunglasses. The fans clap along, which leads into a drum roll and finally, the ending applause, a snippet of the 'Star Spangled Banner', as Brodén says, "Thank you America". Feels so right in Washington DC, and just for good measure, they take their bows as 'In The Navy', by The Village People, blares from the house sound system. See you next time guys!

Maybe it's just the height of the stage, but Tuomas Holopainen's keyboard bunker (3 sets of ivories and a well disguised wine bottle) seems lower, allowing the Nightwish founder more facetime with his (shrieking/adoring) fanbase. Like their Swedish touring partners, the Finns have made some surprising changes to the show in the five weeks since we last met. Most notably, the absence of fans favorites 'Nemo', the rollicking Celtic-laced 'I Want My Tears Back' and the title track from their new album, Endless Form Most Beautiful. Glad to hear 'Alpenglow' and the old school 'Dark Chest Of Wonders' in their place!

A pair of newbies, 'Shudder before The Beautiful' and 'Yours Is An Empty Hope' kick things off, the tightly packed room already rabid from the lengthy intro. Not sure Holopainen ever envisioned anyone stage diving to his latest creations, but almost immediately, the photographers were bombarded with human projectiles (and not just kids). During the green lit 'She Is My Sin' (Yes, more oldies!) guitarist Emppu Vuorinen visits the wings, behind the keyboardist, to the squealing delight of the ladies standing perpendicular to the stage. Meanwhile a short haired middle-age man, leaning on the photo pit barricade, bops his head in time to the music.

Marco Hietala, the man with a two-prong beard, now sports a double bass. He made a short end of the tour speech, thanking all the crew involved, including the lighting guys, who is retiring after many years of service to the band. Odd seeing people applaud the mention of bus driver and the like, folks they never met, but the four-stringer (who has apparently taken up vaping, at least indoors, rather than his customary cigarettes) offered his parting advice, "Be like Charlie Sheen. Tell the boss to fuck off, then come back!" 'Dark Chest Of Wonders' got a huge response, a storm of purple strobes flashing away as singer Floor Jansen danced around.

When it ended, piper Troy Donockley appeared and addressed the crowd. Pink lights greet 'My Walden' and as Jansen return to the stage, Emppu and Troy share a water bottle. The guitarist, palms pressed together, bow to the Englishman, like a humble servant. Hietala unveils his 'two-headed baby" for the first time, steel blue lights as the penny whistle cuts through the subdued electrified din. 'The Islander' sees Marco alone, under a white spotlight, but unlike early in the tour, there's no seat for the old man (haha!), who only has to sing the first part, prodding the paying guests to do the rest. After the second chorus, the band comes back onstage, Floor adding her hushed counterpoint.

The backdrop is changed to blue space pods for a pink/purple 'Elan', Emppu charging Tuomas's bunker, like an infantry soldier into a bulkhead. The voice of controversial author/scientist Richard Dawkins introduces 'Weak Fantasy' which sees Donockley trading his bag of tricks for a mandolin. White lights pulsate across the width of the stage. Under aqua lighting, the ever present Emppu sidles into the crevice in front of Tuomas to give a pick to (I'm guessing a female) fan. Holopainen headbangs wildly behind his (Tony) banks of keyboards.

He was loose and smiling (Perhaps just the weight of touring almost lifted, then again maybe actually having a good time. Is that possible?), as the bombastic flashing lights began 'Storytime'. Floor works her way over to Tuomas (for the only time), playing to the crowd in the balconies. Only the keyboardist, guitarist and drummer Kai Hahto were onstage to start '7 Days To The Wolves', in a sea of deep reds, blue and all white. When the remaining members stroll on, Troy was still on mandolin. It ended with Marco and Floor belting out the lyrics under blue hues.

Loved hearing 'Alpenglow', although there was little recognition, most nervously clapping along, lest someone call them out o their lack of Nightwish knowledge. No such problems with 'Stargazers'. Off the setlist for more than 10 years, the green/blue lights saw Floor pinwheeling her hair and Emppu relishing the chance to really play some serious guitar. Jansen channeled Tarja Turunen's original timbre, without venturing into pure classical territory. The exaggerated ending of "Sleeping Sun', with pipes, leads into a portion of the 24 minute 'The Greatest Show On Earth', with another voiceover. The green lit beginning sounds like something from Jurassic Park, then it was flash bang white strobes. At one point, Jansen sips a water bottle from the drum riser, as Tuomas utilizes just one finger on the keys. Towards the end, members of Delain and Sabaton suddenly storm the stage, with friends/crew in tow. The Sabaton drummer was in drag, dolled up like Jansen (whom he was chummy with, backstage). End of the tour ritual complete, everyone left the stage together. Actually, that was just the public side of the joke, as backstage, Sabaton had completely emptied the catering area. Like the Grinch, they swept the room clean, taking EVERYTHING:food/drinks, tables and chairs! Nice.

For the encore, Nightwish returned alone, for "Ghost Love Score'. Emppu and Tuomas are side-by-side early on and briefly, there's no musicians, just recorded music. Interesting that Holopainen's keyboards are all at different angles. Would think he'd prefer a specific comfort zone, but no. More individual shoutouts for the crew, then Marco said, "All this interesting pounding on your butt cheeks, would you like to be punished?" Cue 'Last Ride Of The Day', pretty much a victory lap. Over another voiceover, the band returns for final bows, with Tuomas the last to leave, blowing kisses. The Finns will be back early in 2016.

Sabaton were off to the Rock On The Range festival, in Columbus, Ohio, while Nightwish were set to fly home the next day, so Tuomas and Emppu high tailed it to the hotel before the backstage party started. It was a subdued affair, members of each band mingling, sharing a few drinks with fans lucky enough to have been invited into the inner sanctum and being entertained by Troy's slight of hand card tricks. The guy has some world class tricks and his accent adds to the storytelling. Like the band he plays for, top notch.