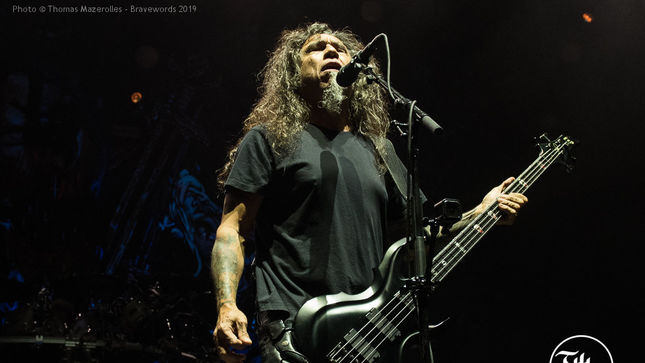 Legendary thrashers Slayer bid their farewell to Ottawa May 22nd and were accompanied by Cannibal Corpse, Amon Amarth and Lamb Of God.

Fans were still getting in the Canadian Tire Center when Cannibal Corpse started playing their intense music that got people moshing instantly. Even if many thought their set was much too short, the band gave their usual punishing performance, although it was a shame that the early start meant that many missed their performance.

There was now a big crowd for Amon Amarth’s first show in Ottawa. The band - with their mighty drakkar on the stage - caused a major reaction by fans who moshed merrily and sang along with frontman Johan Hegg as the Vikings support their 11th full-length album, Berserker.

Up next on this unmatched bill was Lamb Of God, featuring Art Cruz who is replacing Chris Adler and he did not miss a beat, turning into a killing machine behind the drums. As usual, Randy asked the crowd to make a giant circle pit during the song “Redneck” and he seemed very pleased with Ottawa's relentless energy. Once again, Lamb of God did not disappoint.

It was now time for the legendary band Slayer to take the stage and the fans were eagerly awaiting the fall of the curtain placed in front of the stage. They all pushed each other at the same time as the band started playing and basically never stopped. Gary Holt and Kerry King were very dynamic and the visual effects composed of light and flames were spectacular. Fans sang along with Tom during the whole show that was focused on songs from Seasons In The Abyss.

Surprisingly, there were not too many crowd surfers during their set, but that was easily explained because they were only allowed to surf once and were kicked out if they were caught doing it a second time. As usual, the show ended with the classic “Angel Of Death” and after the band members thanked the crowd and left the stage, Tom Araya was left alone to savor the crowd cheering and screaming his name. He moved from side to side and only smiled as fans did not want this night to end. Slayer gave another wonderful show that will be remembered by fans for eternity.