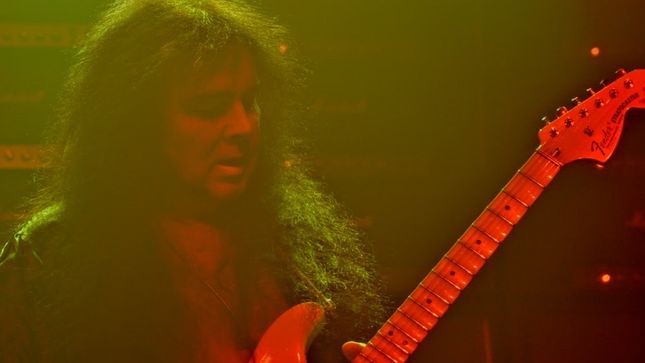 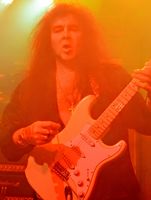 Can recall the excitement of hearing the young (Hell, he's the same age as me) Swede's solo on Steeler's "Hot On Your Heels". After that, sought out bootleg tapes and everything else with his telltale "Yngwie J. Malmsteen" handle on it. Really have you ever heard of, let alone met, another person named Yngwie? Those initial albums, infused with blazing neo-classical fretwork, were truly game changing. Even went to Bratz, a mid-‘80s under-age, non-drinking establishment (that only lasted a year) to see the guy perform! Metalheads couldn't get enough Yngwie. Then somewhere along the line, he became viewed as something of as a bad joke: tales of boozy excess, high profile accounts of rampant ego and inability (unwillingness) to keep a line-up together, going through a myriad of top notch singers. Yet, through all that, in a 35 year solo career, the man continues to release music that inspires musicians and garners new fans, the world over.

Despite new music every few years, live gigs in North America are a bit of a rarity. In fact, the last time I reviewed one of his live shows was over a decade ago, when Tim 'Ripper' Owens was still a fresh face in the band. On record, the guitarist now pulls double duty, by his own insistence, guitar AND vocals, although at live shows, most of the lyrics are forthcoming from the bassist and/or the keyboard player. Truth be told, only a few of the offerings had ANY vocals, most of the night being an instrumental showcase. An 8-foot backline wall of Marshalls leaves little doubt as to where Mr. Malmsteen's allegiance lies: 35 heads and a dozen cabinets, some powered, others in reserve. Prior to appearing onstage, the entire bar is filled with fog, courtesy of an overzealous smoke machine (explains the handwritten "Fuk Ur Smoke" sticker attached to the device. We're talking proverbial London, pea soup, cut it with a knife, coating of fog. Asthmatics be damned! In a bit of pre-game hilarity, as the bass player was tasked with affixing the 8-page setlist to the edge of the stage (printed in a font big enough to be seen from outer space, or at least through the man-made haze at their feet). Every few seconds, the fog machine sent its mist and the still-to-be-taped-down papers scurrying in all directions. Quite funny, in a Peter Sellers/Inspector Clouseau sort of way. The combination of mist and purple/red lights also helps confound digital cameras, Yngwie never being a big fan of the press.

Initially Yngwie blows the dust out of the speakers, launching into "Rising Force", punting guitar picks into the crowd, as he goes. Dressed in black leather and boots, shirt open to his navel (crucifix dangling from his neck), he looks fit, and more importantly: happy, a smile crossing his face at several points throughout the night. He's still got the mane and mutton chops. He commands more than half the stage, bass, keyboards and drum relegated to just a third of the local band sized stage (this show REALLY should have been housed somewhere else, not the predominantly table & chairs, seated supper club atmosphere, but I digress). Even slow ballads, ala “Like An Angel (For April)” are embellished with more notes than some bands' entire performance. Most in attendance seemed to be there for the ‘80s material, stuff off Marching Out, Rising Force, Trilogy, etc. and the classical reworkings. Like everyone else, once the maestro got into the arpeggios, the band stood around watching too. He brought out all the stage moves for "Far Beyond The Sun" (which segued into "The Star Spangled banner (USA's national anthem, made famous by Hendrix at Woodstock): over the shoulder, around the body, guitar swing, dropping to his knees... the crowd loved it. There were pre-programmed accompaniment, at points, as on the keyboardist sung "Seventh Sign".

During "Overture", Malmsteen plays, then stops, the audience yells their approval and he proceeds. The mix of rock and orchestral music is not boring, nor is it noise, playing along to the sped up classical pieces. Know he idolized Ritchie Blackmore, but playing "Smoke On The Water" (with ample visual enhancement, onstage)? Supposedly a song so easy, it's the first attempted by those learning rock guitar, so was this an homage or a slight? Does anyone play more notes, faster, from the lowest end of the fretboard? His solo begins with a horizontal flip/spin of the cream colored Strat, then rubbed across his bum and finally raking the strings across the edge of one of the dormant Marshall heads. He tosses his prized guitar blindly overhead, to a waiting attendant (don't drop it, if you value your employment!) and Yngwie leaves the stage. Scheduled pee break? No, a drum solo. OK, the young kid behind the kit looks like an unassuming guy (and probably hired cheap), but he's not worthy of a solo spotlight (however short). The main man returns for keyboard led "You Don't Remember, I'll Never Forget", to close out the proper set, with crowd clapping along and/or singing the titular chorus.

Short disappearing act, as the fans chant his name. In the time off stage, the smoke machine again fills the room (back to pre-gig conditions). Only its operator is doing more work than Yngwie. The encore begins. The guitarist has his electric guitar slung over his back, headstock pointed to the ground, as he plays a pole-mounted acoustic, reintroducing himself to the crowd. Even the drunk surely still remembers who's onstage. His fingers fly just as fast as with the electric variety. A new, hefty shroud of fog nearly disguises the full band's return, smoke rising from the deck for "Black Star". Is there such a thing as mid-tempo shred? If so, this is it. There is softness and subtleties within, for which he never gets credited. "I'll See the Light Tonight" fittingly closes the show.

Know the guy is trying to make a living, but the $110 signed vinyl and $430 meet & greet seem a little standoffish to fans. There were also a trio of autographed Ferrari steering wheels (from his personal vehicles, although no Ferrari logo included), priced at $1500, $1800 and $2000 apiece.

Highly entertaining. If you're like me and had forgotten how much fun the songs and antics are, rediscover the wonders of Yngwie J. Malmsteen.