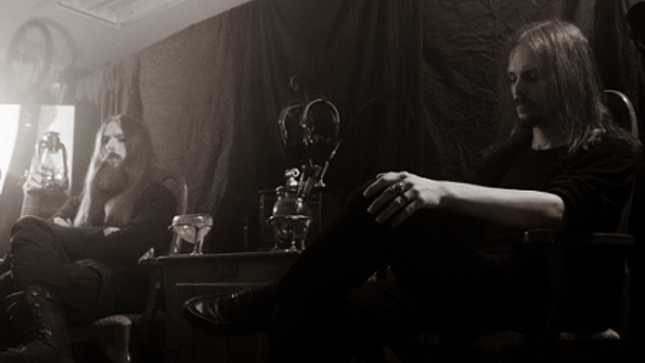 “Our objective with this record is to provide a modern and stylized reinterpretation of Shostakovich’s compositional masterpiece,” Douaumont’s Andy Meyer and Matt Wees say. “Focusing on the attempt to retain the same gravity as it did in the 1960s when Shostakovich was left alone, weeping, having just heard the Borodin Quartet give him a private reading of his work.”

A video for “Largo” from DSCH: String Quartet No. 8 can be seen below.

While caught in the middle of the emerging Soviet regime, Shostakovich found himself contemplating heavy and abstract principles of life through his compositions - most clearly seen in works not infected by the influence of his corrupt government. This can be morally and philosophically reflected in the present as groups are still actively fighting for basic human rights and equalities.

“Inspiration found us in this respect most recently with the large-scale movements in our home state of Minnesota,” says the band. “There is much to be said about the egregiousness in our current political structure, and much that can be disgraced about certain individuals who thrive on the toxic global pedestal. Sound and art are a non-optional resource to use while expressing and existing through periods of change, uncertainty, and the cruelties along our timelines. It is our hope with this record, as all others, to inspire the same thoughts and reflections we used in creating it.”

Douaumont was born of Meyer and Wees’ passion to create a new project under their Pale Noise label – one with more immediate composition and aesthetic world-building, as opposed to their death metal inspired Rictus project. Given a desire to further explore Meyer’s seven string bass, Douaumont effectively replaces the role that a guitar has in most modern metal outfits.

“Douaumont exists in a constant state of immediate reflection on moments through life,” the duo explains. “While this could be said about all of our projects, Douaumont aims to create a sharper image of a shorter window in time, and there is no preconception as to what a Dou release will sound like before going into pre-production. Experimentation has been present in our workflow since we started working together in 2014, but never so aesthetically grounded/accessible while still being able to effectively do whatever we want to like in Douaumont.”

DSCH: String Quartet No. 8 still follows this model of experimentation, but also attempts to capture the feeling Meyer and Wees experienced while listening to and studying the original work. “This string quartet piece is often referred to as ‘the metal string quartet’ by a lot of people even outside the genre, and the goal here was to really MAKE it that,” the band says.