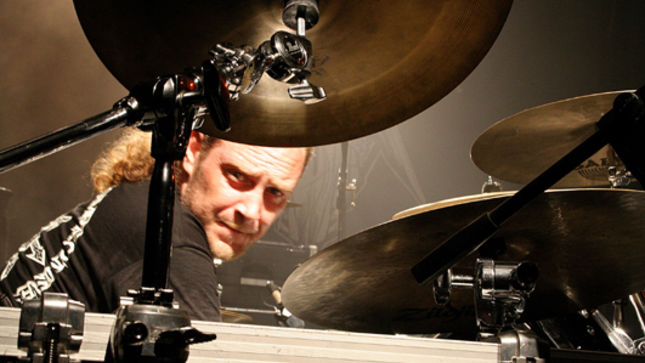 On March 7th, British extreme metal legends Bolt Thrower issued the following statement in memory of late drummer drummer Martin "Kiddie" Kearns who passed away unexpectedly at the age of 38 in September 2015:

"Today would have been Kiddie’s 40th Birthday, it’s a day of sadness, but also of great memories, and we hope you’ll join us and raise a glass to an absent friend.

But sadly due to various circumstances, Kiddie only ever got to release 2 albums with Bolt Thrower, despite being in the band for 20 years and playing hundreds of shows, and we owe his unswerving loyalty and drumming legacy so much more.

This is a debt we’ll start to pay off soon...

Here’s to you Kiddie!"


The Best Of Bolt Thrower, a brand new compilation album, is available now from Earache Records on CD and digital download.

Formed in 1986 in Coventry, England, Bolt Throwerearned the support of legendary BBC Radio DJ John Peel and enjoyed a long and successful career touring the world before officially disbanding in September following the unexpected passing of drummer Martin Kearns a year earlier.

The Best Of Bolt Thrower is a fitting introduction to the band for newcomers and a must-have collection for any diehard fan. The album features 12 tracks, charting the development of the band from their early punk-influenced recordings through to the more death metal approach of their later albums.

Get The Best Of Bolt Thrower now on CD in Europe here, or in North America at this location. The album is also available now on iTunes.

“Cenotaph”
“Through The Eye Of Terror”
“Lest We Forget”
“Spearhead”
“Destructive Infinity”
“The IVth Crusade”
“...For Victory”
“World Eater”
“Where Next To Conquer”
“The Shreds Of Sanity”
“Forever Fallen”
“Armageddon Bound”