BOMBUS Launch Music Video For "(You Are All Just) Human Beings" 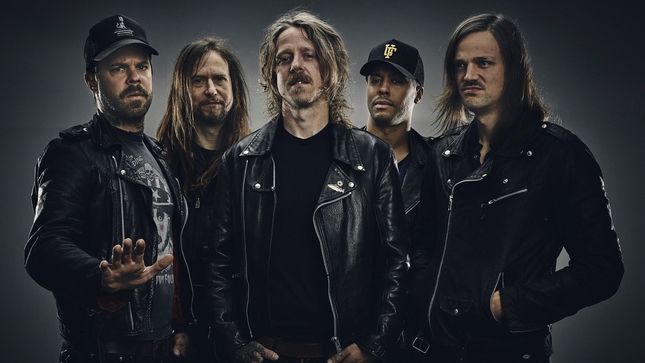 The band have released a video for the song "(You Are All Just) Human Beings", which can be found below.

As civilisation crumbles, everyone needs to find a good party at the end of the world. Loud, proud, bombastic and belligerent, Swedish metal crew Bombus have been raging against the dying of mankind’s light for the last decade, a consistent and reliable force for massive riffs and even bigger choruses, wielding enough fire and fury to power a fleet of Death Stars.

“I think there is really no other band that sounds like us,” says Fredrik “Feffe” Berglund. “But still we sound like a hundred other bands! If you listen to Vulture Culture you can spot the obvious connection to Black Sabbath and Motörhead but if you listen again you’ll hear traces of Queen, The Prodigy, Tragedy, Pink Floyd, The Partisans, Pantera, ABBA... and it all fits in there! We have never fitted into any particular genre or box and maybe that has made us fall between chairs at times, but if you ask me, that’s what makes us special.”

"(You Are All Just) Human Beings" video: