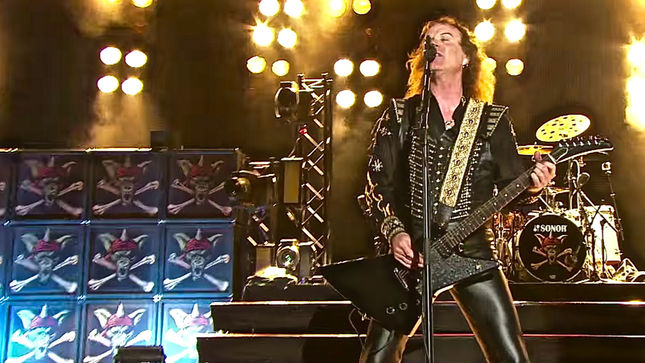 Good things come to those who wait: three years after the release of Resilient (2013), the original pirate metallers Running Wild released Rapid Foray in August!

“The new tracks are more complex than those on our previous two releases,” mastermind Rolf Kasparek remarked, “which I noticed in particular when we were recording the guitars. At the same time some of the numbers remind me of Running Wild classics. I feel that we’ve come up with a very interesting and impressive mix.”

Rapid Foray was produced by Rolf Kasparek with Niki Nowy as sound engineer, who also mixed and mastered the material together. The cover artwork is based on a photo by Kasparek which Jens Reinhold (Virgin Steele, Freedom Call, among others) subsequently gave the look of an oil painting.

In his review, Mark Gromen wrote:

Yes. Now this is more like it! Hamburg is the third busiest port in Europe, so tales of the open seas make sense. While Rock n Rolf Kasparek has gradually rounded his reactivated band of pirates into shipshape (dipping his toes in the water w/ 2012's Shadowmaker and taking a bigger plunge, on Resilient,a year later), this is lively and exciting, recalling classic late ‘80s Running Wild. That's not to say it's a carbon copy, though. The opening pair, “Black Skies Red Flag” and especially the speedy “Warmongers” (easily his best song in more than two decades) launch a shot across the bow, signaling this batch of eleven mead-swilling anthems are more than mere cannon fodder. “Stick To Your Guns” is a mid-tempo, Teutonic metal stomp. Can practically see the head shakes and synchronized stage moves.