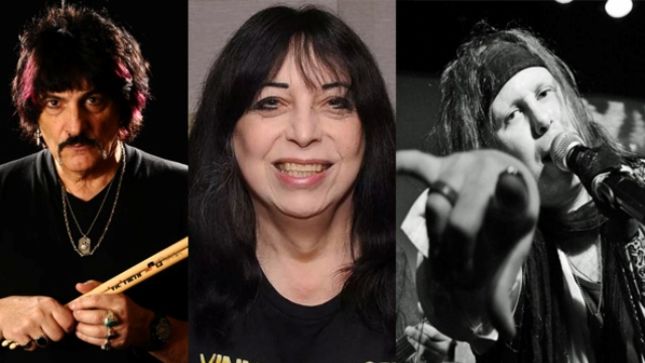 "Mr. Vincent has sent a notification letter to the promoter that he will not be performing the concerts scheduled for Feb 8th and 9th, 2019 in Nashville, TN. While we cannot discuss the terms of the contract due to a confidentiality clause within the contract, we are shocked at this development, and it is, unfortunately, beyond our control. The matter has been turned over to our attorney.

"As they say, it's "now in the hands of the lawyers," and we will update you as we can. Please check back regularly, as this site will be the only source for official updates. In the meantime, every ticket and meet & greet order will be automatically refunded in full, and you will receive a confirmation email of your refund, before or by February 10, 2019.

The shows were due to feature Vinnie Vincent backed by drummer Carmine Appice and bassist Tony Franklin. Appice spoke with WSOU about the situation, stating "I always thought that if Vinnie messed this up, or whoever messed it up, I don't know if there'll be another chance because this is his comeback. He already canceled it once, and if gets canceled again, nobody's gonna care anymore. (They'll say) 'I'm not gonna go even buy a ticket. He's not gonna show up. Or something's gonna happen.' But I was looking forward to it, because me and Tony Franklin — I love playing with Tony, and we were gonna play the Vinnie KISS songs, which would have been fun. After I saw that KISS Kruise party footage... Vinnie's always been like a showoff kind of guy, and he just stood there. He looked like he was scared to me. I asked him: 'Can you still play? You've been out 30 years.' He goes, 'Yeah. I've been playing in my house. Yeah, of course, I can still play.' I said, 'Okay. I believe you...' but I don't know what happened. It's too bad, because it would have been fun."

Jimmy Kay from The Metal Voice recently followed up by talking to Appice (Vanilla Fudge, Cactus, Blue Murder) and singer Jim Crean (Hair Nation, Appice Brothers) about the show cancellation claims. Appice and Crean correct Vincent's claims on why the show were cancelled and who cancelled them

When asked about  the recent claims by Vinnie Vincent that his promoter was to blame for the recent cancellations of the show in Nashville and Vincent's disapproval of the choice in singer:

Appice: "The promoter did nothing but try his best to make these gigs happen. The promoter, Derek Christopher, hired me because I knew Vinnie and I talked to Vinnie and we said maybe it would be cool if I did the gigs with him, and Vinnie Vincent agreed. Derek hired me and put the deal together, then I brought bassist Tony Franklin in, whom Vinnie never heard of before. Then they were going through tons of singers and I said  I have this guy named Jim Crean that can sing high just like the original Vinnie Vincent invasion singer Robert Fleischman. I told Jim Crean about it and he was up for it. Then Derek said, 'Why don't you put Jim Crean's voice on a couple of Vinnie's tracks?' and he would send it to Vinnie and see what he thinks, and that's what we did. And from what I remember, Vinnie said to the promoter that he thought Jim Crean was great.

So, we were moving ahead and waiting for a setlist, and then when we never got any set list from Vinnie the promoter sent me, Jim and Tony some lists of songs, which included Vinnie's songs and KISS songs and I thought that was what we were going to do. And then Vinnie started to steer away. And I said to Vinnie 'I saw that clip of you playing that pre-KISS cruise clip, you did not look comfortable on stage, you looked scared.' And I blatantly said 'Can you still play? You didn't do any solos.' Vinnie said to me, 'Yeah I can still play.' Then, later on, Vinnie said 'I don't want to do any KISS songs or my songs, I just want to jam for an hour and a half...' after he just put out a press release with the promoter saying 'I'm gonna do KISS songs, Vinnie Vincent songs...' This is him verbally saying that on the ad. Then he changed his mind on that and said he just wanted to jam."

Crean: "Derek called me and wanted me to sing some of Vinnie's songs, so I did that, they got back to Vinnie and they said he was very impressed with it. Derek called me the day after he talked to Vinnie and said that Vinnie was very happy with the vocals and he loves it, and we are going to make a press announcement and put a poster up as well. Then Derek called me up and said to me to lease start sharing the information to get a buzz going. So then we started promoting it and Vinnie started changing his mind."

When asked about Vinnie Vincent's statement "There's only one uncontroverted fact that actually did happen, and that is that I, Vinnie Vincent, did not cancel that show."

Appice: "The cancellations came from Vinnie. He did not want to do the gig. I gave Vinnie three other singers to pick from but Vinnie did not like them, and Vinnie said Jim Crean was good. Then Vinnie to blame it all on Derek the promoter, who is the nicest guy and is now really ill since all of this happened, is bad. Derek has not been able to stand up for himself because he has been really ill, in and out of the hospital. The last thing on his mind is Vinnie Vincent right now, he is trying to get healthy. And to see Vinnie saying it's Derek's fault, it wasn't his fault. Derek did everything he can to make these gig happen. Vinnie is saying it's Derek's fault I'm saying it's not his fault, Derek did everything and beyond to make things happen, to keep it on track. Derek brought Vinnie out of hiding, he put together that KISS expo that Vinnie came out on, that made Vinnie money, Vinnie didn't do that Derek did that."

When asked why Jim Crean was one of the scapegoats

Crean: "I don't think Vinnie Vincent should be blaming me, I was there just trying to help him out. I came into the band late and Carmine is a very high profile artist and so is Tony Franklin so I guess that leaves me and the promoter to blame. "

Vinnie Vincent fans take note: the former KISS guitarist has announced that he will perform on June 7th in Nashville, TN at Speedballjam, which takes place at the S.I.R. Soundstage. Only 60 VIP tickets are available for the event, each one at a cost of $300.00 US

The VIP tickets grant entry to the show, a meet & greet with Vincent on June 8th (1:00pm - 4:00pm) at the S.I.R. Soundstage. One item will be autographed, but getting guitars, part sor other musical intruments autographed will cost an extra $500.00 US.

Tickets are only available via PayPal through Vincent's official website. They will not be sold at the door. Your PayPal receipt will act as your ticket. It will be matched to your name on a list at the door.

Doors open at 6:30pm on June 7th. Vincent will be backed by hand-picked musicians Mike Weeks and Chuck White on the day of the show.