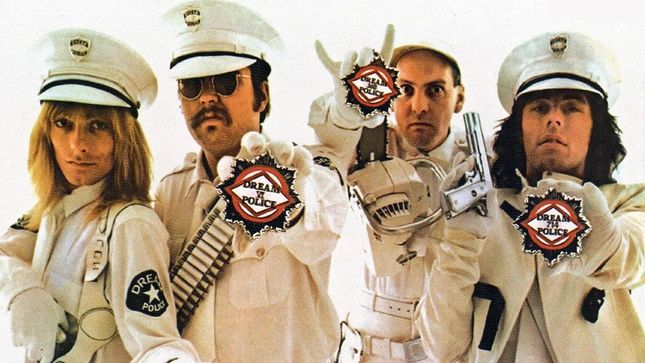 Says host Redbeard: "You may know the basic facts of Cheap Trick‘s live 1979 album At Budokan, which effectively started the Rockford quartet on a long road which now travels through the Rock And Roll Hall Of Fame, but unless you actually lived through it, there is no way to imagine what such a fluke phenomenon does to the individual heads of the band members, manager, and record label execs when it’s time to follow up, as in the case of September 1979’s The Dream Police. Obviously, the explosive success of At Budokan built tremendous momentum, inspired confidence, and triggered commitment on the part of their patient record company, but sudden runaway popularity invariably sets the expectations bar unrealistically high for everything to follow.

"We find out from my guests Cheap Trick lead singer Robin Zander and guitarist/songwriter Rick Nielsen that the band had actually interrupted recording their fourth studio album, Dream Police , in order to do that first Japanese tour in 1978. Several hits would eventually come from it, including “Voices”, ”It’s The Way Of The World“, and the title song ”Dream Police“, but those would have to wait while Cheap Trick scuttled all plans while they learned to surf the tsunami of success from the unexpected live album. 1982’s One On One release yielded "If You Want My Love, You Got It“, followed by albums helmed by famed Beatles producer Sir George Martin as well as multi-talented Todd Rundgren, in hopes of matching At Budokan and Dream Police‘s radio airplay and sales, but to no avail.

"'Tonight It’s You' from 1985’s Standing On The Edge reminded us of Cheap Trick’s uncanny knack with the big hook chorus, providing the kindling to ignite the band’s biggest hit, ”The Flame” in 1988. If there is any possible downside to its ascent to #1 in America, it would only be how that song’s massive appeal may have overshadowed the half dozen great rockers on the album Lap Of Luxury. (

"One of the things that I have loved always about Cheap Trick is how they have worn their musical influences on their collective sleeve without apology or second thought, and that may perhaps be the reason that Cheap Trick previously was never even nominated for Rock Hall consideration until now. But apparently previous inductees Nirvana, The Ramones, Guns’n’Roses, Green Day, and eventual shoo-ins Soundgarden are all on record as being influenced by Cheap Trick’s songcraft. Speaking of which, the 2016 Cheap Trick album Bang, Zoom, Crazy…Hello contained the solid mid-tempo rocker “No Direction", plus what could be the most incredible Cheap Trick song since “The Flame” called “When I Wake Up Tomorrow“. And their Hall Of Fame induction seemed to inspire another solid effort in 2017, We’re All Alright."