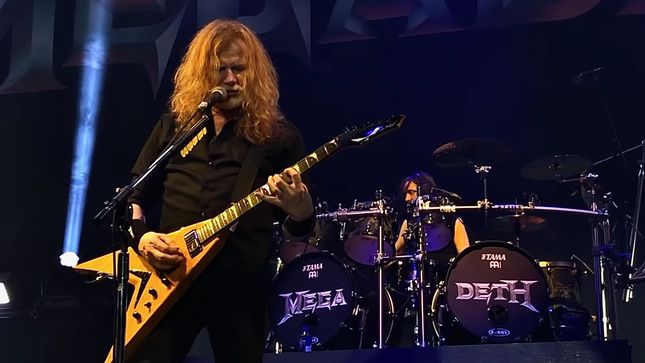 Eddie Trunk sat down with Megadeth’s Dave Mustaine for a special edition of Trunk Nation Virtual Invasion on SiriusXM’s Volume channel. Mustaine opens up about his health, his new book, Rust in Peace, and recording new material during quarantine. The Megadeth frontman says the band’s new music mostly resembles their first two records with guitarist Chris Poland and drummer Gar Samuelson, Killing Is My Business…And Business Is Good! and Peace Sells…But Who’s Buying?

Can catch the complete interview on Trunk Nation on SiriusXM’s Volume channel 106 this evening at 11 PM ET, as well as anytime on demand on the SiriusXM app.

Megadeth frontman Dave Mustaine's wife, Pamela Mustaine, has uploaded the video below, shot during the celebration for her husband's 59th birthday, this past Sunday (September 13).

She included the short message: "The happiest birthday boy!"

Rust In Peace: The Inside Story Of The Megadeth Masterpiece, by Dave Mustaine with Joel Selvin, was released on September 8. Order in a variety of limited edition autographed bundles here, and watch a short video trailer below.

A new book by the lead vocalist, guitarist, and primary songwriter of Megadeth, the original lead guitarist of Metallica, and the author of the New York Times bestseller, Mustaine.