DAVID GILMOUR To Release "Yes, I Have Ghosts" Single; First New Music In Five Years To Be Released On The Audition Edition Of POLLY SAMPSON's A Theatre For Dreamers 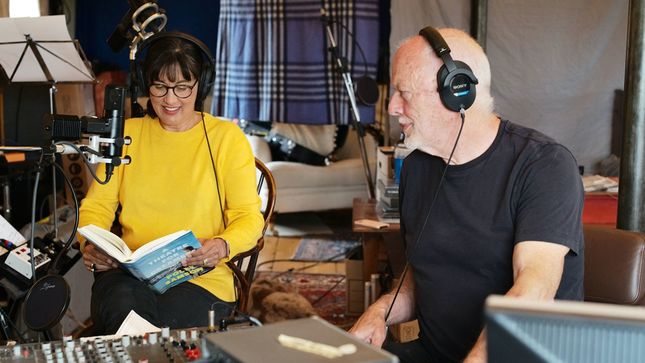 Bestselling author Polly Samson and Pink Floyd guitarist and vocalist, David Gilmour, have collaborated for the release of Samson’s forthcoming audiobook, A Theatre For Dreamers (published by W.F. Howes on 25 June 2020). The ground-breaking audiobook will premiere Gilmour’s new single,
"Yes I Have Ghosts", a week ahead of its general release.

The new song, the first from Gilmour in five years, was inspired by a character from the novel and was co-written by Samson. In addition to debuting the new single, the audiobook will feature original music from Gilmour throughout.

Polly Samson said: “We didn’t set out to work together on the audiobook, but lockdown meant I had to narrate and I’m grateful to David Gilmour for stepping in to the producer’s chair. We wanted to explore the creative possibilities of the format and produce something new, refreshing and innovative. Collaborating with David - as I have done many times over the last 30 years, writing songs for both Pink Floyd and his solo albums - we were able to bring together the worlds of literature and music to enhance the listening experience and connect with audiences in a way which I don’t think has been done before. I hope the audiobook, which was recorded in our home studio, is received with the same levels of warmth and positivity as the printed version and that listeners enjoy the fruits of our creative collaboration.”

David Gilmour commented: “Polly’s vivid and poetic writing, coupled with her very natural narration voice, made joining forces to produce the audio version of A Theatre For Dreamers a fantastic and fulfilling experience. The audiobook format has so much untapped potential, and I am surprised more musicians have not creatively collaborated with authors, narrators, and audiobook producers in this way before. The two worlds seem to seamlessly link, and music can really help to bring audiobooks to life in unexpected new ways. We were also lucky to have our daughter Romany in lockdown with us to contribute harp and additional vocals. I am really pleased and proud of how Polly’s words and my music have entwined in this audio version of A Theatre For Dreamers.”

Set on the idyllic Greek island of Hydra in 1960, A Theatre For Dreamers captures the hazy, sun-drenched days of an expat bohemian community of poets, painters, and musicians. In Samson’s fifth work of fiction, the characters live tangled lives that are ruled by their king and queen, writers Charmain Clift and George Johnston.

Dominic White, head of Publishing and Commerce at W.F. Howes, said: “A Theatre For Dreamers is a real departure for audiobooks. It is the first time the industry has ever witnessed the coming together of a literary powerhouse and a musical genius to push the artistic boundaries of what is possible with audio. We are thrilled to be working together with Polly and David to help make their creative vision a reality.”