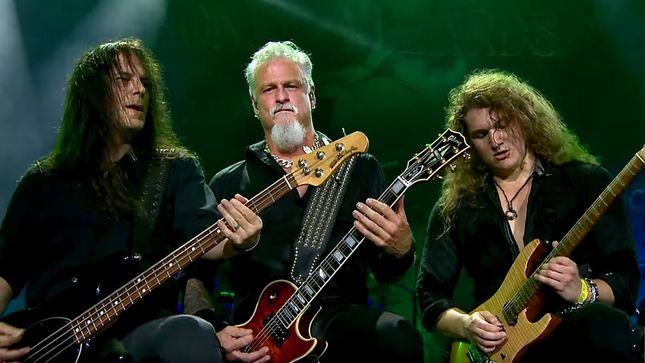 Demons & Wizards, featuring Blind Guardian's Hansi Kürsch and Iced Earth's Jon Schaffer, performed at the 30th edition of Germany's Wacken Open Air festival during their first live run in 19 years. Professionally-filmed footage of the band performing the songs "Crimson King" and "Fiddler On The Green" can be seen below:

Jon Schaffer states: “I’m excited to be releasing another D&W album after all of these years. I feel like we’ve put together something really special, and I'm looking forward to hearing what the fans think about it. I’m proud of this album. It’s definitely a journey of epic proportions.”

Hansi Kürsch adds: “2019 is an extremely exciting year for Demons & Wizards in general. We have accomplished a lot. A lot! This third album is the peak of our career for sure. Mark my words, you will love this album!”

Pre-sales for III will kick off December 13.