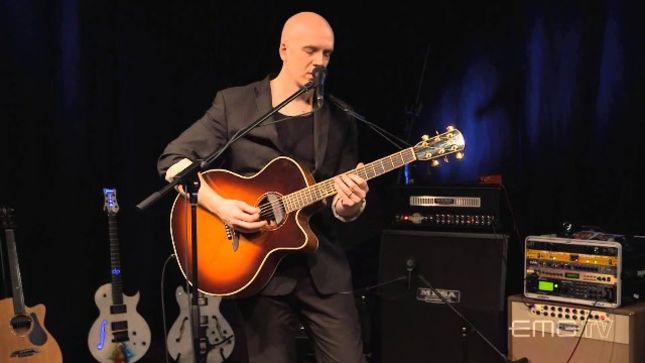 Devin Townsend will be attending the UK Guitar Show on September 21st and will perform an acoustic set, as well as hosting a guitar clinic. There are still some tickets available and using the code DEVIN20 upon check out you'll receive a nice 20% discount. Tickets can be purchased  here.

More info on this event for guitar enthusiasts can be found at UKGuitarShow.com.

Townsend recently guested on the Everblack Podcast to talk about the upcoming An Evening With solo acoustic tour through Australia, the massive task of creating Empath, songs that he has written down under including "Bad Devil" and "Planet Rain", his first ever Australian tour where he stayed in hostels, how metal is still a big part of who he is, and playing Strapping Young Lad songs live again.

Devin: "I'm doing a tour in November that's gonna be a very selfish tour for me; a ton of people onstage, playing a bunch of stuff that I've wanted to play for years, a lot of improv, a lot of really interesting things. But starting next year I'm gonna be touring everything, and that includes the Strapping stuff. I'm gonna be doing what equates to, like, what's a Best Of what I've done over the past few years. Let's make this live venture for me the best it can possibly be and learn from your past and come back out."

Townsend launched Strapping Young Lad in 1994 and put a halt to it in 2007 after the release of the album The New Black in 2006 in the interest of focusing on other musical projects.

Townsend recently announced the fourth part of his career-spanning vinyl boxset series. Eras Part 4 is set for release on August 23, and features Ziltoid The Omniscient & Z² - Dark Matters, plus the vinyl debut of Ziltoid Live At The Royal Albert Hall & The Retinal Circus - across 9 pieces of 180g vinyl inside a sturdy 2-piece boxset with an LP-booklet filled with liner notes and comments by Devin.

Devin comments: “Continuing in the Eras series is volume 4, these box sets have been very special to me in that commemorating the times and experiences of the past work allows me-for once- to stop and reflect on all the effort and time that went into documenting these moments. I’m exceptionally proud of these albums, and to have a complete set of the work at this level of quality is a dream come true for me.”