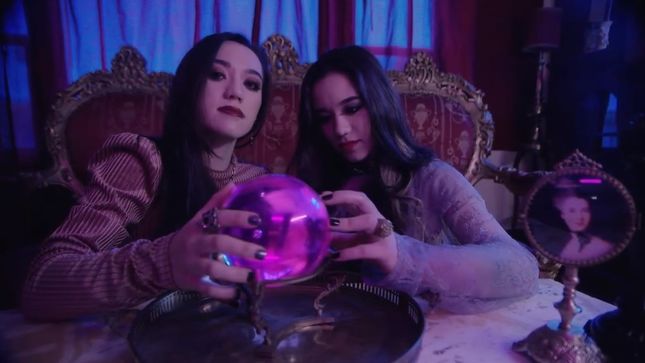 Dianthus is currently in the studio recording their brand new album Realms with producer Steve Evetts (The Dillinger Escape Plan, Symphony X, Butcher Babies), and they will be releasing a series of singles monthly leading up to the full release tentatively due in early 2021.

Jackie and Jessica had this to say about their first single “Realms”, “The idea and creation of our newest single, ‘Realms’, came from pure intuition and connectiveness to the music. We wanted to capture a variety of intense moods that resonate with the listener and cut into the dynamic dimensions of our sound. We feel that this song will speak to everyone in a unique way and mean something in a unique way. We hope ‘Realms’ casts a new sound to the rock and metal scene and is an echo of what else there is to come from the two of us in Dianthus.”

Since their formation, Dianthus has been regularly hitting the Los Angeles area making appearances at the NAMM show and sharing the stage with artist such as Crown the Empire, Dokken, Drowning Pool and Powerman-5000. Their appearances gained the likes of well-respected musicians Matt Sorum (Guns ‘N Roses/Velvet Revolver/Hollywood Vampires/The Cult) and Jeremy ‘Jinxx’ Ferguson (Black Veil Brides). ‘Jinxx’ produced their self-released album, which was recorded at Matt’s DRAC STUDIOS in Beverly Hills, CA.

In addition to teaming up of Deko Entertainment, they have also partnered with Jeff Keller at The Artery Foundation artist management. With the team in place, Dianthus is ready to bring forth their delicate, yet dominant voices to the metal scene.

Manager, Jeff Keller, states “I am incredibly excited to be working with Jessica and Jackie. Their talent is undeniable and ‘Realms’ is proof that there is nothing that will stop Dianthus from making a major impact.”

Deko Entertainment president Bruce Pucciarello had this to say about their first release for Deko, “Dianthus, Deko Entertainment's power flowers, deliver an amazing song while displaying top musical chops. I find myself wondering, ‘How can something so innocent rip the cover off a metal ball?’