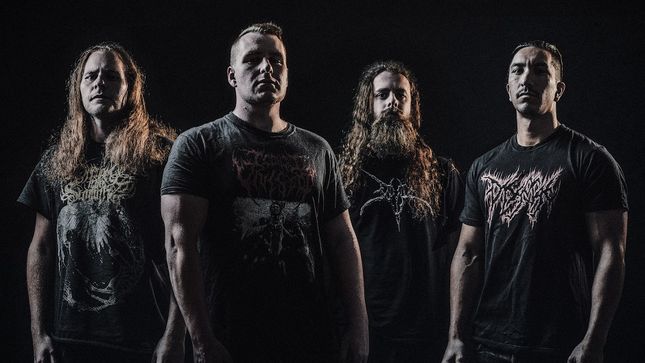 Australian brutal death metal behemoths, Disentomb, have released a guitar and bass playthrough video for the track “Indecipherable Sermons Of Gloom”, off of the group's monstrous new album, The Decaying Light. Watch below:

The Decaying Light is the follow up to Disentomb's 2014 album Misery, and contains 13 slabs of uniquely obliterating extreme metal. The album shows the band truly coming into their own and cements their place as one of the most singular and exciting bands in the genre.

Guitars for The Decaying Light were tracked by band guitarist Jake Wilkes, drums and bass were recorded by Joe Haley (Psycroptic), and vocals were tracked by Dan Field at Sledgehammer Studios. Mixing and reamping for the effort were done by Disentomb bassist Adrian Cappelletti, and mastering was done by Colin Davis at Imperial Mastering (Deeds of Flesh, Devourment).

Artwork for The Decaying Light comes from the incredible Nick Keller with the layout and design coming from Steve Crow of Condemned.

The band commented on the effort, "These 13 tracks combined make up an album we have always wanted to write and have been on the path to writing since the birth of Disentomb 10 years ago. The Decaying Light solidifies a unique sound we have worked to carve out, 13 tracks of dissonant Brutal Death that we feel is our most personal and accomplished work to date. The addition of Adrian on bass has helped Disentomb reach new levels of songwriting and cemented our sound. We understand five years is a long time between albums, especially for touring bands, and we thank our fans for their patience."

"Your Prayers Echo Into Nothingness":

Dates have been revealed for the Bloodletting North America Tour. Now in its thirteenth year, the trek, which covers a large portion of the US and Eastern Canada, will see Unique Leader artists Disentomb headlining with support coming from Visceral Disgorge, and label mates Signs Of The Swarm, Continuum, Organectomy, and Mental Cruelty.

Unique Leader Records commented, "We are beyond excited to unveil the lineup for the 13th Bloodletting North America Tour! We are incredibly happy to have the mighty Disentomb headlining alongside so many of our artists. This is definitely one of the most insanely brutal lineups of the year so don't miss out!"