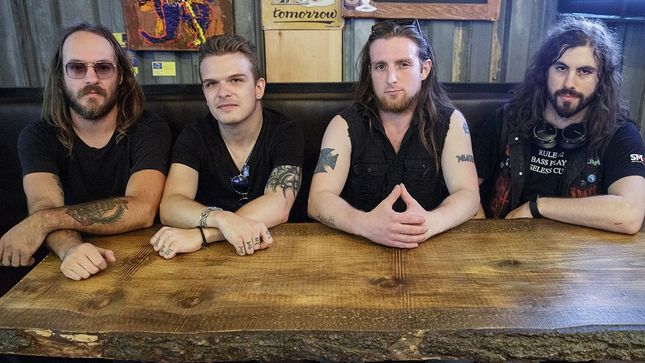 Dynamic duo Doom ‘An Blue are back with another lively music video, this time inviting collaborators to make the track “Wicked Serotonin” with vocals and bass. The recording and production on the video have taken over a year and they are pumped to finally be dropping it.

On this track, Lee Whiskey (guitar) and Jimmy Antle (drums) are joined by long time collaborators Dan Matheson on bass and Jesse James Dimitri belting it out on the mic formulating a familiar groovy song but yet, still miles aways from previous work done with others. Always driving to push the limits of themselves, Doom An’ Blue has this to say about the upcoming song:

“This may be the second or third song we ever wrote. Everything came together extremely easy, like too easy! Wicked Serotonin has always been the song we needed to practice the least because it was ingrained in our thick skulls from day one. The idea behind the video was a collaboration between us, Jesse, Dan, and Cintia. We wanted it to follow the last video and be a continuation of the story/our journey and as well, tell its own story. On the day we shot it, the concept was still quite vague but came together really fast the more we got shooting. The concept is roughly Lee and I (Jimmy), meeting with two strangers, all coming from a shitty place, and turning it around. Other aspects of the video set up the premise for the next single/video!”

With a well-received first single, “Two-Bit Son of a Bitch” (2019) under their belts, Doom ‘An Blue brings forth a truly eclectic blend of all rock styles that are further expanded with the individual styles of the many musicians they collaborate with.

“Wicked Serotonin” with guest vocals by Jesse James Dimitri and bass from Dan Matheson is streaming below: