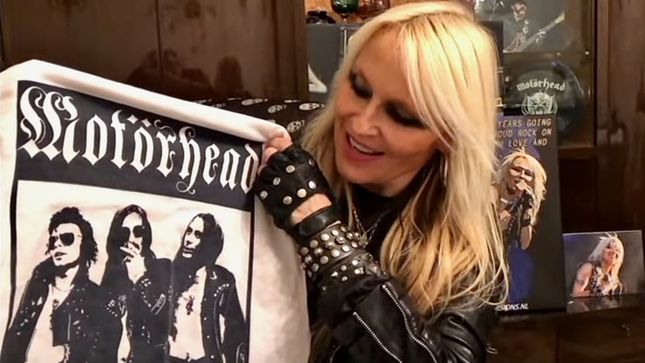 In the new video below, celebrity Motörhead fans wish Ace Of Spades a happy 40th anniversary.

Motörhead continue the 40th anniversary celebrations of the dirtiest, meanest, toughest album of them all, Ace Of Spades, with a podcast mini-series of Motörcast’s telling stories from the recording studio, on the road, behind the scenes and of Motörhead’s phenomenal growth in popularity following the release of this seminal album.

Told through interviews with a selection of guests who were in the midst of the Motör-machine during 1980 and 1981, this series will reveal all the tales, warts and all! The first two episodes are available now, with subsequent episodes released every two weeks. Make sure you subscribe to the series.

In addition to the previously announced expanded editions of Ace Of Spades and the deluxe collectors box set, the album will also be released digitally in 360 Reality Audio, a new immersive music experience utilizing Sony’s spatial audio technology, that will let listeners hear this behemoth like never before. The 360 Reality Audio content will be available on Deezer and Tidal and can be enjoyed on any headphones and also on Amazon Music HD, playing on the Amazon Echo Studio.
For additional details visit 360 Reality Audio official website here.

Henry Rollins delved into the Ace Of Spades 40th anniversary box set. Find out what he thought in this unboxing video:

Take a look inside the new, deluxe 2CD and 3LP book editions of Ace Of Spades below. They both contain a previously unreleased concert; recorded in Belfast in 1981 plus previously unseen photos, memorabilia and the story of the album.

"The riders ride, into the night. Into the west, to see who’s gun’s the best..."

Motörhead recently released a brand new animated lyric video for a previously unreleased live version of "Shoot You In The Back", recorded in Orleans in 1981. The full concert is available as part of the Ace Of Spades 40th anniversary box set. Watch the clip below:

Upon its release in 1980, the Ace Of Spades album was nothing short of a game changer for all forms of hard rock. Like lightning in a bottle, it perfectly captured everything great about hard rock, heavy metal, and punk, amped it all up to 11, and came racing out of the gates at what felt like a million miles an hour, pushing at every musical boundary. Nothing was harder. Nothing was faster. And certainly nothing was louder.

Now, following on from last year’s fan and media acclaimed anniversary editions of the seminal Overkill and Bomber albums, comes the record that launched Motörhead into the stratosphere and carved their name into the walls of rock ‘n’ roll history forever; Ace Of Spades. To celebrate the 40th anniversary of this milestone album, it is being presented in new deluxe editions. There will be hardback book-packs in two CD and triple LP formats, featuring a previously unheard concert from the Ace Up Your Sleeve tour, the story of the album and many previously unseen photos. Also, the album will be released as an ultimate fan, collector edition Ace Of Spades box set, containing a bevy of era-specific treasures and some 42 previously unreleased tracks!

A preview of "(We Are) The Road Crew" from the previously unreleased double live album Dead Man's Hand, recorded at Parc Expo in Orleans 1981, is available here.

The Ace Of Spades Deluxe box set contains:
- The Ace Of Spades album, half-speed mastered and created from the original master tapes.
- Two double-live albums of previously unheard concerts from the Ace Up Your Sleeve tour.
- A Fistful Of Instrumentals : A 10” EP of previously unreleased, instrumental tracks from 1980.
- The Good, The Broke & The Ugly. A double album of B-sides, outtakes and rare tracks.
- Ace On Your Screens: A DVD compilation of rare TV appearances from 1980-81, a live concert from 1981 and a 5.1 audio mix of the original album.
- The Ace Of Spades story. A 40 page book telling the story of Ace Of Spades through previously unpublished interviews with the people that were there. Includes never before seen photos and memorabilia.
- The Ace Up Your Sleeve tour programme
- The Motörhead Rock Commando comic.
- A set of 5 poker dice that can be played on the game board inside the box set lid.
- All encased in a classic Wild West dynamite box.
- A limited edition 7" reproduction of the Dutch Ace Of Spades, with a previously unreleased instrumental version on Side B. (while stocks last!)

In 1980, off the back of two essential albums, Overkill and Bomber the previous year, Motörhead continued to get bigger, better, louder and faster by the second. This time, on Ace Of Spades they teamed up with producer Vic Maile and came up with twelve songs; each and every one of which crams a regular band’s ten minutes of playing into an average of three. The song titles alone made ears bleed; “Love Me Like A Reptile”, “Shoot You In The Back”, “The Chase Is Better Than The Catch” and “The Hammer” were a few examples. This landmark album saw the three amigos of Lemmy, Fast Eddie Clarke and Philthy Animal Taylor at the helm of the juggernaut that was Motörhead, gaining phenomenal growth in popularity as they forged onward. The band’s and fans ideas, wants and inspirations, converged at a perfect tangent. Anyone disputing this fact need look no further than any heavy metal gig of the time and play ‘spot the Motörhead T-shirt and jacket’. They outnumbered anyone else by at least five to one. A statistic that is still accurate some forty five years since they first began!

The Ace Of Spades album release was a magical moment in rock ‘n’ roll history, an album which had enormous global impact and continues to resonate and inspire people worldwide. Fans to this day still remember where they were when they first heard it, and it immediately inspired bands worldwide to absorb the album’s energy, speed, and attitude into their own work. Ace Of Spades is ground zero for thrash, speed metal, and punk / metal crossover.

A Fistful Of Instrumentals

Side Three
“Jailbait”
“Leaving Here”
“Capricorn”
“Too Late, Too Late”

The Good, The Broke & The Ugly

"Ace Of Spades" Live In Belfast: