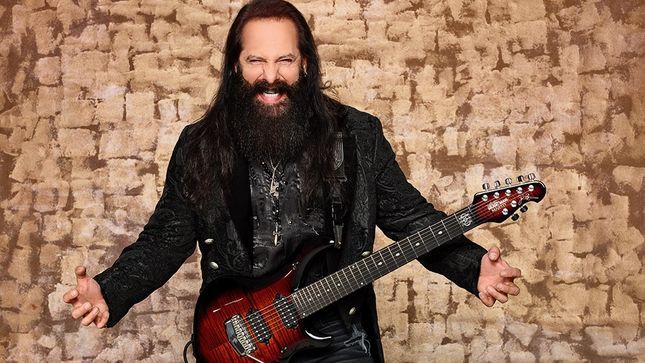 In a new interview with Sweetwater, Dream Theater guitarist John Petrucci discussed the making his new instrumental solo album, Terminal Velocity. Bassist Dave LaRue is also part of the chat. Check it out below.

On recording with Mike Portnoy and Dave LaRue:

Petrucci: "Mike doesn't live that far from me in NY, so he was able to actually come to my studio and track his drums in person. So after I'd written the music, tracked all the guitars, we actually programmed drums as well, I played bass, so the songs existed as actual songs, and I started sending them to Dave. I sent them to Mike, he basically learned them, but he asked me, 'Hey, do you want me to play this exactly the way you have programmed?' I was like, 'No, I want you to do your thing.' He's like, 'Good, because I'm not really that kind of a drummer.' He likes to do things kind of more instinctually; he's always been that way. And I said, 'Absolutely, 100%, bring that to the table.' So he came in and started tracking.

"Dave had started working on a couple of songs simultaneously, but as we were tracking drums, and if there were things in that there that Mike did, I would let Dave know. 'Hey, see if you can catch that. Mike changed the feel there, he's doing more of a triplet thing. Can you catch that fill?'. We did that a bunch of times."

LaRue: "At that point, it became apparent that I should wait for Mike to do the tracks. So as Mike would finish tracks, the new drum tracks would show up in my box, so I would load them into the session and then work with what the real, final drums were going to be. That saved a lot of time, although as John said, on a couple of the early tunes, we made a few revisions to match some of the cool things that mike had thrown in. John was like, 'Oh, he does this cool fill, throw something in.' So we changed a few things, but that made it apparent that we might as well just wait. The pace I was working at, Mike was moving right along, so I was like, 'OK, send them to me and I'll follow those up,' and that saved us a lot of time and revisions."

Petrucci: "One of the concerns I had was that because I tracked all the real guitars in a session to a click, there really wasn't any room for Mike in this case to kind of like push and pull and do any sort of ebb and flow thing, which he likes to do as a drummer; I know that from experience. But somehow, just the way that he tracked, it kind of like felt like... between him doing that, Dave responding to what he was doing, it sounds like a trio playing together to me, it doesn't sound like it was recorded the way that I'm describing."

Terminal Velocity, the first solo album by the Dream Theater guitarist to be released in 15 years. The album was released through The Orchard Music on his Sound Mind Music record label on all digital and streaming platforms on August 28th. It will be available on CD and Vinyl on October 30.