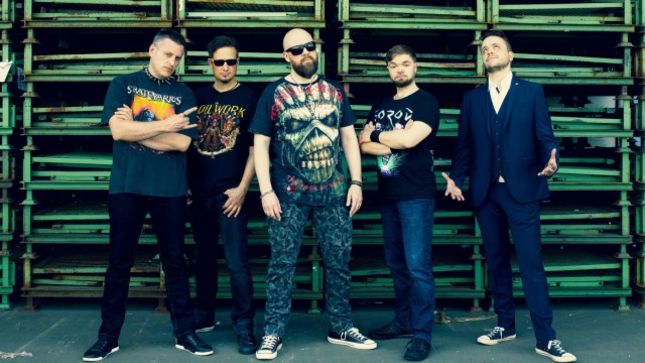 Exclusive to BraveWords, German progressive metallers M.I.GOD. premier their new video, "Tears Of Today", which can be viewed below. The song is taken from their new concept album, Specters On Parade, which was released earlier this year.

BraveWords spoke with frontman Max Chemnitz leading up to the video release about the song, which stands out as being different from everything else on the album.

Chemnitz: "We don't think about that when we write songs... about the sound of the song or fitting in somewhere. When we write it's just a moment in time. It's more of a case of choosing afterwards; would that song fit on the album? The thing was, I thought about having a break on the album, a turning point (in the album concept), and I don't think that would have worked if we had chosen a heavier, more metal-oriented song. We don't have a comfort zone, so to say, and it's not like we're trying to take a big step in another direction if we write something more mellow or brutally heavy. We could have written 'Tears Of Today' on the same day as 'Solitary Ghost'. 'Tears Of Today' is one of three songs that we chose really early on, before the album was mixed, that we wanted to make a video for or release as a single. It's an important song for us."

German bashers M.I.GOD. have been kicking around for close to 20 years, releasing albums as time and resources allow, earning themselves a small but respectable following along the way. The international market was never the focus so there was never a serious push in that direction, but after the release of the Floor 29 album in 2012 things went quiet, messing up any forward momentum they may have had. This year the band returned with Specters On Parade, an album unlike anything in the M.I.GOD. catalogue. Meant as a concept record, reviews have been all over the map, with one reviewer going so far as to simply call the album “shit.” The band good-naturedly shared said small-minded review via social media, knowing full well that no matter how poorly some people react to Specters On Parade, it is most certainly not the slab of crap they would have you believe.

In actual fact, Specters On Parade is the best album M.I.GOD. has released to date and it’s worthy of international attention. It plays out like a movie, taking the listener on a journey in the same way a film soundtrack offers up an act-to-act or scene-by-scene tapestry.

“I’m a really big movie fan,” says Chemnitz, “which I think is pretty obvious when you listen to Specters On Parade, and that’s how I laid it out. I had no idea how to make a concept album; I just had an idea, I guess you could say, in the context of making a movie. The main thing was that I had a running order for the songs, like a setlist. In my mind it was fixed. But, that idea was created before I had the lyrics (laughs). I only had the music for 10 songs, and I had to put them in order to tell the story, I guess you can say. For example, I wanted to end the album with a really big song, ‘Specters On Parade’, but as I wrote the lyrics that song became the central topic and I had to move it up to the middle of the tracklist. And when I was writing the songs, I realized I would have to make time jumps between them to make the concept move forward, to show that a few months had passed or whatever. That’s why we put the little scenes between the songs.”

For Chemnitz, having Specters On Parade lumped in with metal royalty like Savatage’s Streets, Queensrÿche’s Operation: Mindcrime, Dream Theater’s Scenes From A Memory or even Extreme’s Pornograffitti is an accolade of the highest order.

“It leaves me speechless, really. It’s the biggest thing I could wish for because I love those albums, like Operation: Mindcrime, and I still listen to them. I’m really grateful when I hear things like that.”

Read the complete interview here. Check out the BraveWords review for Specters On Parade here.